(Minghui.org) Due to propaganda from the Chinese Communist Party, a large number of Chinese people have been deceived and turned hostile towards Falun Gong practitioners and the principles of Truthfulness-Compassion-Tolerance. Taiwanese practitioners, who speak the same language and share similar cultural backgrounds, have thus been reaching out to mainland China, through phone calls and the Internet, to explain what Falun Gong really is and debunk the hate propaganda.

Practitioners gathered at Chongguang Elementary School in Taichung on August 7, 2016 to share their experiences of this kind. Similar discussions have taken place every summer for the past several years, with a goal of doing better in cultivation and saving more Chinese people. 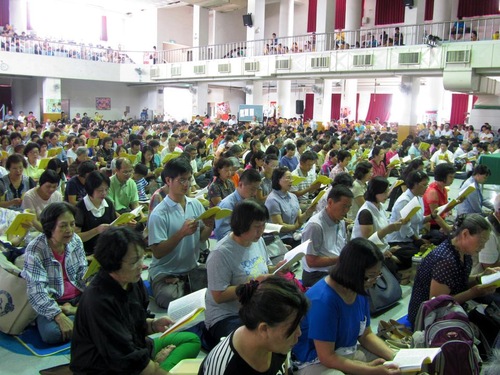 Practitioners gathered at Chongguang Elementary School in Taichung on August 7 to study the Fa and share their experiences.

Lifen in Taoyuan said she gradually learned the importance of improving her xinxing: “Once, after I greeted a person in mainland China on the Internet, that person kept laughing at me and made fun of me using foul language.” Lifen told him that she made the phone call to tell him about the severe persecution as well as the importance of Truthfulness-Compassion-Forbearance. But the person still refused to listen.

Seeing no progress, Lifen told him that she would leave him some information before hanging up the phone. She then posted some messages summarizing the bad deeds committed by the Communist Party, including the self-immolation hoax on Tiananmen Square. To her surprise, that person changed his attitude totally after reading the material and said, “I believe you now.”

From this experience, Lifen said she learned that even if a person appears very vicious, there is still a chance that he can be saved.

Another person, who refused to listen to Lifen's words, contacted her again eight years later and told her that the tool she had provided to circumvent Internet censorship was very useful and allowed him to read overseas news. Upon learning how the Communist Party suppressed Falun Gong with brutality and lies, he renounced his membership in the Communist Youth League.

Jinlian shared, “I often made phone calls to China. But it was not so easy.” Sometimes the number did not work, and sometime the recipient kept swearing at her.

Jinlian reminded herself be calm, compassionate, and well-prepared. She thought through the process, went over the basic facts, and planned for various situations that she might run into. She said, “I always told myself that I have to save this person.”

The outcome has been good. Almost 100% of the phone numbers connected, and many of the recipients listened quietly for several minutes until they were provided with followup information, such as an overseas phone number to report key perpetrators or information on circumventing Internet censorship.

Helping to Pass On Information

With QQ and other social media tools, Wang Jinluan in Taichung reached out to people in mainland China, telling them real stories of Falun Gong and answering questions.

While speaking with a college student, Jinluan asked him to not judge something before looking into it closely. That student agreed, and Jinluan sent him a copy of the book Zhuan Falun. Two months later, the college student sent six books on traditional Chinese culture back to Jinluan to show his appreciation.

Another time, she was chatting online with a village chief. It was Chinese New Year, and people often visited each other for greetings. After Jinlian asked if the chief would tell others the facts about Falun Gong, the chief reached out to residents, one by one. Several days later, he came back with a list of 515.

This person was rewarded for his good deeds. He said happily to Jinluan, “The business I am doing is getting better and better now.”

Relating the Facts to People Face to Face

Clarifying the truth to Chinese tourists sometimes presents challenges. When Qiuxiang in Penghu wanted to set up some poster displays for Chinese tourists, the authorities denied her request, saying that the facility was co-managed by the military and local government.

Knowing how important it is for tourists from China to learn the facts, Qiuxiang did not give up and continued communicating with the officer. The officer learned a lot from her. He then accepted a copy of Nine Commentaries on the Communist Party and approved her request.

Another officer said that he approved of what practitioners were doing, “But the Communist Party is powerful. Will your efforts work?” Qiuxiang explained what she had seen and learned. The officer nodded and left with a copy of Nine Commentaries.

One tour guide complained that her speaker was too loud. Qiuxiang apologized and reduced the volume. They later became friends, and the tour guide often told his tour group, “Falun Dafa is good!”

Huazhen in Southern Taiwan shared her experience of teaching computer skills to elderly practitioners. “At the beginning, they learned very slowly and always told me to slow down.” She was frustrated and wondered why these practitioners were so slow.

As she continued to study the Fa, she realized that one has to make progress step by step. She became more patient and compassionate. Remarkably, the practitioners she was teaching also started learning much faster.

With the popularity of smartphones, Huazhen noticed the importance of sending multimedia messages to Chinese people. It took her some time to learn the technique and introduce it to others. However, everything is now working well.

“Everyone is different, and we cannot expect others to be the same as ourselves,” Huazhen explained. “More importantly, I learned to open my heart this way.”