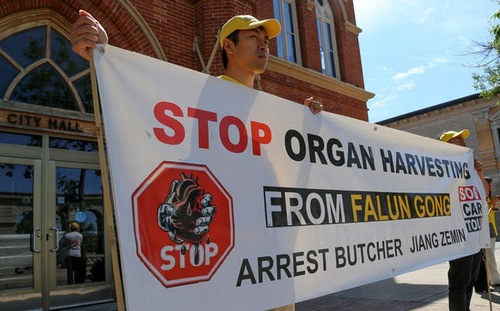 The report stated, “A Chinese spiritual discipline which combines meditation with a moral philosophy - gathered in front of Belleville’s city hall as part of a tour of Ontario cities.”

“Since 1999 the Chinese government has been engaged in a nationwide crackdown on the practice of Falun Gong with a great number of its practitioners arrested and sent to labour camps.”

The reporter interviewed Xiuzhi Wang, a practitioner at the rally. “One of those sent to the camps was Xiuzhi Wang, who now lives in Toronto with her husband Arek Rusek.”

“Wang was arrested in 1999, released after a year and then arrested again in 2003 - this time for two and a half years.”

“'She was given a whole series of medical tests. She didn’t know it at the time but later on we found out the tests were to determine your blood type, and your liver type,' said Rusek. 'The tests you give to future donors.'”

“For the last year she was imprisoned she was removed from the labour camp and instead kept in a 'small room,' said Wang.”

“'When they put a practitioner in a small room, that’s when they do the organ harvesting to you,' she said.”

“While Wang avoided that grisly fate there are a great many who haven’t, said Rusek. Guda Zhen, who was imprisoned in China just six months ago before being released and coming to Canada, stood on a Front Street corner, handing out pamphlets and gathering signatures for a petition to the UN.”

The report described, “The handout, consisting of a section titled The Anatomy of Mass Murder, contained some harrowing information.”

“'In Canada the median wait time for a kidney transplant is between two and 5.8 years,' it reads. 'In China the instant availability of organs in over 700 transplant-capable hospitals has led to the chilling conclusion that a kill-on-demand process for organ procurement is in place.'”

“Between 60,000 and 100,000 transplants a year have occurred since the year 2000, with Rusek estimating this would place the total number of transplants, and possible deaths, in that period to more than a million.”

“The group contends non-consenting 'prisoners of conscience' are the primary source of organ procurement in China, with incarcerated Falun Gong practitioners being the main target.”

Rusek added, “It turns out the practice is done systematically throughout the whole country and a lot of hospitals are doing it. It’s state controlled.”

“It’s such a horrible crime that a lot of people can’t fathom; they can’t understand how the government can do this kind of thing to people.”

“Rusek likened what is happening in China today to the German concentration camps of the Second World War.”

“'A lot of people didn’t believe it either, and then in 1945, when everything came out, a lot of people were shocked,' he said. 'There was a resolution passed at that time saying ‘never again’... where people are killed on such a mass scale and we believe that’s what’s happening in China now because there’s been over a million people now who have had their organs harvested.'”

The article concluded with Wang's words, “'I just hope more people know the truth and to stop the persecution in China because many, many practitioners in China are in jail and they really suffer,' said Wang. 'I want more people to know the truth.'” 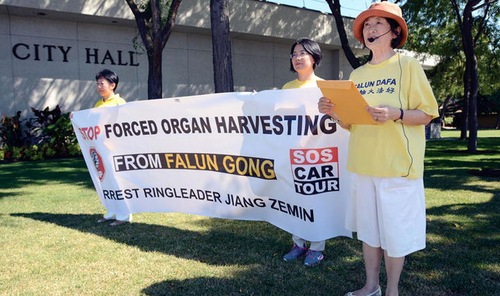 Falun Gong practitioners held a rally in front of the City Hall of Kelowna, Ontario, Canada.

The Daily Courier reported on the practitioners' rally in front of the Kelowna, Ontario City Hall. 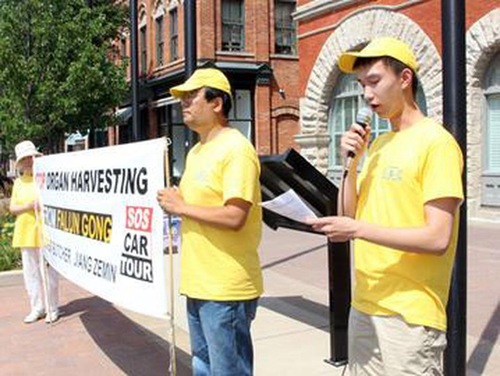 Practitioners held a rally in front of City Hall in Collingwood, Ontario, Canada on July 27, 2016.

Simcoe.com carried a report on the rally in Collingwood, Ontario. 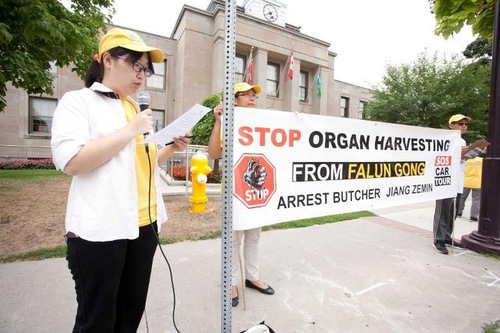 Practitioners held a rally in front of City Hall in Peterborough, Ontario, Canada on July 28, 2016.

The Peterborough Examiner reported the practitioners' rally in Peterborough, Ontario on July 29, 2016. 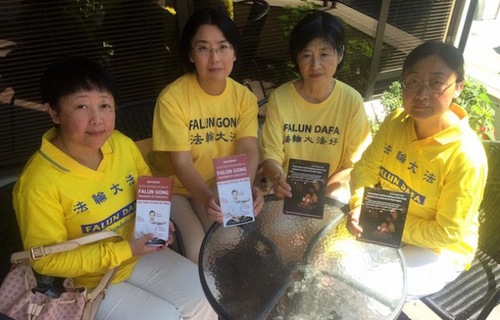 Castanet.net carried a report of the practitioners' awareness raising activities in Kelowna, Ontario on July 29, 2016.