(Minghui.org) The Chinese state-sanctioned forced organ harvesting from prisoners of conscience, including Falun Gong practitioners, became a focus of media attention during the 26th International Congress of The Transplantation Society in Hong Kong from August 19 to 23, something the Chinese government did not expect.

The New York Times published four reports on the issue. On August 19 the president of the Transplantation Society, Dr. Philip J. O'Connell, is quoted as saying, “The Chinese claim that the world accepts its organ transplant system is rebutted.”

Dr. O'Connell said to the Chinese speakers at the convention,“It is important that you understand that the global community is appalled by the practices that the Chinese have adhered to in the past,” according to The New York Times article.

On August 18, the evening before the convention began, two Chinese state-run associations held a special session on organ transplantation in China. The speakers at the special session included Huang Jiefu, former vice minister of health, and Zheng Shusen, the director of the hospital affiliated with Zhejiang University, two top figures in the Chinese organ transplant community.

Surprisingly, or maybe not, the only reporters allowed in the special Chinese session were from the Chinese state-run newspapers and TV stations and a few Hong Kong pro-communist media.

The next day, more than 20 Chinese media told the world the same story–that this special Chinese organ transplant meeting showed that the Chinese organ transplant world had been truly accepted by The Transplantation Society, and Huang Jiefu vehemently denied the accusation leveled by the international community against Chinese forced organ harvesting.

In the New York Times article on August 19 Dr. O’Connell said, “So they may say that, but that’s not what the truth is.”

A group of physicians and ethicists published an article in the American Journal of Transplantation, criticizing “the decision to hold the conference in China as premature” according to The New York Times article “Debate Flares on China's Use of Prisoners' Organs as Experts Meet in Hong Kong” on the 17th.

More than 10 papers submitted to the convention were rejected because of the unclear sources of organs. The director of the hospital affiliated with Zhejiang University, Zheng Shusen, was invited to speak, but his speech was cancelled, and his paper is under investigation. Zheng missed the opening ceremony and returned home before the meeting started.

At the press conference on August 19, Dr. Jeremy Chapman, the former president of the Transplantation Society, said that Zheng's paper may have violated the society's rule that no organs from executed prisoners be used in research, although Zheng's name was not mentioned.

If it turns out that the authors did violate the rule, Dr. Chapman said, “Then they will be named and shamed, and they will be excluded from our meetings forever — and from publication in transplantation journals.” 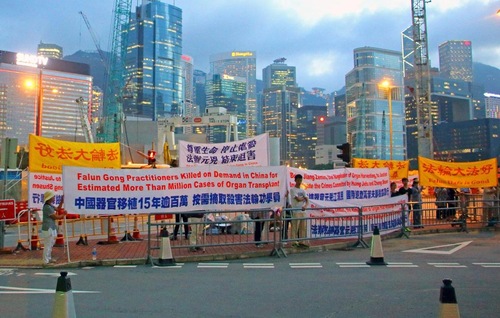 Falun Gong practitioners hold a protest outside the conference venue.

In June 2016, three independent investigators from Canada and the U.S.—David Kilgour, David Matas, and Ethan Gutmann—published a 680-page joint report on the state-sanctioned organ harvesting in China. The report estimated that 60,000 to 100,000 organ transplant surgeries have been conducted in China every year, the majority of which used organs from Falun Gong practitioners.

Zheng Shusen, 66, is one of the most experienced liver transplant surgeons in China. According to the state-run publication Guangmingwang and the China Association for Science and Technology, Zheng has carried out 1,850 liver transplants as of March 2016.

According to an article on the website of his institute, the Center for Liver Transplants, on January 28, 2005, Zheng once performed 5 liver transplants in one day and 11 total in that week alone.

Zheng told the media in 2006 that, from 1992 to 1998, there were only 78 liver transplants in the whole country, but this number has increased dramatically since 1999, which coincides with the beginning of the persecution of Falun Gong in 1999.

What stands out in Zheng's experience is “liver transplants for acute hepatic failure” (LTAHF), which refers to patients who must get a liver transplant within 72 hours or die. Based on the data from Zheng's research papers published in 2005, his institute carried out 46 LTAHF procedures from January 2000 to December 2004.

Since this kind of transplant cannot be pre-arranged, it is extremely rare in Western countries. However, among 4331 cases listed in the official Chinese Report on Liver Transplant Registration in 2016, 1150 were LTAHF procedures, or one quarter of the total.

The large number of LTAHF cases is considered strong evidence of the existence of organ harvesting from living people in China.

It is noteworthy that Zheng is the vice chair of the Provincial Anti-Cult Association in Zhejiang Province. One of the major functions of this state-run association in the last two decades has been to aid and abet the communist regime's persecution of Falun Gong.

Zheng himself has been actively involved in slandering and vilifying Falun Gong. He was the chief editor of a book published in 2009 that defames Falun Gong.

Although Zheng never revealed the source of his organs in his papers, his role in the anti-Falun Gong campaign certainly suggests a convenient source of organs to supply the immense organ transplant industry in China.

“Putting the Principles of Truthfulness-Compassion-Forbearance into Practice”