(Minghui.org) [Editor’s note: Ms. Li Li used to be an associate professor at National Prosecutors College of the P.R.C., but she was fired shortly after the Chinese communist regime launched the persecution of Falun Gong in July 1999.

She was sentenced to a 9-year prison term in 2004 for refusing to renounce Falun Gong. She was subjected to various forms of abuse while imprisoned.

With no pension and no low-income subsidy, she struggled to make a living after her prison release. She died on November 6, 2015 in her rental place in Beijing. She was 62 years old.

It was discovered that she had written down what she went through since 1999. There were also drawings that accompanied her personal account.]

My name is Li Li, and I was born on September 27, 1954. I was formerly an associate professor at National Prosecutors College of the P.R.C. I began practicing Falun Gong in 1992 and enjoyed good health, body, and mind. 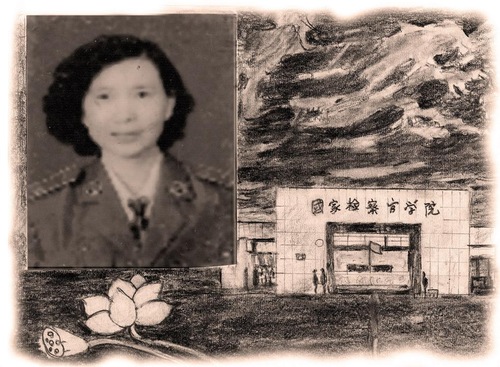 Drawing 1: Ms. Li’s picture on the left; the sign on the right reads “National Prosecutors College of P.R.C.”

I was removed from my teaching position and investigated after the Chinese communist regime began to persecute Falun Gong on July 20, 1999. Not long afterwards, my school terminated me and revoked my pension, even though I had worked there for 24 years. My school-assigned apartment was also taken away, leaving me with no shelter or income.

I was forced to live away from home in January 2001, as I didn’t want to get arrested.

The police arrested my son several times, trying to coerce him into revealing my whereabouts. He was deprived of sleep and interrogated. My parents and other relatives were also harassed and had their phones tapped and mail checked. A few relatives lost promotion opportunities because of my refusal to renounce my belief.

I was arrested on January 1, 2001, while living in Shenzhen, Guangdong Province, for distributing information about Falun Gong. I was sent back to Beijing one month later. One officer slapped me in the face, and another one kicked my legs. They waited until the swelling on my face subsided before taking me to my cell. 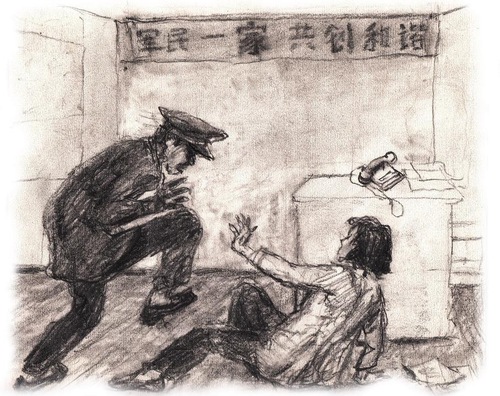 Drawing 2: The sign (ironically) reads “Police and citizens are one family and work together to create harmony.”

I was sentenced to a nine-year prison term in March 2004, and sent to Beijing Women’s Prison. The guards ordered me to sleep on a table instead of a bed since day one of my admission. I wrote a letter to the prison director, but the guards didn’t allow me to mail my complaint. 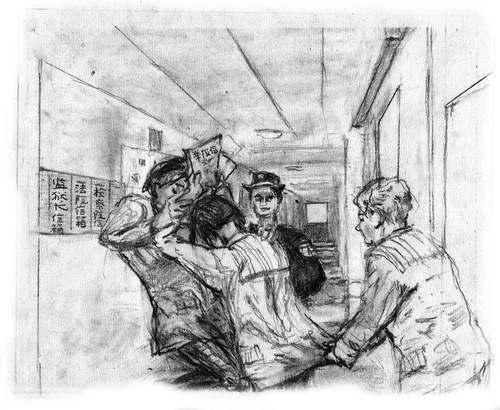 Drawing 3: The guards tried to stop her from mailing her complaint; the piece of paper in her hand reads “A letter of complaint.”

While in prison, I was often forced to sit on a small bench for extended periods of time. 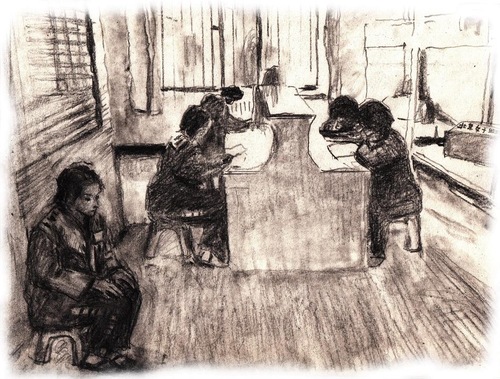 Drawing 5: Sitting on a small bench.

I was also forced to make moon cakes. One of my assignments required me to carry heavy boxes up to the fourth floor. It was so hot then (around July) that my clothes became soaked in sweat. 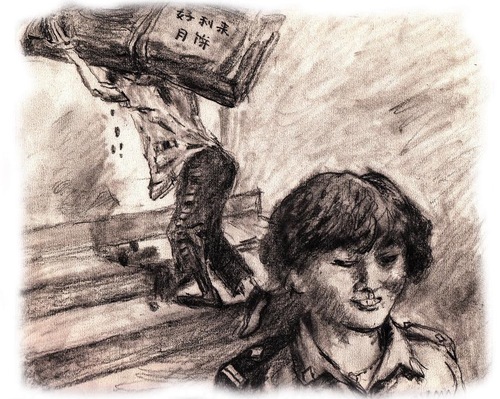 Drawing 6: The Chinese characters on the box read “Haolilai Mooncake.” 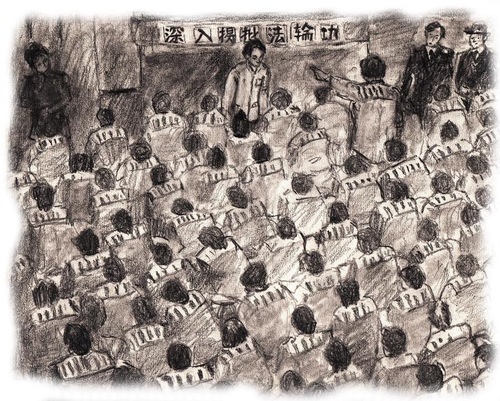 I was once taken to a room, where the guards removed the surveillance camera. As soon as I came in, several inmates grabbed me and threw me onto a bed. They wrote words slandering Falun Gong on my back. They also stuffed slips of paper with slanderous words into my underwear. 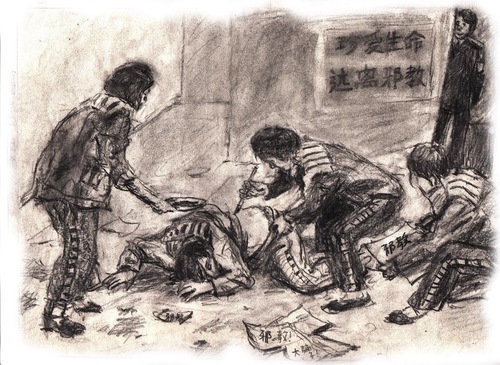 Drawing 7: The sign reads “Cherish life and stay away from cults.” [Editors’ note: These are commonly seen slogans posted by the regime designed to slander Falun Gong.]

The walls, floor, and even the bathroom were covered with words slandering Falun Gong. The guards ordered me to step on the words “Falun Gong,” but I refused. They then dragged me around against my will. 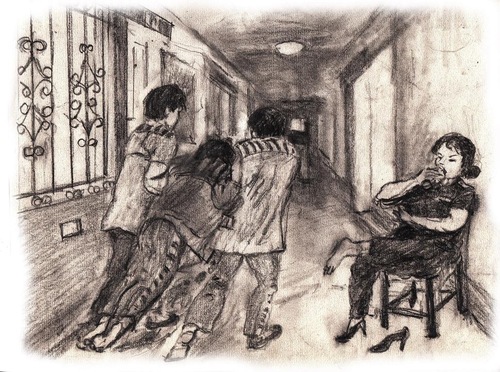 Director Zheng stomped on my body with her high heels. She also verbally humiliated me, trying to get me to give up my belief. 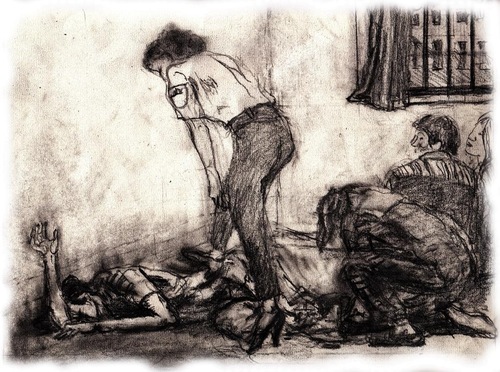 Drawing 9: Stomped on by a guard wearing high heels.

One time the guards forced me to stand for 14 consecutive days. Two inmates monitored me while knitting sweaters for the guards. My feet, legs, and hands became extremely swollen afterwards. I eventually fell and got a big bump on my temple. The blood seeped into my eyes. 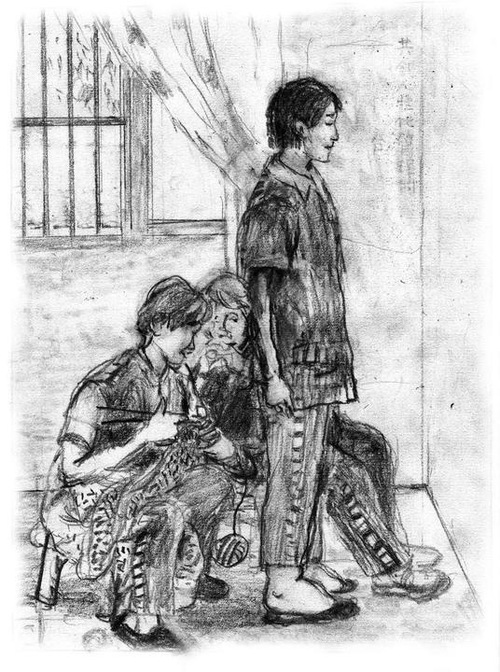 As if that was not enough, some inmates made a tall “dunce” hat covered with slanderous words and put it on my head. It felt like the cultural revolution had returned. 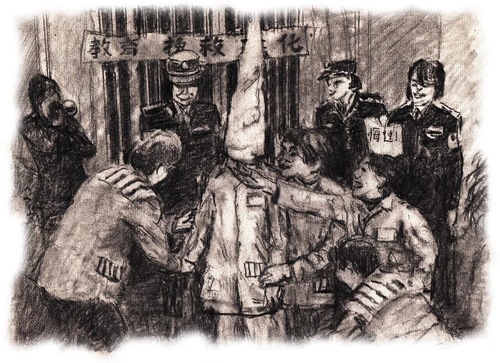 In the later years of my imprisonment, the guards moved me to a different division where I was forced to study Buddhism. There were bulletins everywhere with Buddhist scriptures. I was ordered to transcribe Buddhist scriptures, sometimes for 24 hours straight. My hands became numb and I was disoriented.

[Editor's note: It's not that Falun Gong is at odds with Buddhism, but that the authorities use all kinds of things, even religious scriptures, in an attempt to confuse practitioners and wear down their will to believe in Falun Gong.] 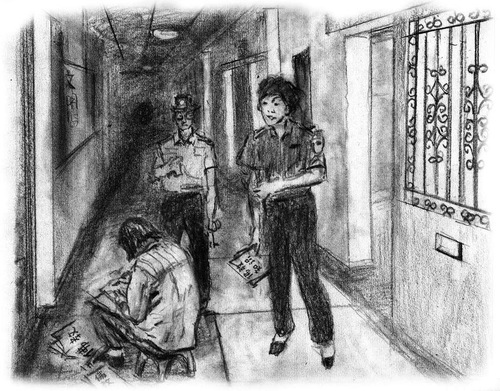 I was also forced to package chopsticks for a period of time. I felt like a non-stop machine. I didn’t dare to drink water because there were no restroom breaks. Before long, my face turned yellowish and I began to urinate blood. I also developed edema all over my body. 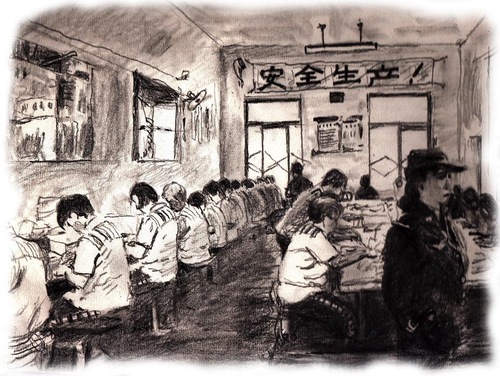 After being released, I had no pension (as it was revoked years ago), nor was I given the low-income subsidy I was entitled to. I had no place to live and had to go from place to place. After nine years in prison, I was now weak and destitute, and struggling to survive.