(Minghui.org) Falun Gong practitioners held rallies recently in front of embassies and consulates, to protest the Chinese government denying Wang Zhiwen, a former well-known coordinator, from traveling abroad to visit his daughter in the U.S.

Wang was one of the main coordinators for the former China Falun Dafa Association (Falun Dafa is also known as Falun Gong). He was arrested in Beijing on July 20, 1999, when the former head of the Chinese Communist Party (CCP), Jiang Zemin, ordered the persecution of Falun Gong.

Wang was imprisoned for nearly 15 years, during which time he was tortured by various means. His teeth were all broken, his nails were pierced with sharp picks, and he was deprived of sleep for up to seven consecutive days. He was handcuffed and restrained with 50 pound shackles while being locked in a tiny cell alone.

Mr. Wang was recently barred from leaving China to reunite with his family in the United States.

Falun Gong practitioners rallied in front of the Chinese Embassy in Paris on the afternoon of August 17, 2016, protesting the regime's rough violation of Wang Zhiwen's right to travel. 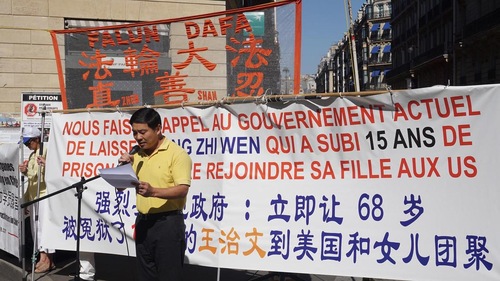 Mr. Tang Hanlong, chairman of the Falun Dafa Association in France, speaks at the rally. 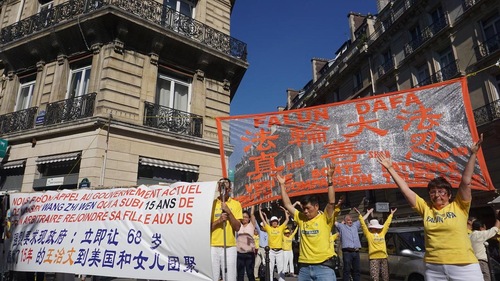 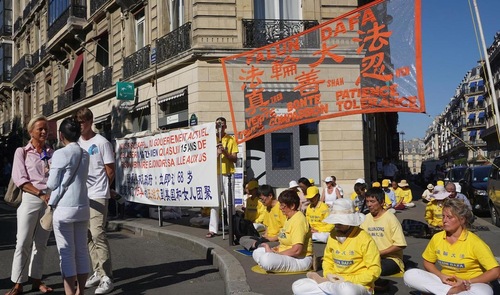 Mrs. Suzanne Boulier (left), a passerby and her son, said that the regime breaking up Wang's family was a hateful act. She said, “I believe the only way to reunite the family is to put international pressure on the regime and let them be ashamed.” 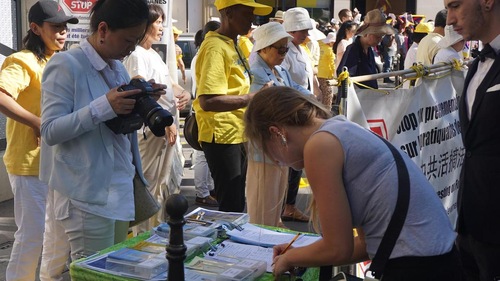 Ms. Matthias Seddik (right) signed a petition to stop forced organ harvesting in China, and said, “This gentleman (Wang Zhiwan) has suffered and was treated terribly. He was separated from his daughter. This is his basic right, to travel and reunite with his daughter in the United States.” 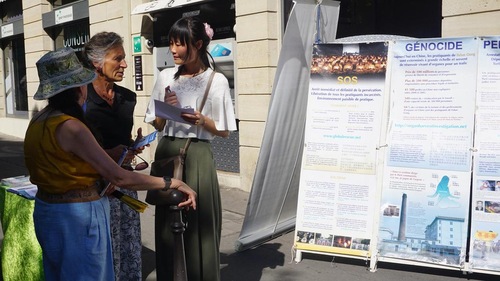 A peaceful protest near the Chinese Consulate in Zurich caught the attention of many passersby on August 16, 2016. 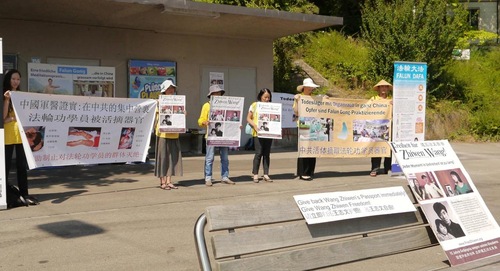 Falun Gong practitioners protest at the Chinese Consulate in Zurich for the regime's recently barring Wang Zhiwen from traveling to the United State to reunite with his daughter. 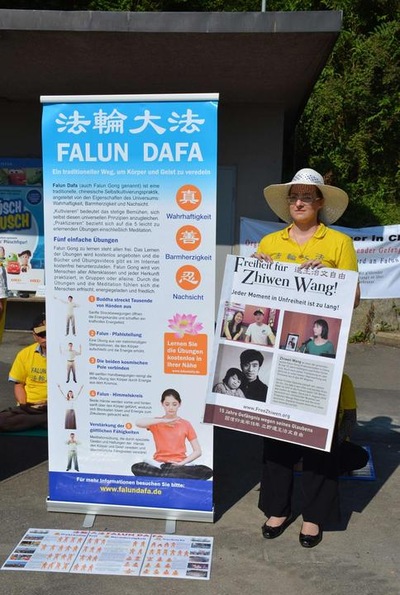 Practitioner Simone hopes Wang Zhiwen will be re-issued a passport and reunite with his daughter. 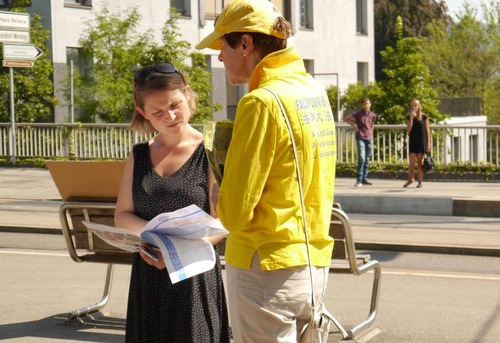 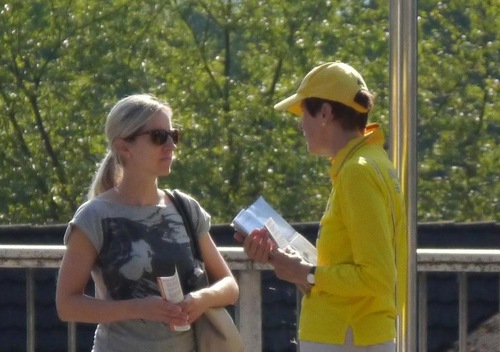 The practitioners also delivered a public letter to the consulate officials, urging them not to comply with regime's order to persecute Falun Gong, and asking the Chinese government to reissue Wang's passport and lift the travel ban.

Practitioners protested at the Chinese Consulate in Edinburgh on August 15, 2016. 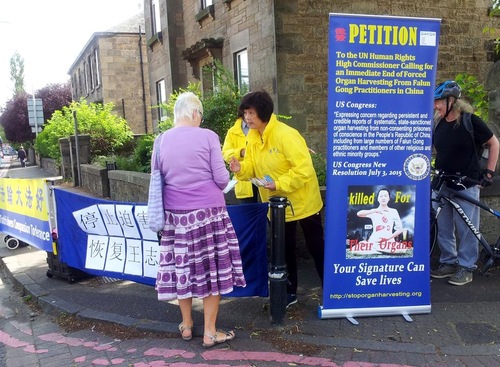 Practitioners protest at the Chinese Consulate in Edinburgh on August 15.

Practitioner Christina said that she had experienced the regime's abuse of power herself. She was denied a visa to travel to China because she practiced Falun Dafa.

Practitioners said they would continue the protest at the consulate every week until Wang reunited with his daughter.

Practitioners of Italy protested at the Chinese Consulate on August 17, 2016. 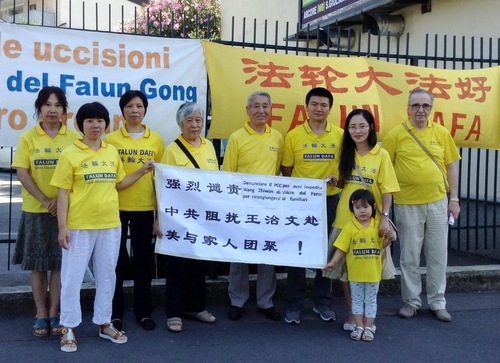 Mr. Lan, a Chinese practitioner from Beijing, said he remembered that Wang Zhiwen was a righteous and kind-hearted man. He said, “Wang Zhiwen was well known for his outstanding work as a railway engineer, and for his volunteering in the community.

“He was jailed for 15 years and now the regime forbids him to reunite with his daughter. The regime is inhuman and heartless.”

Anna, a practitioner who fled the regime after many years in jail for practicing Falun Dafa, said that this was one more tragedy created by the regime. She said, “Think about this, 15 years in prison, deprivation of freedom of travel and belief, and separated from his family. The regime is creating a tragedy.”

Practitioners rallied at Chinese Embassy in Copenhagen on the afternoon of August 17, 2016. They protested the regime destroying Wang Zhiwen's passport and barring him from reuniting with his daughter in the U.S. 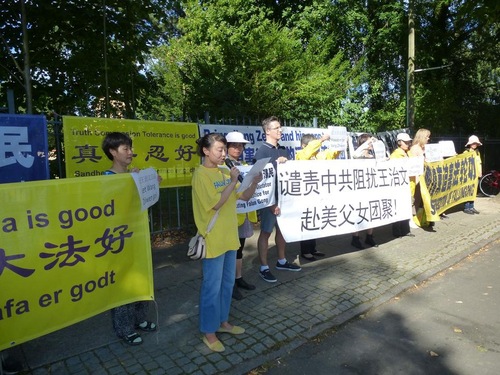 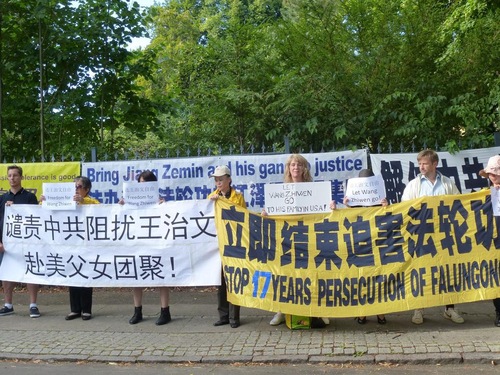 Falun Dafa practitioners protest at the Chinese Embassy in Copenhagen on August 17. 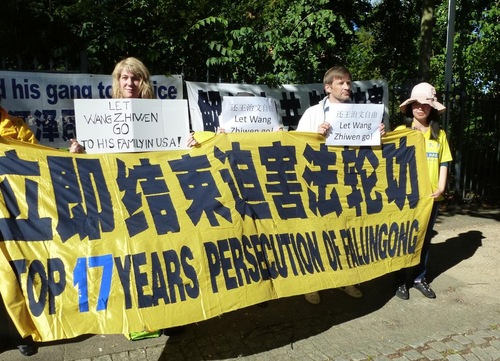