(Minghui.org) Falun Gong practitioners staged an appeal in front of the Chinese Embassy in Bratislava on Thursday, August 11, 2016, calling for Mr. Wang Zhiwen’s freedom. Mr. Wang, a Falun Gong practitioner who has been subjected to severe persecution in China, was recently blocked from traveling to the U.S. to unite with his family.

The rally was covered by national radio and online news outlets.

The practitioners also delivered a letter to the embassy's mailbox, requesting freedom for Wang Zhiwen.

Wang Zhiwen is one of China’s most heavily persecuted political prisoners. In 1999, he was put through a show trial and handed a highly publicized 16-year prison sentence for his role as a volunteer coordinator of a Falun Gong assistance center. Wang is currently under 24-hour surveillance by plainclothes police and a large number of undercover informants.

While Wang was in prison, he was sandwiched between inmates, deprived of sleep, and had toothpicks jammed under his fingernails. In the early years of his imprisonment, Wang lost his teeth from beatings, and both of his collarbones were broken and not properly set. He was forced to do slave labor, wearing shackles weighing over 50 pounds. He suffered a stroke just before his release in 2014.

The family secured a Chinese passport issued in January and a visa from the American consular authorities for Wang, who managed to evade scores of undercover agents and plainclothes officers. Despite these efforts, Wang was stopped by customs officers on August 6, just before gaining entry to Hong Kong.

There, officers snatched his passport and clipped off a corner of the document, invalidating it. They gave no explanation, other than that it had been cancelled.

The appeal in Bratislava was part of international efforts to secure freedom for Wang Zhiwen. 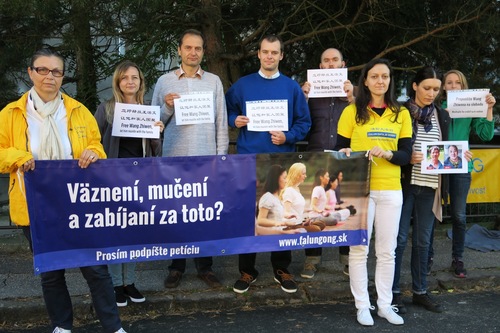 Practitioners hold a banner reading “Persecuted for doing this?” and posters “Free Wang Zhiwen - Let him Reunite with Family” in front of the Chinese embassy in Bratislava, Slovakia 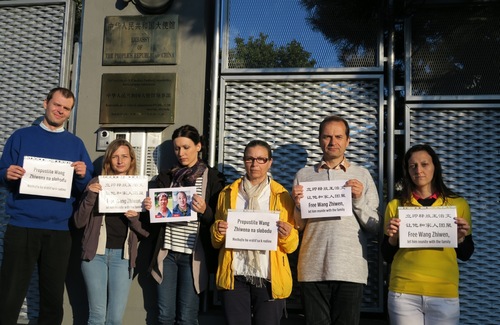 Practitioners stage a peaceful protest in front of the Chinese Embassy in Bratislava, Slovakia. 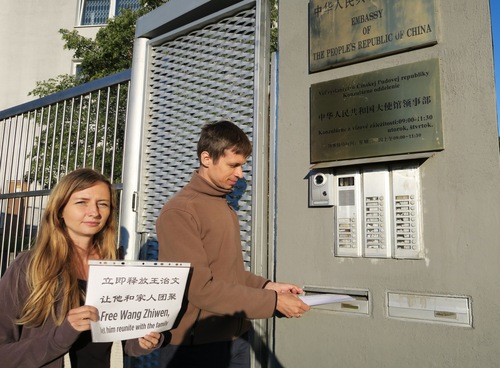 Practitioner delivering a letter “Freedom for Wang Zhiwen” to the Chinese Embassy’s mailbox.

“Informing Spectators of the Rio Olympics About the Persecution in China”