(Minghui.org) Today's news from China includes incidents of persecution that took place in 12 cities or counties in 8 provinces. According to this report, 17 Falun Gong practitioners were subjected to mistreatment during their detention, and at least 18 practitioners were illegally arrested. 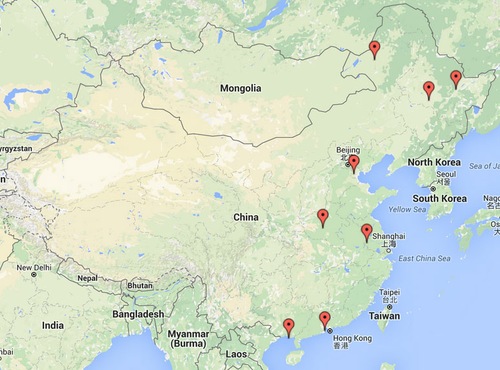 Ms. Wang Sanxiu, an engineer at Nanjing Institute of Geology and Mineral Resources in Qinhuai District, was arrested by officers from the Dongzhan Police Station in Hangzhou City on March 10, 2016. She was taken back to Nanjing City that evening and was detained at Qinhuai Brainwashing Center. Shortly after she was released, she received a notification by mail on June 10, 2016, which stated that she was placed under administrative detention for 10 days.

Over the past decade or so, Ms. Wang has been arrested, detained, and her home ransacked several times for practicing Falun Gong. She was detained in forced labor camps three times and detained in brainwashing centers three times. Ms. Wang also lived under surveillance for a long period of time. The Nanjing City 610 Office attempted to coerce her to be an informant for them, which she refused to do.

Ms. Zhao Liya and Ms. Sun Chunhua were arrested by officers from the Ye County Domestic Security Division on December 24, 2015. Both practitioners were taken to Baofeng Detention Center. No family visits were allowed. It was reported that the Ye County Court had scheduled a trial for the two practitioners at the end of June 2016.

A dozen or so police officers, led by Han Chunlin (head of the Tulihe Town 610 Office) and Sun Xueyan (a local police officer), broke into Ms. Li Yanling's home on the evening of May 26, 2016. They ransacked her home and confiscated Falun Gong informational materials and a printer. Ms. Li was arrested and taken to Yakeshi Detention Center. Family visits were denied.

The same group of officers broke into Ms. Zhang Xiufen's home on the morning of May 27, 2016. They ransacked her home and arrested her. She was released that afternoon.

Mr. Jin Yuan was arrested in November 2010, and his home was ransacked. He was sentenced to eight-and-a-half years in prison by the Xiangzhou District Court in June 2011. He was taken to Yangjiang Prison in September 2011. He remains in prison.

Ms. Liu Aihua was arrested on November 10, 2012 and was detained in the Zhuhai City No. 1 Detention Center. She was tried and sentenced to four years in prison on June 25, 2013. Ms. Liu was transferred in August 2014 to Guangdong Provincial Women's Prison, where she remains in the No. 4 Ward.

Ms. Luo Jun was arrested at home, and her home was ransacked on September 2, 2015. She was detained in the Zhuhai City No. 1 Detention Center. Ms. Luo was tried and sentenced to five years in prison in January 2016. She appealed. The second trial was not open to the public. The court upheld the original judgment. She remains imprisoned in the Zhuhai City No. 1 Detention Center.

Ms. Chen Guangyun was arrested at her store on September 4, 2015, and her home was ransacked. She was held in the Zhuhai City No. 1 Detention Center. In January 2016 Ms. Chen was tried and sentenced to four years in prison. She appealed. The second trial was not open to the public. The court upheld the original judgment. She remains imprisoned in the Zhuhai City No. 1 Detention Center.

Ms. Chen Hong'e, about 40, went missing in February 2016. It was learned later that she has been detained in the Sanshui Brainwashing Center.

Ms. Wu Xiaoju, age 51, was arrested in April 2016 for distributing Falun Gong informational materials. She has been held in the Zhuhai City No. 1 Detention Center.

Ms. Lu Huiling and her daughter, Ms. Chen Jing, were arrested in Jiangxi Province around March 2016. Both were transferred back to Zhuhai City. They are detained in the Zhuhai City No. 1 Detention Center.

Mr. Wan Shuqing, from Tangyuan Farm, was tried and sentenced to prison by the Baoquanling Reclamation Bureau Court in Hegang City on March 22, 2016. He has appealed to the Intermediate Court of the Heilongjiang Land Reclamation Bureau.

Mr. Wan was arrested by officers from the Tangyuan Farm Police Department on July 28, 2015.

Ms. Song Huichan was sentenced to three years in prison by the Tanggu Trial Division of the Binhai District Court (formerly Tanggu District Court) without a court hearing.

Ms. Li Daoqiong was arrested at home by officers from the Haicheng District Police Department on May 6, 2016. She was placed under criminal detention at the No. 1 Detention Center. Ms. Li was released on bail on June 5, 2016 and is living under police surveillance. She has to report to Chen Penghui, an officer from the Gaode Border Police Station, Beihai Border Sub-Division, whenever Chen checks upon her.

Mr. Yue was sentenced to 3.5 years by the Zezhou County Court on March 2 of this year. He appealed the unjust sentence, stating that there is nothing wrong with exercising his constitutional right to freedom of belief, and he should never have been prosecuted for practicing Falun Gong.

Now that the higher court rejected his appeal, Mr. Yue has been transferred to Qi County Prison.

A married couple remains detained following their arrest last November for persisting in exposing the persecution of Falun Gong.

Mr. Xu Xuekun, age 54, and his wife, Ms. Bai Shuhui, age 53, had their home ransacked on November 15 of last year. The police confiscated three computers, three printers, one laminator, one three-hole punch, and some copy paper.

A business woman vows to take her case to the Beijing Superior Court and Procuratorate after the Beijing Second Intermediate Court turned down her appeal.

Ms. Wang Lei was sentenced to 8 years last November for refusing to renounce Falun Gong. In March this year, she was transferred to the Tiantanghe Transfer Center, where she was brutally beaten and forced to go through brainwashing sessions.

Her family is extremely concerned about her well being.

Ms. Ma Yuzhi from Liaocheng was arrested on March 9 this year in Heilongjiang Province while visiting a relative there. She remains imprisoned at the Liaocheng City Detention Center following her transfer back to her hometown.

Ms. Ma was formally arrested and is now facing possible indictment for refusing to renounce her faith in Falun Gong.

Seventeen Falun Gong practitioners were arrested by Qitaihe police officers on April 24 and May 8, 2016. Twelve of them were transferred to the Qitaihe Brainwashing Center, which is disguised as “Qitaihe Welfare Homes for Children.”

It was reported that Ms. Wu, Ms. Wang Jing, and Mr. Li were often beaten in detention.