(Minghui.org) Henan farmer Mr. He Hongliang was recently released from prison on medical parole, bringing an end to his three-year unlawful prison term. This was the third time he had been detained and tortured by the Chinese regime for refusing to renounce his belief in Falun Gong.

The 70-year-old Huaiyang County native was arrested in June 2013 and held for more than 10 months at the county detention center, where he was physically and verbally abused and sexually assaulted.

After Mr. He was transferred to Xinmi Prison in April 2014, his health declined rapidly, despite continuous medical treatments. It is suspected that the medication that he was given caused his condition to worsen.

Mr. He has been targeted by local authorities since the persecution began in 1999. He entrusted his family to file a lawsuit against Jiang Zemin in September 2015 while imprisoned in Xinmi Prison, holding the the former head of the communist regime responsible for launching the persecution.

Mistreated During Arrest and Interrogation

Mr. He was arrested on June 26, 2013 by police officers from the local Domestic Security Division. Three officers slapped him and demanded he not say a word during the arrest.

While interrogated at the police station, he was tied to an “iron chair” for two days. 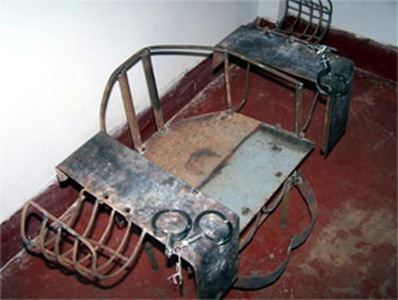 Three officers from the Xuwan Police Station ransacked the home of Mr. He's son two days later without presenting identification or a search warrant. They also ransacked Mr. He's home later that day and confiscated photos of the founder of Falun Gong, a MP3 player, and calendars containing information about Falun Gong.

Mr. He was taken to the Huaiyang Detention Center three days after his arrest. Detention center officials had ordered inmates to physically abuse Falun Gong practitioners.

A prisoner in his cell slapped him upon arrival, just because he practiced Falun Gong.

Before his arrest, he had been in a car accident and was diagnosed with a comminuted fracture in his right leg, which is a break or splinter of the bone into more than two fragments. When the guards and inmates noticed his limp, they pulled his right leg, which caused excruciating pain. As a result, he has not completely recovered from the injury.

The inmates poured water on the cement floor and pushed him to the ground. Each inmate grabbed one of his arms and legs and pulled him back and forth over the slippery ground. They also pulled off his shirt, put soap on his back, and beat his back with shoes. They called the red marks left by the soles “iron stamps.”

Director Li claimed that Mr. He washed his feet with his urine. When Mr. He protested, the guards and inmates slapped him and pulled his pubic hair out.

A guard surnamed Shi mentioned to Mr. He's cellmates that he did not want to see Mr. He with any facial hair, to the inmates pulled his beard out.

They pushed his head into an urinal, used a lighter to burn his eyebrows and beard, and pulled out all of his pubic hair.

A few inmates once pushed Mr. He's head into an urinal while another inmate urinated into his mouth and over his face and head.

On two different occasions, two inmates stripped naked in front of Mr. He and attempted to touch him with their penises.

In Huaiyang Detention Center, inmates abused Mr. He while guards looked the other way.

Inmate Wu often pinched his legs, chests, and nipples until they bled. He also beat him regularly until his hands hurt.

Inmate Zhang covered his head with a quilt and beat him. The inmates often poured water onto his quilt and kept doing so when he hung it up to dry.

Inmate Ma regularly put a vibrating electronic device near his ear in the middle of the night, which deprived him of sleep.

When he was on a hunger strike, the inmates sprayed chili and garlic water onto his face.

Inmate Dou kicked him, pushed him to the ground, and hit his face until it was covered with blood.

Due to the physical violence that he had suffered at the county detention center, Mr. He was in poor health when he was transferred to the Xinmi Prison in April 2014. Three people were assigned to “transform” him, or force him to renounce Falun Gong through physical and psychological abuse.

Inmates stepped on his body on the first day for refusing to wear the prison uniform.

When Mr. He felt sick, the prison doctor prescribed a medication that made his pain worse. When he protested, the authorities forced him continue his treatment.

He was handcuffed and shackled for two weeks for shouting “Falun Dafa is good.” A guard also sprayed a liquid solution into his mouth and punched him.

Although very weak, he was able to walk when he first arrived in the prison in 2014. After some time, he needed assistance when walking. By the time he was released on medical parole, he could no longer walk at all; two people had to carry him out of the prison.