(Minghui.org) On July 20, 2016, Falun Gong practitioners and supporters in Ottawa rallied in front of the Chinese Embassy to Canada, marking 17 years of peaceful resistance to the persecution. They called for Jiang Zemin, the former head of the CCP responsible for the persecution, to be brought to justice.

Falun Gong practitioners and supporters in Ottawa hold a rally in front of the Chinese Embassy to Canada on July 20, 2016.

Three notable guests spoke at the rally: Mr. David Kilgour, former MP and Canadian secretary of state for Asia Pacific and one of the chief independent investigators of organ harvesting atrocities in China; Mr. Jack Maclaren, member of the Legislative Assembly of Ontario; and Mr. Majed El Shafie, president and founder of One Free World International. 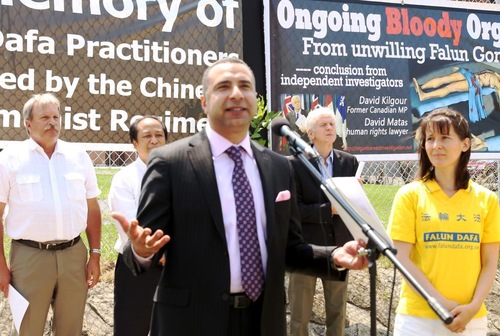 Mr. Majed El Shafie, president and founder of One Free World International gives an impromptu speech at the rally.

An employee of the Chinese Embassy climbed onto the roof of the building and took pictures of those assembled during the rally. He left immediately when he saw practitioners taking pictures of him.

Mr. Shafie commented during his speech, “Behind your blinded windows, you can take our pictures, behind your blinded walls you can take our pictures, and you can send it to Beijing. But I can tell you for a fact we’re not scared. None of us is hiding his face. None of us is hiding behind a tree. We are here, and we will be here until the end, because it doesn’t matter how much weapons you have, it doesn’t matter how much army you have, we have our free will. Freedom is bulletproof.”

“You can kill us, you can harvest organs from us, but our hearts will keep beating with the truth. You can kill our bodies, but you cannot touch our souls...

“I will fight for the Falun Gong belief until the last day of my life, because if we stop fighting for each other, we lose our humanity... We have to know that the almighty power is not more powerful than our values and our belief in human rights.” 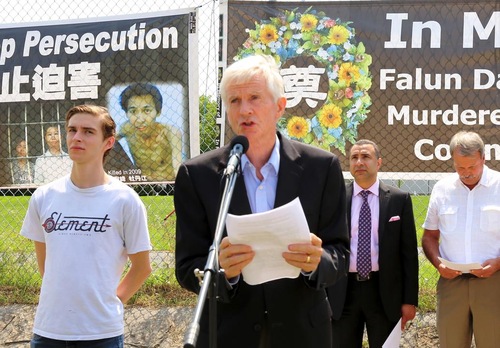 Mr. Kilgour stated the findings of the organ harvesting research, and stressed the criminals must be brought to justice. He said, “The update on our books, The Slaughter (2014) and Bloody Harvest (2009), released on June 22 in Washington, DC, provides a meticulous examination of the transplant programs of hundreds of hospitals in China, drawing on media reports, medical journals, hospital websites and a vast amount of deleted websites found in archives. It analyzes hospital revenue, bed counts and utilization rates, surgical personnel, training programs, state funding and other factors.

“Our update concludes that China is performing 60,000 to 90,000 transplants per year as opposed to the 10,000 per year the Chinese government claims.

“We provide considerable evidence of an industrial-scale, state-directed organ transplantation system, controlled through national policies and funding, and implicating both the military and civilian healthcare systems...

“The source for most of the massive volume of organs for transplants is the killing of innocents: Uyghurs, Tibetans, House Christians and primarily Falun Gong. Organ pillaging in China is a crime in which the Communist Party, State institutions, the health system, hospitals and the transplant profession are all complicit...

“This ongoing crime against humanity must cease and those involved must be brought to justice in China or, presumably at some point to the International Criminal Court.”

Mr. Kilgour called for Prime Minister Trudeau and his government to “use every opportunity to urge the party-state in China to end forced organ pillaging/trafficking now. It should help bring Jiang Zemin, who initiated and orchestrated the persecution, to justice.”

“No Worse Human Rights Abuse Than China against the Falun Gong.” 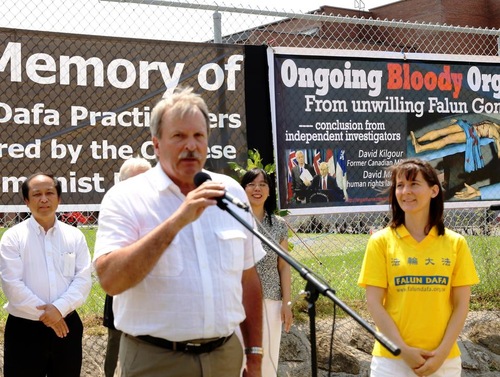 Mr. Maclaren spoke out against the persecution, saying, “I don’t think anywhere we have seen worse human rights abuse than China against the Falun Gong...

“The peaceful principles of Truth, Compassion and Tolerance, these three wonderful principles, in any land in any society, would be the foundation of strong communities and strong countries and good people.

“Having the strength character to stand by your principles of Truth, Compassion, and Tolerance strikes fear in the heart of the communist government, because there is nothing so fearful to a tyrant, to a dictator than a free man or a free woman which you are.

“Freedom everywhere has usually come at a cost and a price, and you have suffered greatly since 1999. Seventeen years ago today, the persecution began in China, resulting in imprisonment, deaths or murders, and the heinous crime of organ harvesting with the benefit of financial gain for a corrupt government and corrupt politicians. It must stop, it must in Canada we will support you completely.

“The recent report by David Kilgour and David Matas has established that the magnitude is beyond most of our wildest dreams. Until now, up to a million Chinese people have died at the hands of the Chinese government for having the courage to have principles and believe in Truth, Compassion and Tolerance.

“It is a wonderful privilege and honor to be with you here again today, and I will be proud to be with you in the future anytime you call. We must win! We will win! And you are very strong!”

“Held for Questioning, I Talk to Police Face to Face About the Persecution”