Delhi, India: The Times of India Reports on Falun Dafa

(Minghui.org) The Times of India newspaper (the third largest in India) published a report on July 18, 2016, entitled “Falun Dafa: An attempt to cultivate good, eliminate bad.”

“If you observe closely, you might find them in public parks, schools or houses, exercising in slow rhythmic movements to the sound of music, or practicing meditation,” begins the article.

“Falun Dafa, or Falun Gong, a spiritual philosophy with its roots in the 90s in China, has a sizable presence in India, with over 25 places of practice in Nagpur city alone, besides its presence in over 114 other countries.” 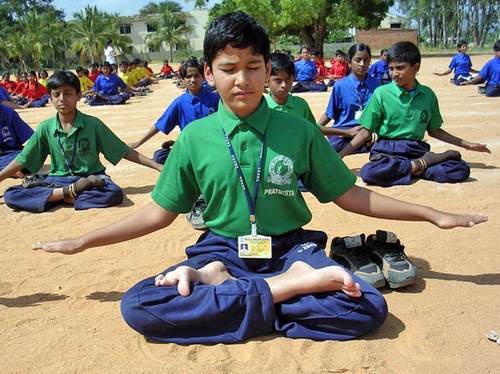 Indian students do Falun Gong exercises in a group.

“The USA, European Union and several other countries have condemned the Chinese order [to persecute Falun Dafa],” noted the article, after explaining how the practice came under attack by the communist regime in 1999 when the number of practitioners reached 70 million.

“Truth, compassion and tolerance are the three tenets of this philosophy,” stated the article and that the practice was introduced in 1992 by Li Hongzhi in China. “Li Hongzhi has been nominated for the Nobel peace prize three times. [Falun Dafa] was introduced in India in 2000, starting from New Delhi.”

Marc Luburic, a native of Australia, who runs a talent management agency in Mumbai, has been practicing Falun Dafa for four years. “'The practice isn't so much about the exercises, but as a means of cultivating your mind and heart,' he says. Luburic recalls popping pills, getting injections and drinking in moments of stress before being introduced to the philosophy. He says, within a week of following the exercises, his body no longer craved for alcohol or other substances. Good health and curing of illnesses is a by-product of the practice, he said.

The article also quotes the president of the Falun Dafa Association in India, Suren Rao, a freelance creative writer based in Kolkata, who said, “'Looking within is the focus of the practice. Instead of pointing fingers, we need an understanding that the problem originates from us, and can be solved by us.'”