(Minghui.org) On Sunday July 17, more than 1,000 Falun Gong practitioners held a series of activities in Hong Kong centered around ending the persecution of Falun Gong in China. The day's events made a big impact on the public, including a number of visitors from mainland China who had never before had the opportunity to see Falun Gong freely practiced.

Seventeen years ago, on July 20, 1999, the Chinese Communist Party (CCP) under then party head Jiang Zemin launched the brutal persecution of Falun Gong, a spiritual discipline based on the principle of Truthfulness-Compassion-Forbearance. Since then, thousands of practitioners have lost their lives to torture and abuse, millions have been imprisoned, and the entire nation lost the freedom of belief. Seventeen years later, the brutality is still going on.

Sunday's activities in Hong Kong included a peaceful protest, a call to end the communist regime's forced organ harvesting of prisoners of conscience, and a call to bring chief perpetrator Jiang to justice.

In the morning, practitioners demonstrated the exercises at Edinburgh Place, followed by a rally at King's Road Playground. The theme of the rally was “Bringing the murderers to justice” – calling for the perpetrators of the persecution to stand trial for their crimes.

A grand march kicked off at 2 p.m., traveling through Hong Kong's busiest ares, including Causeway Bay, Wan Chai, and Central, and ending at the Liaison Office of the Central People's Government in Hong Kong. 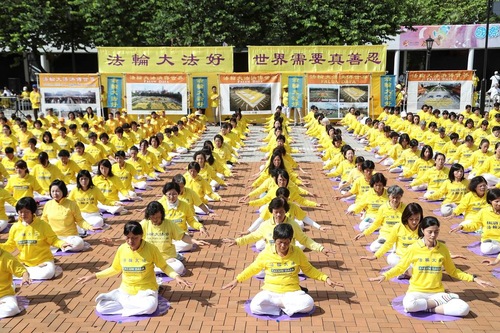 Doing the Falun Gong exercises as a group 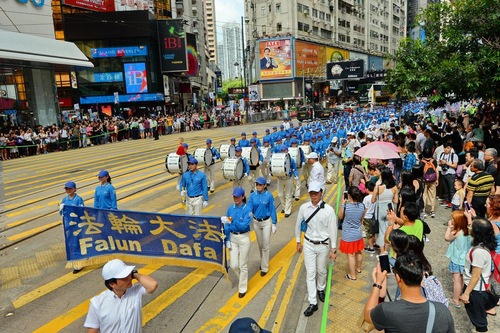 The march was comprised of six sections, each with a special theme: “What Falun Gong is really about,” “Peaceful resistance,” “Encouraging the positive energy in Hong Kong,” “Heaven eliminates the CCP,” “Bring the murderers to justice and end the persecution,” and “Falun Dafa is good.”

In addition, stirring performances by the Divine Land Marching Band, a beautifully decorated float, a drum and flag team, a lively group of waist drummers, and Falun Gong exercise demonstrations attracted the attention of tourists and local citizens. 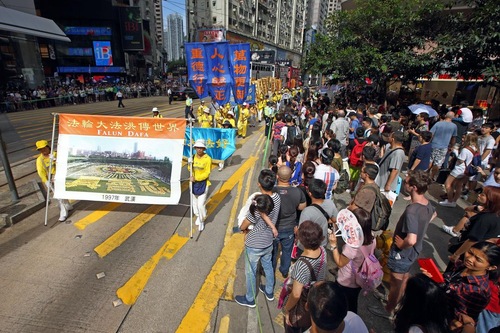 The large banner reads: “Falun Gong has spread to the whole world.” 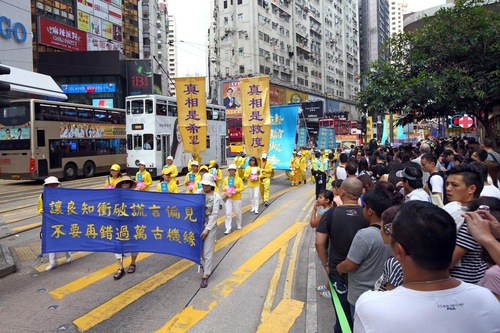 The large banner reads: “Do not be deceived by the propaganda.” 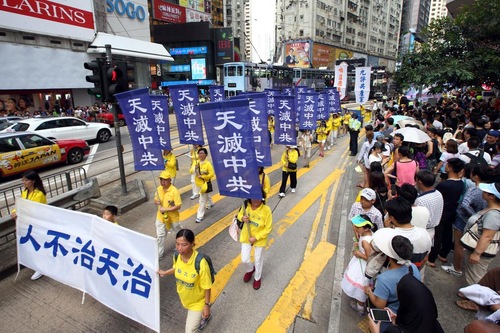 The banners read “Heaven will eliminate the CCP.” 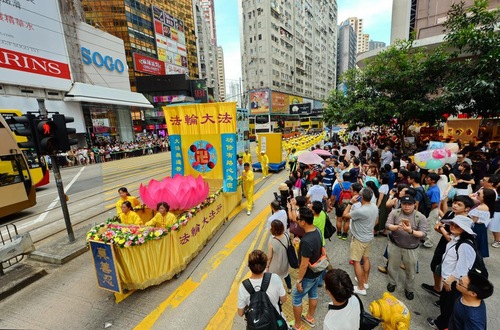 The banner on the float reads “Falun Dafa.”

Many tourists from mainland China were amazed that Falun Gong practitioners can freely practice their belief and distribute informational materials in Hong Kong.

Mr. Zhao from Guangdong said, “It is truly remarkable. Falun Gong has so many people, yet is so peaceful. I am very impressed. What amazed me is that in Hong Kong the policemen protect Falun Gong and even led their march! This is a free society. My girlfriend just said to me that she likes the freedom here. We don't have it in China.”

Mr. Chen, 20, was surprised to see the Falun Gong march on his first trip to Hong Kong.

“All we have heard in China is the propaganda and slander against Falun Gong,” he said. “These kinds of activities are banned in China. I am very surprised to see it in Hong Kong. I want to know what is true and what is false.”

Mr. Chen was also surprised to learn that Falun Gong has spread to more than 100 countries, and in Taiwan alone, there are several hundreds of thousands practitioners.

“I will read more about Falun Gong,” he said. “I wish one day Chinese people will enjoy the same freedom.” 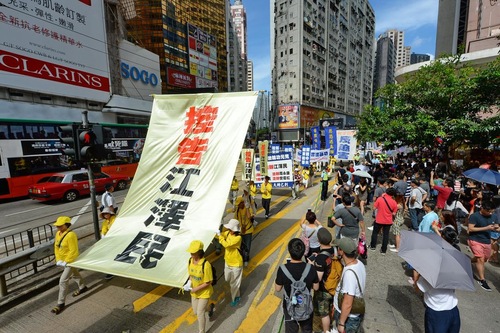 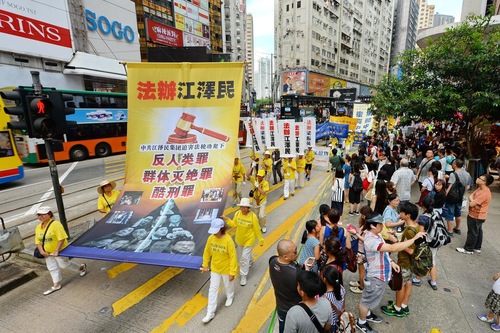 The large banner says: “Bring Jiang Zemin to justice for crimes against humanity, genocide, and torture.” 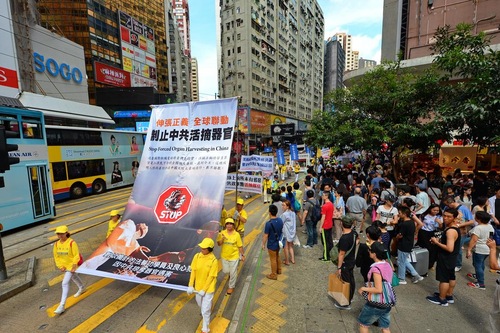 Many local citizens and tourists were shocked to learn about the state-sanctioned forced organ harvesting from living prisoners of conscience, most of whom are Falun Gong practitioners. Once they were shown the evidence, many people signed the petition calling for an end to the crime and for bringing Jiang Zemin to justice.

“If everybody follows the principle of Truthfulness-Compassion-Forbearance the world will be a better place,” he added.