Chinese Tourist: “The Chinese Ought to Thank Falun Gong Practitioners”

Falun Gong practitioners held the activity on Aotea Square on June 26, 2016, appealing to the public to help end the 17-year-long persecution of Falun Gong in China. 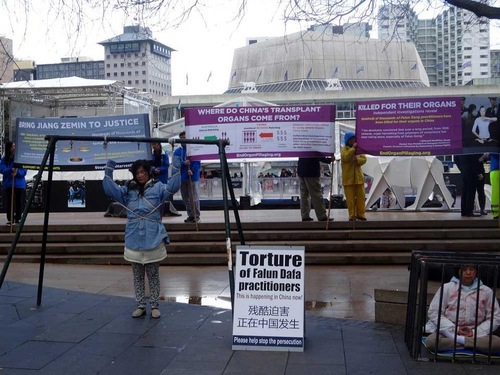 Reenacting “Hanging” and “Locked in a cage” 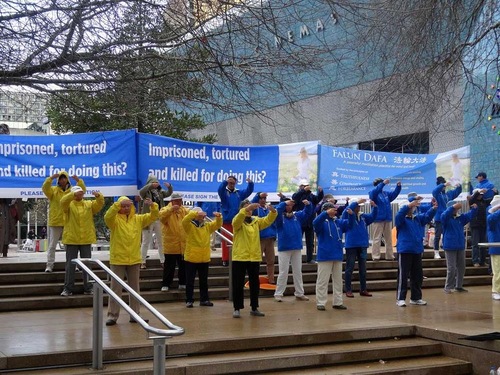 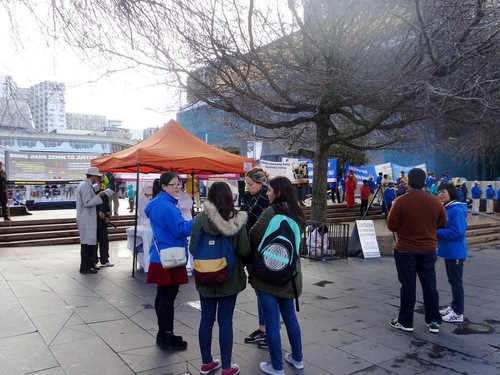 The “anti-torture demonstration” was made up of two distinct parts. One part featured the reenactment of two forms of torture: “Hanging” and “Locked in a cage.” The other reenactment was of an operating room where a living Falun Gong practitioner's vital organs were being removed to sell to a transplant hospital.

Banners behind the reenactments read: “Falun Dafa,” “Falun Gong Practitioners' Organs Taken by Force,” “Bring Jiang Zemin to Justice,” and “What Is the Source of China's Transplants?”

More than 20 practitioners demonstrated the exercises in the wintry drizzle.

Mr. Cao, a Chinese tourist, told a practitioner that Aukland was his last stop before returning home. “The Chinese ought to thank Falun Gong practitioners,” he said.

He explained that, without Falun Gong practitioners’ hard work in exposing the Chinese Communist Party's atrocities, even more people would fall victim to its deceptions.

“One of Falun Gong’s principles is 'Compassion.' I believe 'Compassion' will prevail. More and more Chinese understand it now,” he commented.

Yan and Hu, two Chinese students, observed the reenactments closely. Hu said he had quit the Youth League and Young Pioneers after he learned the truth about the persecution some time ago in Hong Kong.

Yan said he had watched a VCD about Falun Gong when he was still in elementary school. The video proved that the “Tiananmen Self-immolation” was staged.

“CCTV reporters interviewed those who had been severely burned without putting on a mask or sterile gowns. It had to be a set-up,” he said.

He was very upset about the persecution after a relative was arrested and persecuted for practicing Falun Gong: “The whole world knows about the live organ harvesting crime now. Jiang Zemin is already dead!”

Mr. Arjrn is a computer programmer. He said one of his colleagues used to work for Chinese Central TV station (CCTV) and told him that the station cooked up a lot of fake news to serve the purposes of the ruling Communist Party.

“If they can torture Falun Gong practitioners, they can certainly torture other Chinese people. So if more Chinese learn the truth and begin to say ‘No’ to the Party, the Party will collapse,” Mr. Arjrn commented after he signed a petition calling for an immediate end to forced organ harvesting.

Mr. Terence and Mrs. Vonney, a couple who live in central Aukland, had heard about the persecution of Falun Gong and signed a petition supporting it many years ago. They also had practiced the Falun Gong exercises for a while. “I think we should pick up the exercises again. That was a very good experience,” Mrs. Vonney said to her husband.

Ms. Inguid is a reporter who follows Tibetan Buddhism. She understood the principles of Truthfulness-Compassion-Forbearance very well.

“I need time to digest these shocking facts [about organ harvesting],” she said. “I am thinking about what else can be done besides a signature drive and fliers to stop this persecution.”

More than 300 signatures were collected during the 3-hour event, and over 60 Chinese people announced their withdrawal from the CCP and its affiliated organizations.

“My Experience Cultivating and Elevating with an Octogenarian”