(Minghui.org) Practitioners from the city of Jinzhou in Liaoning Province have been informing people about the persecution of Falun Dafa and encouraging them to withdraw from the Chinese Communist Party (CCP) and its affiliated organizations.

They’ve also collected signatures from people who support the lawsuits being filed against Jiang Zemin, the former head of the CCP, who initiated the persecution.

Initially 1,162 people signed the petition. By June 2016, an additional 2,028 people expressed their support for the 200,000 practitioners and family members who have filed lawsuits.

Some people had already withdrawn from the CCP before they signed the petition, while others did both simultaneously. 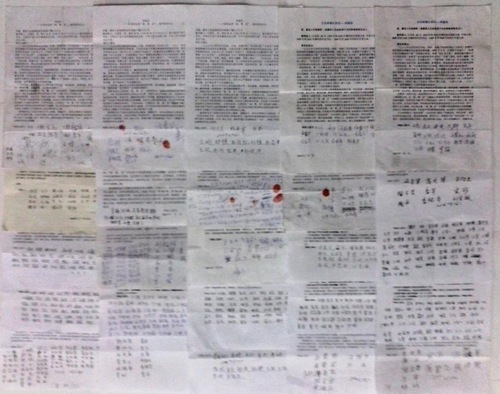 Signatures of supporters of the lawsuit

In their petition letter, practitioners said: “Jiang Zemin launched the persecution of Falun Dafa, fabricated lies to slander the practice, staged the ‘Tiananmen Self-immolation' and ordered the forced organ harvesting of living practitioners. What Jiang did was inhumane, the most evil thing on earth!”

Practitioners told people that they have been conducting themselves according to the principles of Truthfulness-Compassion-Forbearance and holding firmly to their belief. Even though they have committed no crimes, the CCP continues to ransack their homes, arrest them, send them to prison and forced labor camps, and fire them from their jobs.

When people understood the severity of the persecution, they signed the petition using their real names, pseudonyms, or thumbprints.

Farmer Meng Gui said, “I know that Jiang Zemin is rotten to the core. Harvesting organs from practitioners for profit is his biggest crime. I'm signing with my real name.”

Liu Ping commented, “Falun Dafa is truly good! I support the lawsuits against Jiang! He should not have ordered the harvesting of organs from practitioners!”

One fruit vendor exclaimed, “There is nothing good about the CCP. It is so corrupt!”

A snack vendor said, “I often say, 'Falun Dafa is good' and my business has been good. Jiang is the bad guy. Count me in!”

A group of students read the display board about the lawsuits against Jiang Zemin and commented, “Jiang Zemin is terrible! We should sue him! Let's sign in support of the lawsuits!” More than 40 of them signed the petition and some also quit the Communist Party's Young Pioneers.

The petition letters have been submitted to the Supreme People's Procuratorate.