San Francisco: Rally and March Held to Oppose the Persecution and Call for Bringing Former Chinese Dictator to Justice

(Minghui.org) Falun Gong (also known as Falun Dafa) practitioners held a rally and march in downtown San Francisco, California on July 16, 2016, calling for an end to the persecution, and bringing the former Chinese dictator Jiang Zemin to justice.

Falun Gong practitioners first conducted group exercise practice in front of San Francisco City Hall. Their peaceful exercises caught the attention of many residents and tourists, who paused to take photos. Some people learned the exercises on the spot. 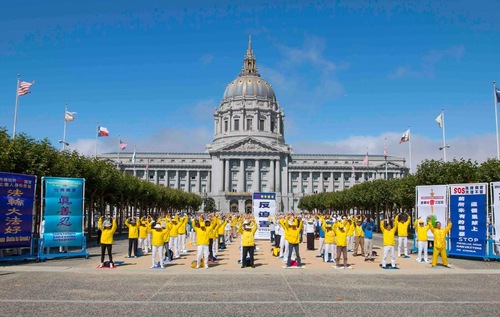 Falun Gong practitioners practice the exercises in front of San Francisco City Hall before the march. 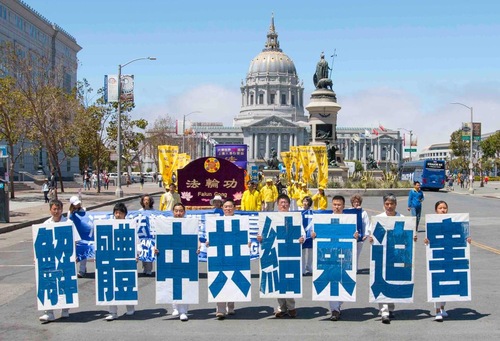 The large Chinese characters read, “Disintegrating the the Chinese Communist Party (CCP) and Stopping the Persecution.” 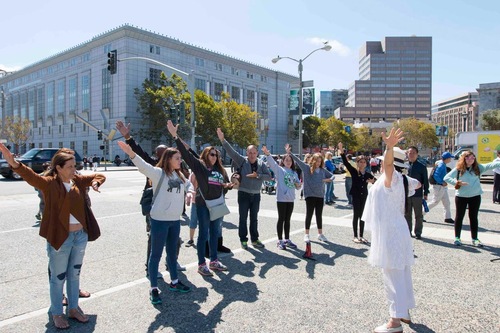 The march started at City Hall at noon, passed through downtown and Chinatown, ending at Portsmouth Square in Chinatown. A rally followed on the square. 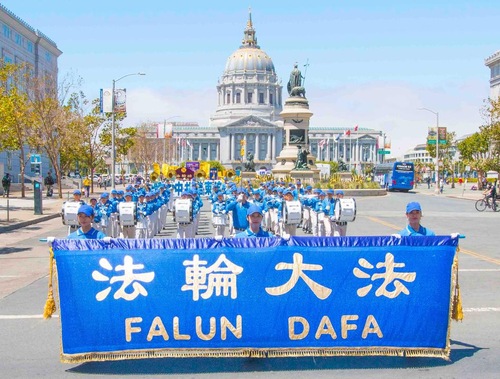 The march led by the Divine Land Marching Band started at City Hall. 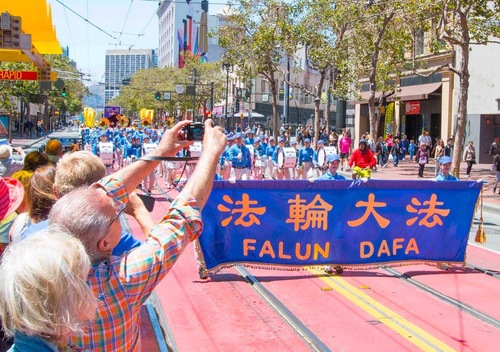 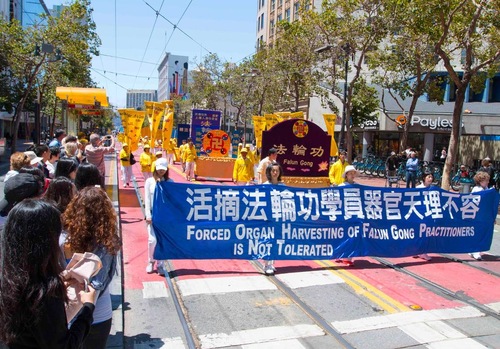 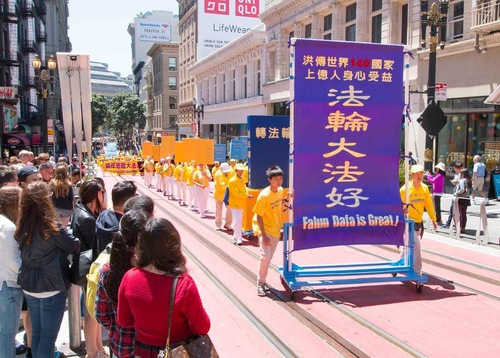 Falun Gong march procession. A group of practitioners behind the large banner hold a model of the book Zhuan Falun, the main book of Falun Gong. 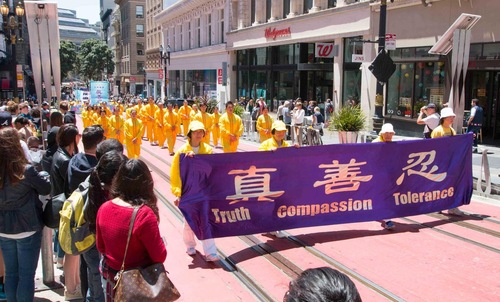 Practitioners demonstrated the exercises during the march in downtown San Francisco. 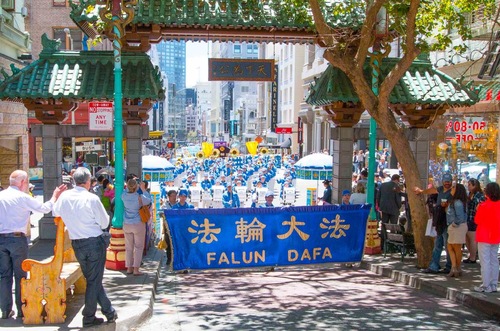 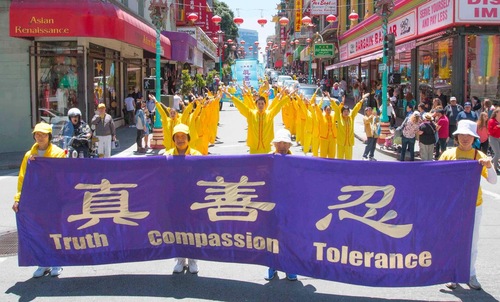 Practitioners demonstrate the exercises during the march through Chinatown. 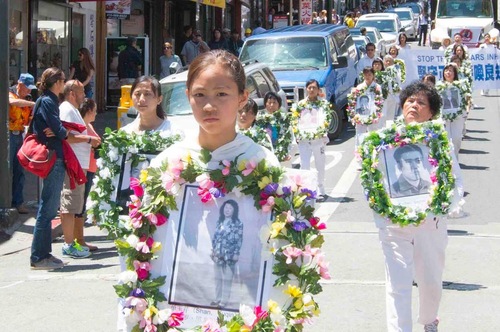 Practitioners hold portraits of fellow practitioners who were tortured to death by the CCP. 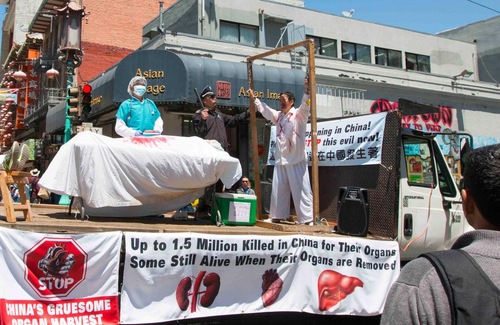 The march consisted of four processions. The first procession was “Falun Dafa Is Great,” comprised of the Divine Land Marching Band and the exercise-demonstration team.

The second procession was “Stop the Persecution of Falun Gong,” which included practitioners holding portraits of fellow practitioners who were tortured to death by the CCP, photos showing the brutal persecution and reenactment of the CCP's torture.

The third procession was “Global Lawsuit Against Jiang Zemin,” composed of practitioners holding posters with information about Jiang's crimes.

The final procession was about the Nine Commentaries on the Communist Party and promoting withdrawals from the CCP. Practitioners in the final procession held large banners and posters advising Chinese people to quit their memberships in the CCP and its affiliated organizations. 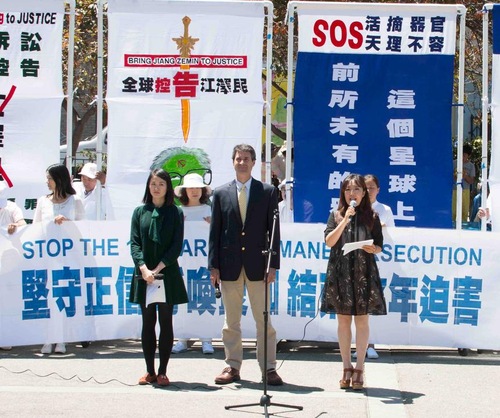 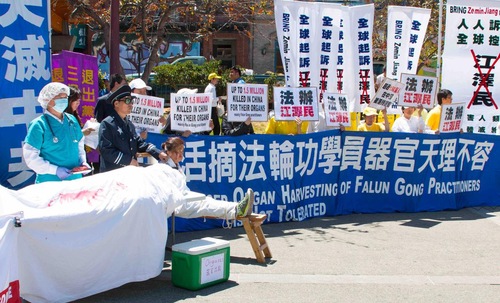 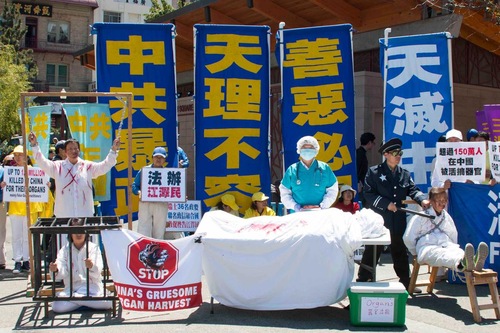 Reenactment of the CCP's live organ harvesting and torture during the rally. 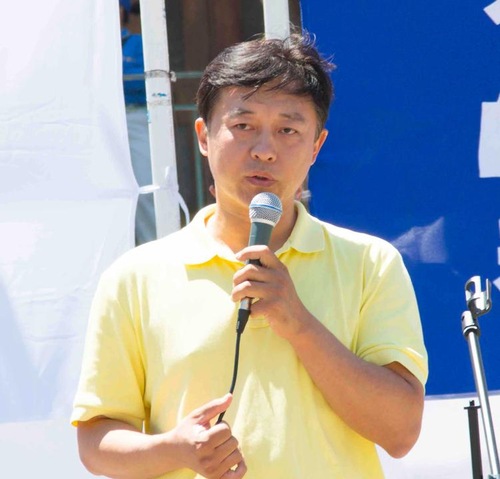 Practitioner Bu Dongwei from Beijing was incarcerated and tortured twice in forced labor camps for practicing Falun Gong. During his second incarceration, his blood was drawn every three months, which he was told was for a “health check.” But to his surprise, blood was not drawn from non-practitioners who were also incarcerated. He later learned that the reason for the blood draws was preparation for live organ harvesting. He learned this after coming to the U.S. in late 2008 and reading the investigation report by David Matas, human rights lawyer, and David Kilgour, the former Canadian Secretary of State for Asian Pacific. He also listened to many phone records for the investigation.

He said, “I recall that blood was drawn every three months in the labor camps. The only reasonable explanation is that the blood was taken for maintaining a live organ donor database.” 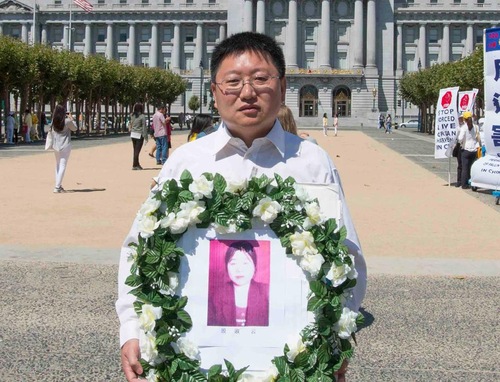 Practitioner Gao Rui held a portrait of a fellow practitioner, whom he knew personally. She was Yin Shuyun, a practitioner at the same group study site in Changchun, Jilin Province, China. He said, “I hold her portrait in the march and hope more people know about the CCP's 17-year-long persecution. The CCP even conducts live organ harvesting. Such inhumane crimes must stop as soon as possible.”

He continued, “Shuyun was a very kind lady. Falun Gong practitioners strive to be good people. But the CCP uses the state machine to persecute them. The main perpetrator, Jiang Zemin, must be brought to justice.” 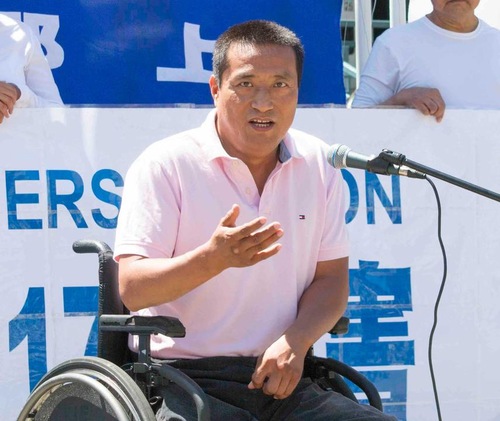 Fang Zheng was hit by a tank on Tiananmen Square, causing his two legs to be crushed, on June 4, 1989, when the CCP dispatched the army to stop the peaceful demonstration of students. This led to the deaths of hundreds of innocent students and residents.

He said, “The CCP initiated the brutal persecution on July 20, 1999. Today we come here to express our support to Falun Gong. We now know that the Party conducts live organ harvesting. The U.S. House of Representatives passed H. Res 343 to urge the CCP regime to stop live organ harvesting. It is significant.”

He continued, “People know about the CCP's evilness in China, as it has committed many crimes since it took power. But many people don't know some of its crimes. For example, some people still ask me, 'Were your legs truly crushed by the CCP's army tank?'

“It was hard for me to believe when I initially heard of the live organ harvesting, because it violates basic human morality. Any normal person with a conscience would not imagine that the Party would commit such crimes, which are beyond basic human morality. But in reality, the CCP regime is a brutal dictatorship, and does many evil things.”

Senior Reporter: Keep Protesting the Persecution Until the CCP Disintegrates 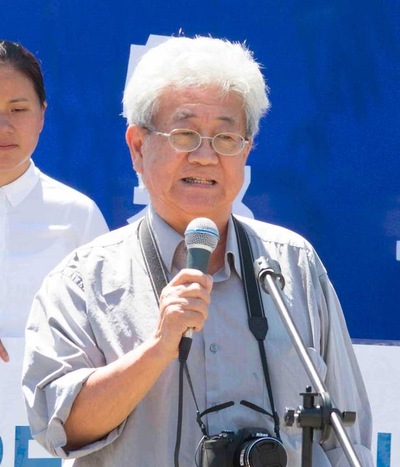 Mr. Cheng Kai, former reporter for main newspapers in China, and reporter for Radio Free Asia (RFA), said, “I have covered Falun Gong since the persecution began. I have not skipped any major Falun Gong event during the past 17 years. My reports on Falun Gong during these years are the most memorable, cherished, and proud experiences during my reporting career. 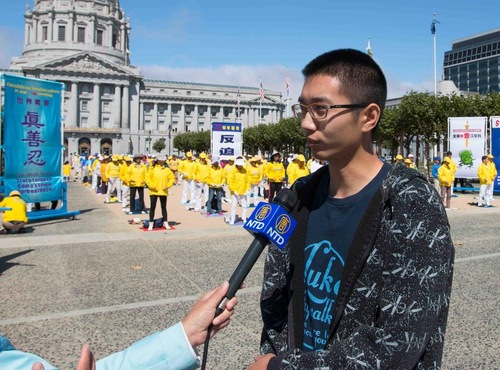 Mr. Fu from China came to the U.S. last year.

Chinese tourists Ms. Chen and her husband, who had come to tour San Francisco, saw many practitioners in front of the city hall. Ms. Chen said emotionally, “I never imagined that so many people practiced Falun Gong here.”

Mr. Fu came to the U.S. from China last year. He did not believe the persecution when he was in China, due to the Party's misleading propaganda. He changed his view after coming to this country and reading more information which is blocked in China. He said, “Now I believe that the persecution is true. The CCP conducts live organ harvesting. Facing the brutal persecution, the practitioners keep practicing their belief. I believe that Master Li is an outstanding and great man.”