Over 1,400 Citizens in Anshan, Liaoning Province Call for Indictment of Former Chinese Dictator

(Minghui.org) Despite the severe political suppression in China, 1,421 citizens in Anshan City, Liaoning Province have signed a petition calling for the prosecution of former Chinese Communist Party head Jiang Zemin. The petition was sent to the Supreme Procuratorate. The signers believe that since Jiang is responsible for launching and directing the 17-year persecution of Falun Gong in China, he should be brought to justice.

The petition is a strong show of support for the 1,200 Falun Gong practitioners in Anshan City, who, along with 200,000 practitioners from across the country, have filed criminal complaints against Jiang. 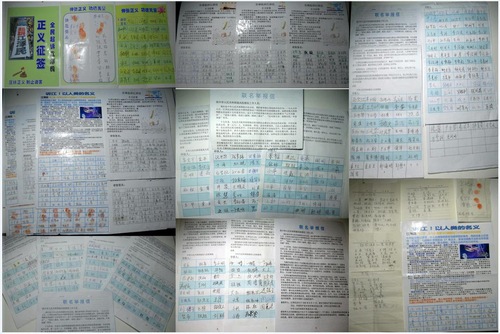 The signed petition, calling for former dictator Jiang Zemin to be brought to justice

Many signers also left messages attached to the petition. Written by Falun Gong practitioners, relatives, and friends, they speak of the great injustice done to such a large segment of Chinese society.

I Witnessed Dramatic Changes in My Mother

My mother heard about Falun Gong and started practicing when she was in a labor camp. As her son, I witnessed the dramatic changes in her.

She had a short temper and often fought with others. She used to smoke and drink. After my father was laid off by his workplace, we had financial trouble. My mother often stole money. That is why she was arrested and sent to a labor camp.

In the labor camp, she met a group of Falun Gong practitioners who were illegally imprisoned. She learned what Falun Gong really is, and decided to practice it. After being released, she started reading Falun Gong books and doing the exercises. Her health and temper improved, and she quit all her bad habits. Seeing the dramatic changes, I and my father both support her practicing Falun Gong.

From my mother, I learned that Falun Gong is only beneficial to society and it does no harm. Why do Jiang Zemin and the communist party persecute such a group of good people? I must stand up to speak out for Falun Gong. Jiang Zemin must be brought to justice!

I went bankrupt and got divorced 20 years ago because of an addiction to drugs. Drugs also destroyed my health, and I was not able to stand up without help.

In 2005, a neighbor of mine introduced Falun Gong to me. I followed the principles of Truthfulness-Compassion-Forbearance and practiced the exercises. I was then able to easily quit drugs, and my health recovered. I found a job, and treated everyone well throughout my daily life. Falun Gong has renewed me, and Jiang launched the persecution.

The Voice of a Child

Mr. Zhang, a good friend of my father's, practices Falun Gong. In 1999, Mr. Zhang went to Beijing to appeal for Falun Gong. But he was arrested and sentenced to two years in a labor camp, where he was severely tortured, physically and mentally. Due to the tortures, he became mentally unwell. After returning home from the labor camp, his wife left him and his workplace sent him to a mental hospital. There he did not get treatment, but was tortured, and got even sicker.

Now, he lives by himself, and nobody dares to approach him. I have deep sympathy for Mr. Zhang. His sadness is all caused by the persecution launched by Jiang Zemin.

I call for the end of the persecution and the restoration of Falun Gong's reputation.