This is a story of findings from Edmund Morel, a shipping line clerk, prior to World War I. “Edmund Morel came to the conclusion that King Leopold was engaged in slavery in the Congo from looking at shipments of goods between the Congo and Belgium.” More specifically, the goods sent to the Congo were guns, ammunition and explosives.

Despite repeated denials from King Leopold of Belgium, Morel's finding was later confirmed by an independent investigator, Roger Casement, the British consul in the Congo. As more evidence surfaced, the slavery in the Congo finally came to light.

Similar things have happened with forced organ harvesting in China, said Matas, “Today there is as much of a discrepancy between the volume of transplants in China and sources of organs than the Government of China is prepared to admit.”

Together with David Kilgour, former Canadian Secretary of State for Asia-Pacific, and Ethan Gutmann, an award-winning China analyst and investigative journalist, Matas published an update to their earlier research work on forced organ harvesting in China. 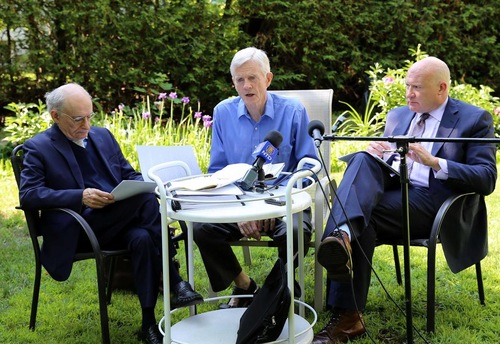 Kilgour and Matas published Bloody Harvest: Organ Harvesting of Falun Gong Practitioners in China in 2009 to shine a light on the harvesting of organs from living Falun Gong practitioners in China, millions of whom have been detained or imprisoned for their belief. Gutmann published The Slaughter: Mass Killings, Organ Harvesting, and China's Secret Solution to Its Dissident Problem in 2014 with additional evidence from his independent investigation.

Based on minimum capacity requirements stipulated by the Chinese Ministry of Health, the 146 hospitals permitted to conduct kidney and liver transplants could have conducted at least one million transplant surgeries since 2000. In reality, all of these institutions are operating well above the minimum capacity. “And that yields a back-of-the-envelope answer: not 10,000, but 50-60,000 transplants per year,” Mr. Gutmann added.

In fact, the investigators found that the organ transplants in China occurred based on demand, with a sufficient supply despite there being no effective organ donation system.

“When we look at hospitals and doctors one by one, a number of features jump out. One is the sheer volume of transplants,“ Matas said in the press conference, “Once we started looking at what is generating the volume, we had to look at the extent to which the Chinese Communist Party (CCP) is in the driver's seat, the structure the regime has built around organ harvesting, and the culpability of some individual Party members. The update accordingly addresses that topic as well.”

Among those who were killed by forced organ harvesting, the majority are innocent Falun Gong practitioners who follow a spiritually-based set of exercises.

Gutmann agreed it is the Party that instigated the systematic organ harvesting. When investigators contacted Chinese hospitals about these actions, they were often told the decision was from higher officials. Some officials asked to discuss such issues using the secret phone line (dedicated to high-ranking Communist Party officials).

A Crime Against Humanity

Gutmann said the atrocity is not only an issue related to Falun Gong. Rather, it is a genocide that is occurring in contemporary society.

Many things need to be done to end the brutality. “Canadian legislation should make organ transplant abuse and brokerage extraterritorial crimes. The legislation should require compulsory medical and hospital reporting of all out-of-country transplantation. That sort of reporting is necessary to make a law against complicity in foreign transplant abuse workable. Insurers should be prevented from covering and paying for abusive transplantation abroad. Pharmaceutical companies should not be allowed to participate in drug trials with patients using organs from improper sources,” Matas explained.

Kilgour said Israel and Taiwan are today’s beacons for rule of law countries whose elected leaders now have the political will to ban transplant tourism at their national and/or state levels. He hopes other countries will take similar actions.

“Frankfurt, Germany: Falun Dafa Group Inspires and Informs at the Parade of Cultures”