(Minghui.org) Today's news from China includes incidents of persecution that took place in 6 cities or counties in 6 provinces. According to this report, 13 Falun Gong practitioners were subjected to mistreatment during their detention, and at least 2 were illegally arrested. Several practitioners seeking to mail letters of complaint regarding Jiang Zemin to the Supreme People's Procuratorate and the Supreme Court have met with obstacles. 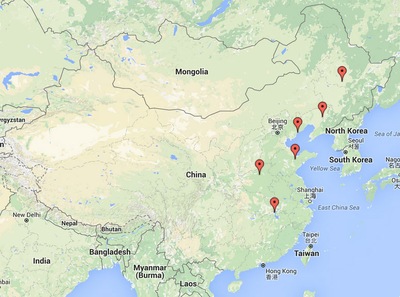 57 practitioners were arrested while taking a group picture in Bailianhu Park in Yongxiu County on April 21, 2016. Eight practitioners are still detained. Some are deprived of family visits.

Ms. Ge Ling, a pharmacist, was taken to Jiujiang City, She was previously sentenced to forced labor terms twice and a prison term once. Mr. Wei, in his 30s, is detained. Ms. Bao Chengyu, disabled, is also detained.

Ms. Jin Guirong was arrested by officers from the Hongqi Police Station on June 2, 2016, when she went to Nangang District Detention Center to see practitioner Mr. Han Wei. She was arrested for handing out informational materials about the persecution of Falun Gong. She is detained at Yaziquan Detention Center.

Ms. Pan Guirong, Ms. Wu Xilan, and Ms. Wen Zhimin were harassed at home by He Liang from Beigang Town. He Liang tried to force them to write guarantee statements to renounce Falun Gong.

Ms. Gao Fengjun was arrested and taken to the Yinbin Road Police Station on June 9, 2016. She was released the next day.

Ms. Gao Meixiang was arrested by officers from the Dayu Police Station on May 3, 2016, for talking to people about the persecution of Falun Gong. She was released that evening.

“Frankfurt, Germany: Falun Dafa Group Inspires and Informs at the Parade of Cultures”