(Minghui.org) “I grew up in China witnessing my mother arrested time and again for refusing to renounce her faith in Falun Gong. The local police constantly came to ransack our home and harass us. My father was so terrified that he fell ill and later died. I was only 15 at the time.

“That was not the end of the terror. I was once dragged out of my classroom and shoved into a police van. I managed to flee to the U.S., only to learn that my mother was arrested again this May.”

The above is a personal account from Ms. Zhang Hongru’s daughter, who is calling for her immediate release from a detention center in Shandong. 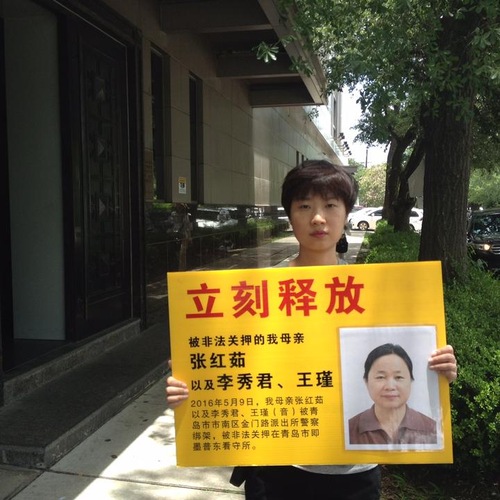 Ms. Zhang’s daughter holds a sign reading, “Immediately release my mother Zhang Hongru, who was arrested along with Li Xiujun and Wang Jin on May 9, 2016. They are now held at Jimo Pudong Detention Center.”

“Forbearance When Encountering Conflicts Spreads in All Directions”