(Minghui.org) Today's news from China includes incidents of persecution that took place in 12 cities or counties in 9 provinces. According to this report, 6 Falun Gong practitioners were subjected to mistreatment during their detention, and at least 15 practitioners were illegally arrested. 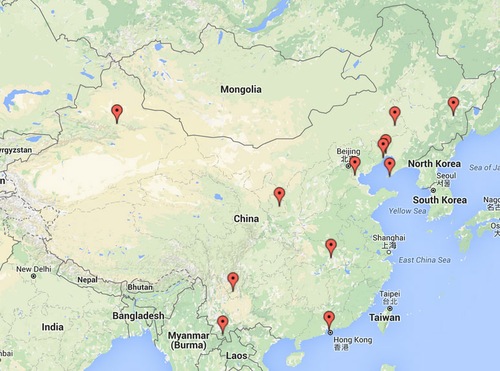 Ms. Wang Yuxia is from Yima Town. Her case was submitted to the Qingcheng County Procuratorate.

Mr. Li Zhongjin from Yima Town was released on bail pending trial after his family had 5,000 yuan extorted from them.

Ms. Guo Caiping from Zhenyuan County is still being held at the Ning County Detention Center.

Ms. Qu was arrested by officers from the city 610 Office and the Hedong Police Department on March 2, 2015. She has been held in the Hedong Detention Center. She was originally scheduled to be tried on February 23, 2016, but the hearing was postponed June.

Seven practitioners were arrested by officers from the Xiaozhuangzi Township Police Station and the Xiaozhuangzi Sentry Post when they distributed Falun Gong informational materials on June 8, 2016.

Kang Xuejin and other officers from the Qintai Residential Community Household Registration Office in the Hanyang District entered Ms. Pi Juyun's daughter's home, claiming that they were checking household registrations on the afternoon of June 7, 2016.

Mr. Pi, in her 80s, who lives with her daughter, was arrested and taken to the police station. The officers confiscated her Falun Gong books. They forced Ms. Pi to sign two sheets of paper. They took her home that evening and returned the books.

Ms. Wang Guixiang went to the Urad Middle Banner in Bayannur City to take care of her daughter, who was three months pregnant. She was arrested on May 18, 2016.

Seven practitioners from the Futian District were arrested by Futian Police Department officers on April 14, 2016. They have been held in the Futian Detention Center.

The police ransacked Ms. Wang Shuling's home and confiscated Falun Gong books, DVDs, brochures, and paper currency with Falun Gong information printed on it. She remains in custody at the Futian Detention Center.

Ms. Li Jinying was arrested for suing Jiang Zemin, the former Chinese Communist Party leader who initiated the persecution of Falun Gong. She is being held in the Jinghong City Detention Center.

Mr. Gao Yixi passed away on April 29, 2016, as a result of being persecuted. He was only 45 years old. His wife Ms. Sun Fengxia is still being held in the Mudanjiang Detention Center. Their daughter Ms. Gao Meixin, who is a high school freshman, has presented her father’s case of wrongful treatment to different authorities. She was threatened by school officials.

Ms. Ju Lanying and Ms. Fan Yingxia were arrested by officers from the Urumqi Economic and Technological Development Zone Police Station on June 1, 2016. They were taken to the Toutunhe District No. 3 Detention Center.

Mr. Xiong Guangrong was arrested and taken to the Shuanggou Detention Center on June 9, 2016, for talking to people about Falun Gong.

Officers from the Jinxiu Police Station in the Shahekou District went to Mr. Song Jibin's workplace and arrested him on May 13, 2016. AT the police station, they interrogated him about his lawsuit against Jiang Zambian and ordered him to sign paperwork. He was taken to the Jinnan Road Drug Rehabilitation Center for five days of detention.