(Minghui.org) A practitioner living in Sarnath, who has introduced Falun Dafa, also known as Falun Gong, in Sikkim, Ladakh, and other remote places in India, recently ventured into some of the most remote and inaccessible areas in Northeast India.

Northeastern India consists of seven states, often called the “seven sisters.” Their cultures are more similar to those found in Tibet, Myanmar, and China than in mainstream India. Permits and safety worries deter most travelers, yet the people here are among the friendliest in the whole subcontinent.

Mizoram is a tiny, mountainous, sparsely populated state, and the most inaccessible of the seven states. It is the land of the highlanders, literally called Mizos of the Mongoloid race. They are very hospitable to visitors and peace-loving.

The capital, Aizawl, is one of the least visited cities in India and is set on ridges of steep hills. It is one of the most literate and liberal communities in India. There is no discrimination based on sex, status, or religion, and people are bound together by a code of ethics called “Tlawmngaihna,” which, in essence, implies selfless service and concern for others or “helping others, at the cost of oneself” and respect for elders.

It was a daunting journey of three nights and four days, with a train delay due to a landslide and an eight-day stopover in Aizawl. A recent earthquake had caused landslides exactly where the practitioner was planning to visit.

The Capital City of Aizawl

The practitioner held a press conference in Aizawl to introduce Falun Gong to the local area. The event resulted in articles in three English and six Mizo local newspapers and news clips on local TV. When the practitioner thanked the over 80-year-old publisher for the detailed article he published in his newspaper, he replied, “You deserve it.”

The practitioner also organized a seminar where attendees learned the five exercises, watched a short documentary about the persecution of Falun Gong and signed the Doctors Against Forced Organ Harvesting (DAFOH) petition. 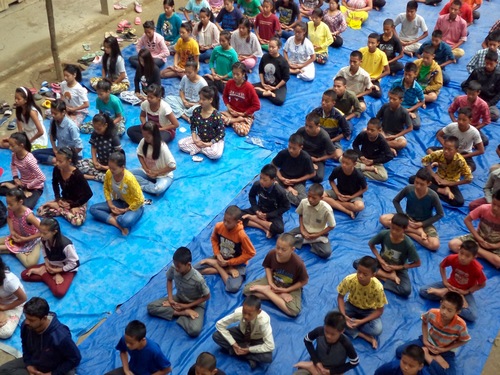 At a Mizoram School

Informational materials about Falun Dafa were given to the state library, the university library, the heads of important local organizations who promised to pass them on to their members, lawyers, and other offices.

On the last day in Aizawl, a VIP encouraged the practitioner to proceed to her final destination in Mizoram, far to the south, advising her not to give up in the face of hardships, to keep on giving one's best, and to not only “sow the seeds, but to wait till they sprout.”

Inspired by these words, the practitioner set out on an over 12-hour road journey to the final destination.

The practitioner recalled her experience, “There was an immediate and very profound feeling of finally 'coming home' and being in the right place at the right time. All previous hardships, tests, and tribulations seemed to just melt away.”

Chakmas are Tibeto-Burman and thus closely related to tribes in the foothills of the Himalayas. They have their own script and language, tradition and culture. They are Theravada Buddhists like many who live in neighboring Bangladesh and Myanmar.

Local officials fully supported the practitioner's plan to visit the schools, and in the following two weeks, she visited ten schools.

The climate was even hotter than usual, often above 40 degrees C (104 degrees F), and there was an electricity problem and limited water. There wasn’t a single guesthouse, hotel or restaurant, no Internet, phones that only occasionally worked, and only a few small shops. The only link with civilization was helicopter services twice weekly, which hadn’t been in operation for over a month.

“During my entire stay, people repeatedly expressed their appreciation that I had come to this remote part in the summer heat and unexpected rains,” shared the practitioner. “Once again, all hardships paled in comparison with the friendliness and hospitality of the people.”

Due to the heat, most school children gathered around five in the morning, even though some of them had to walk long distances. The practitioner met with teachers and showed a short documentary about the persecution of Falun Gong. It touched many hearts, and the viewers were anxious to sign the DAFOH petition.

All of the children and most of the teachers participated in learning the five exercises, and learned about the persecution in China. 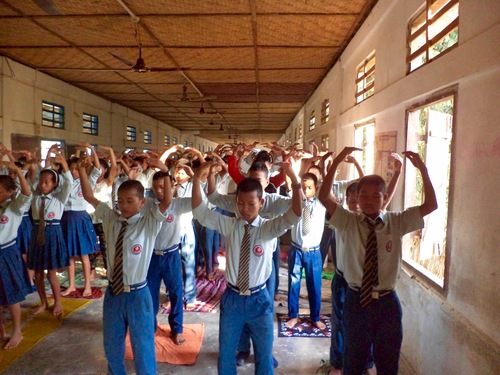 Senior Students in a school learning the exercises 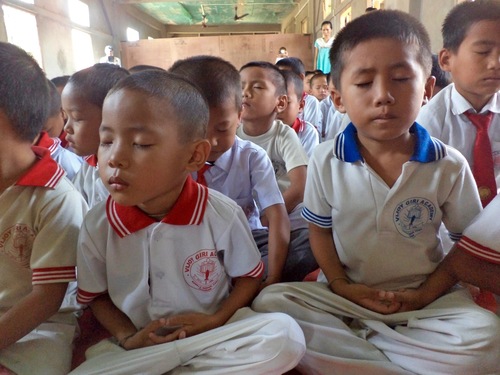 As May 13 was drawing near and no helicopter was in sight to travel back to Aizawl, the practitioner decided to celebrate World Falun Dafa Day at the very first school where Falun Dafa was introduced. The idea to celebrate here was met with immediate support from teachers, the principal, and others. Children made a large “World Falun Dafa Day May 13” banner and smaller banners with “Falun Dafa is good, Truthfulness-Compassion-Forbearance” is good in the local language.

The practitioner gave a short introduction on the significance of World Falun Dafa Day, followed by the chairman and principal expressing their thanks and good wishes. Four girls performed a local dance, and everyone did the five exercises. The program concluded with some students and a teacher singing “We Shall Overcome,” honoring those who are enduring the persecution in China.

Many teachers said they would remind the children about Falun Dafa's principles of Truthfulness-Compassion-Forbearance, and many people said they hoped the practitioner would visit again in the future. 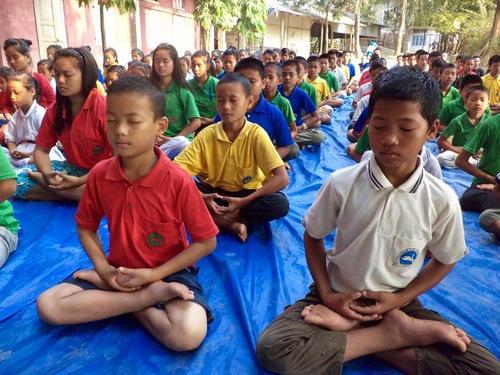 On two weekends, children from different schools and all those keen to learn the exercises came to practice them in an open public area.

“I am grateful for Master Li’s arrangement, care, and protection in reaching out to people and touching them with Dafa,” said the practitioner. “I sincerely hope that not only many seeds have been planted, but that many of them will sprout and eventually bloom in this distant part of India.”