Cultivation Experience of a Millennial

(Minghui.org) A generation of single children in China born after 1980, often referred to as millennials, often have very self-centered world views. How could they associate themselves with the cultivation of Truthfulness-Compassion-Forbearance? Tang Yunyan is one of them. Born and raised in China, Yunyan came to Italy two years ago to attend school. The following is her experience with Falun Gong (also called Falun Dafa) and the persecution in China.

When talking about self-cultivation in the past 20 years, Yunyan said, with a bright smile, “I'm the only child in my family. I have been living with jealousy since I was young. I was jealous of the classmates who got good grades in school. I was even jealous of my friends when my mother was very nice to them.” Seeing her pure sparkling eyes and outgoing personality, it was hard to imagine she used to be a jealous girl. 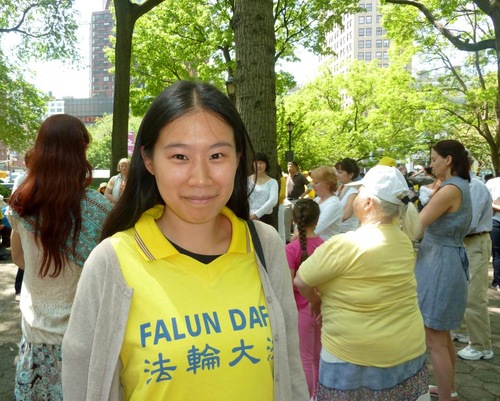 Tang Yunyan at the World Falun Dafa Day celebration in New York in May, 2016.

Yunyan was born and grew up in Beijing. She started practicing Falun Gong with her parents when she was in the sixth grade. Her entire family enjoyed a happy life, with morning exercises and evening Fa study every day. “My parents used to fight with each other a lot. But ever since they started practicing Falun Dafa, they no longer fought. I felt warmth in the family. It was such a great feeling. Even though the persecution has since separated my family, I always remember the best times we had before the persecution.”

“As I grew older, I gained a deeper understanding of the Fa. I realized I should eliminate jealousy. If I felt sad when seeing others doing better, I knew my jealousy was emerging, and I worked to eliminate it. As I did it repeatedly, my jealousy became less and less,” Yunyan said.

Yunyan and her mother were among the 10,000 Falun Gong practitioners who appealed at the National Appeals Office on April 25, 1999. Even though Yunyan was still too young to understand the significance of the appeal, she clearly remembers how orderly the Falun Gong practitioners were. She was most impressed by how clean the ground was when they left. No one left any trash behind.

Three months later, the Chinese Communist Party (CCP) launched the persecution, on July 20, 1999. The slanderous news about Falun Gong inundated TV and radio programs. Yunyan couldn't understand why, but she clearly knew that what was said in the news wasn't true. She said, “This belief helped me survive the hardest times. After I grew up, I found out why the CCP persecuted Falun Gong, why I had stayed firm, and what true cultivation is.”

Telling Classmates the “Self-Immolation” Was Staged

The CCP staged the so-called “self-immolation” on Tiananmen Square in early 2001. Yunyan was in middle school at that time. She thought, “The people I know who practice Falun Gong aren't like this at all.”

The next day, she started talking to her classmates about it. She said, “Did you watch TV last night? What it said (about Falun Gong) isn't true!” Thinking back, Yunyan said with a smile, “I was too young to be afraid. All I wanted to do was to clarify to my classmates that it was not true. They were afraid of hearing it though. As they ran away from me, I chased them and cried, 'It's a lie!'”

Yunyan's mother has been arrested and imprisoned three times, for 18 months, two years, and two and a half years. Like other Falun Gong practitioners, she bravely appealed for Falun Gong at Tiananmen Square as soon as the persecution was launched. The police recorded their names and addresses. The list was used to arrested them on holidays, and on Falun Gong related landmark dates.

Yunyan's smile disappeared. She said, “My mother had to leave home to avoid the persecution one time. We lost contact with her for a long time. I was very sad during that time. I worried about her every day, wondering if she was still alive. We were finally notified that she had been thrown into a labor camp. We had no idea how it had happened. She told us later that she had been arrested while waiting for a bus near Tiananmen Square.

Blessed with Wisdom by Falun Dafa

Yunyan didn't have a single peaceful day ever after the persecution was launched. On top of the imprisonment of her mother, she experienced the police harassing her family, searching their house, and seizing their property, all while she worried deeply about her mother. However, she always had good grades in school. Falun Dafa blessed her with wisdom.

Yunyan said, “I used to have bad grades before I practiced Falun Dafa. Even though I worked very hard, I simply couldn't learn well. Falun Dafa has made me bright. After practicing Dafa, I learned so much within a short time. I was admitted into a key middle school.”

The local 610 Office harassed her at school, but Yunyan's teachers did their best to protect her. One of the reasons was that she was such a good student.

Yunyan came to Rome to attend college a couple of years ago. She enjoys group exercise with local Falun Gong practitioners and clarifying facts of the persecution to Chinese people.

A Chinese man left a voice message for a local Falun Gong contact person one day. Since the contact person doesn't speak Chinese, he asked Yunyan to call back on his behalf. Yunyan was a bit concerned at first, not knowing what the Chinese man wanted to do. To her surprise, the young Chinese man apologized during the phone call. He said, “I have wronged Falun Gong. I thought you were like how the CCP has described. I had deep regrets after I learned facts about Falun Gong. It turns out that the CCP has lied to us! My family in China doesn't know this. I have to tell them!” Yunyan was very touched by his apology and strong wish to help spread the truth.

Yunyan and fellow practitioners visited stores in Chinatown one by one last year, telling people about quitting the communist organizations. Most people quietly listened to them. Some who just come abroad decided to quit as soon as they learned the truth. Yunyan said, “They made the decision from the bottom of their hearts.”

Though life has sent Yunyan to Italy, her heart is still with her motherland. She wishes to return home someday, and have the freedom of doing the Falun Gong exercises in a park and studying the Fa with her parents. She believes that day isn't far away.

“Israel: Art Exhibition Raises Awareness of the Persecution in China”

““Inner Peace, Health, and Happiness. These Are What Falun Gong Has Brought Me””