(Minghui.org) The streets of the Asian community of Eastwood, a suburb of Sydney, Australia, were lined with local Falun Gong practitioners raising awareness about their peaceful spiritual practice and the persecution it endures in China on June 11. Many people were shocked to learn about the ongoing organ harvesting atrocities targeting Falun Gong practitioners and other prisoners of conscience. 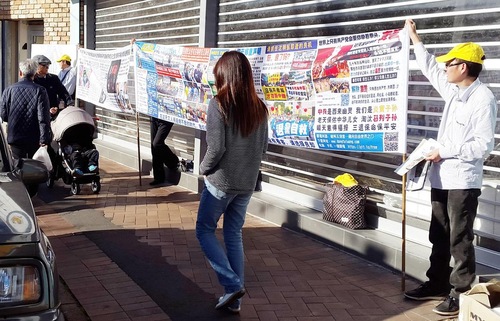 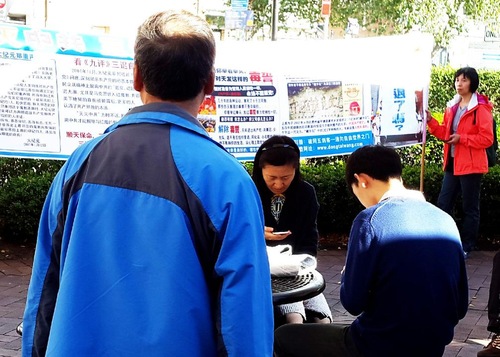 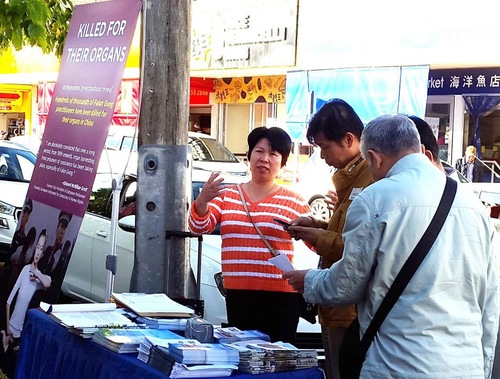 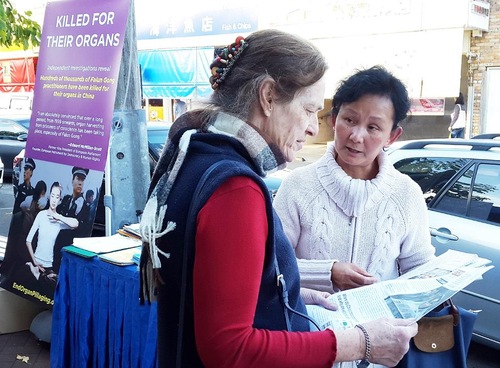 “Overseas Chinese Should Step Up and Say 'No!'”

Mr. Heng, a Chinese Malaysian business owner who works in Australia, said, “What you are doing is great! I hope more people will learn about the CCP's crimes against Falun Gong practitioners. You have never created any trouble for anyone. I've observed you doing the morning exercises and your peaceful protests. No Australian has ever complained. Why does the CCP persecute Falun Gong? The Chinese government should allow them to practice openly.”

Mr. Heng was adamant that former Chinese leader Jiang Zemin, who initiated the persecution, should be brought to justice, “It's very important!” 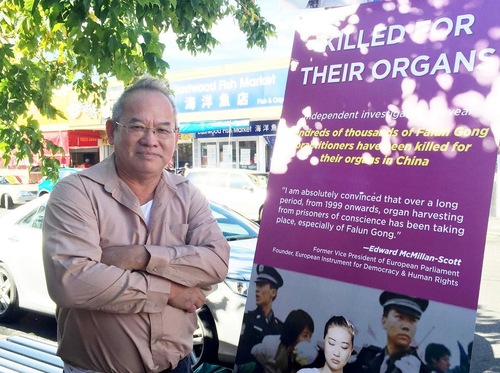 Mr. Heng said, “We overseas Chinese do our best to bring honor to the Chinese people. But the CCP brings us shame and humiliation with its crimes of persecution and organ harvesting. Overseas Chinese should step up and say 'No!' It's critical!”

“Governments Are Supposed to Protect People but the CCP Doesn't.” 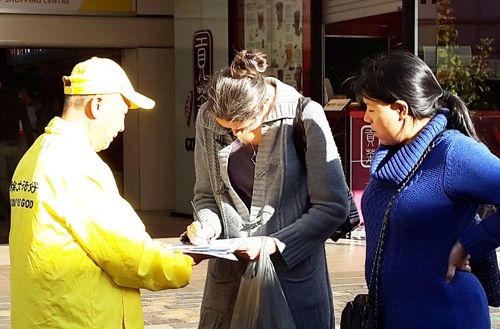 Bernadette (middle) and Nicole (right) sign a petition calling for an end to organ harvesting.

Bernadette and Nicole both signed the petition calling for an end to the organ harvesting in China. Bernadette said, “Governments are supposed to protect people, but the CCP doesn't. How can it persecute people who follow Truthfulness- Compassion-Forbearance? What the Chinese government is doing is ridiculous.”

She said she sees practitioners' activities and peaceful protests in many places, and always supports them. She's even told others about it and asked them to sign the petition.

Nicole added, “We should expose what the Party is doing to stop it. I hope you will do more to tell people about Falun Gong. I think the CCP will collapse soon.”

Practitioner Ms. Gao helped more than 20 Chinese people quit the Communist organizations that day. She said, “Many young people from China don't know much about the CCP's persecution against Falun Gong. They think it has nothing to do with them, but after they read the flyer and learn more about it, they willingly quit the Communist organizations. Those who have previously quit are happy to see us and treat us like we're old friends.”

Falun Gong practitioners have been exposing the persecution and helping people withdraw from Communist organizations in Eastwood every weekend. More and more Chinese people are learning about the persecution. Newly immigrated Chinese eagerly take the informational materials so they can know the truth about what's going on in China.

“Perth, Australia: “I Want To Be a Force for Positive Change””