Greece: Students at Aristotle University of Thessaloniki Impressed by Film Free China - The Courage to Believe

(Minghui.org) Students were moved and shocked by the movie Free China - The Courage to Believe, which was screened May 23, 2016 at the Polytechnical Faculty of Aristotle University of Thessaloniki. 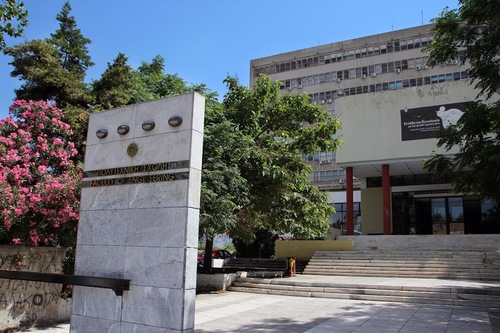 An Erasmus student (“Erasmus” is a European Union student exchange program) from Hungary said, “I already knew a lot about the terrible human rights situation in China, but the forced organ harvesting of live practitioners for profit really shocked me. I mean, this is still happening right now.” He was very interested in the movie from the start, because he knew about how Uighurs are suppressed in China.

He continued, “I was shocked to learn about these horrendous crimes, but at the same time the movie also gave me hope, that there is a change coming soon, a peaceful change, because of the peaceful efforts of Falun Dafa practitioners.”

The movie Free China - The Courage to Believe tells the stories of Zheng Zeng and Charles Lee, two courageous people who were detained and tortured in a Chinese labor camp for their belief in Falun Dafa. Also known as Falun Gong, it is a traditional Chinese qigong self-improvement practice based the principles of Truthfulness-Compassion-Forbearance.

By 1999 the practice had grown to over 70 million practitioners, more than the number of Chinese Communist Party (CCP) members, prompting the former dictator, Jiang Zemin, to order a massive propaganda campaign and brutal persecution. Dr. Charles Lee, the other protagonist in the Free China movie, had tried to counter the propaganda by attempting to broadcast uncensored information on state-controlled television.

Another Erasmus student from Italy said, “I am studying languages, including Chinese, so it is really strange that I had never heard about the persecution of Falun Dafa before.” A practitioner explained how the media in China is censored, making it necessary for people outside of China, who are not at risk of being detained, to expose these crimes.

A Greek student from one of the university’s film clubs asked for more information about the movie and wanted to show it to friends and family. She was one of the supporters who had helped to publicize the event on Facebook.

Two students from one of the university’s film clubs had the heart to support organizing the screening at the university after a Falun Dafa practitioner from Germany, who was staying in Thessaloniki for Erasmus, introduced it to them. Without these supporters the event could not have been taken place. The two not only advertised the event on Facebook, but also organized the room and technical details for the screening.

Many students who viewed the film said that they hoped the movie would be screened more often, and that many more people could attend the screenings, because everyone should know about what is going on (referring to the persecution of Falun Gong).

After the movie the students took more information about Falun Dafa and the persecution, and signed a petition calling for justice.