(Minghui.org) “My Parliament Member co-sponsored the resolution, because we are worried about the human rights situation in China. We know [about] the persecution of Falun Gong, so we want to join your peaceful resistance. We support you,” said Lukas Bachta, an assistant to a Member of the European Parliament (MEP) to Falun Gong practitioners in front of the European Union (EU) building in Strasbourg, France. 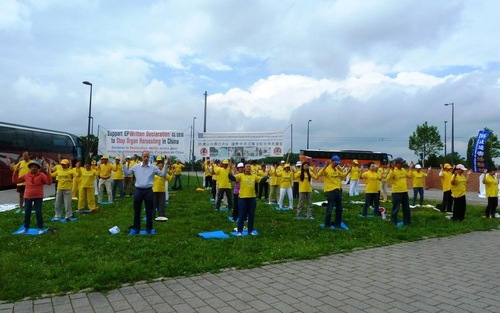 Lukas Bachta, from the Czech Republic, said that he and his MEP want to help stop the illicit organ trade in China. He took part in the practitioners' group exercises for 30 minutes.

Falun Gong practitioners held activities in Strasbourg the week of June 6 while the European Parliament (EP) was in session. They gathered to show their support for the statement (48/2016) cosigned by 12 MEPs asking the European Parliament to investigate the state-sanctioned organ harvesting of prisoners of conscience in China, the majority of whom are Falun Gong practitioners. If half of the MEPs sign the statement, the request will automatically become a resolution. 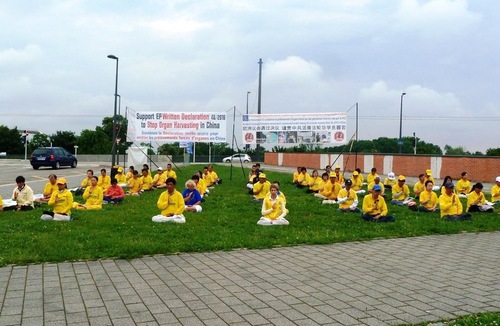 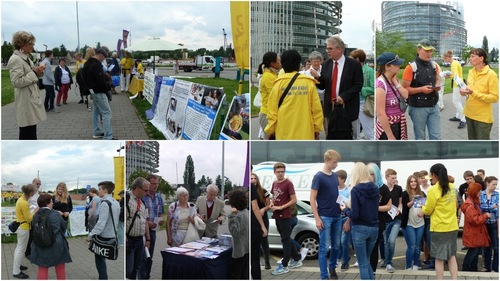 Talking to the public about the atrocities taking place in China 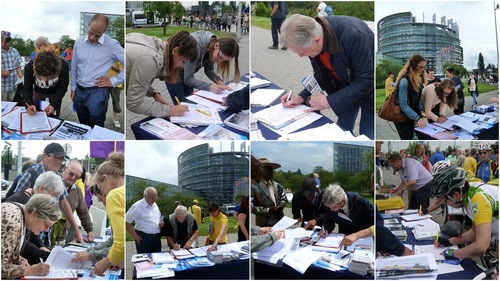 Many MEPs met with practitioners over the week. So far, more than 100 have co-signed the statement. Some staff members from MEP offices attended the practitioners' event, signed the petition, and asked for more information about the forced organ harvesting.

Bertrand, an EU staffer, remarked, “Falun Gong is peaceful. I am interested in it. I see your compassion, which is permanent. The persecution is meaningless and ugly. You will win.” 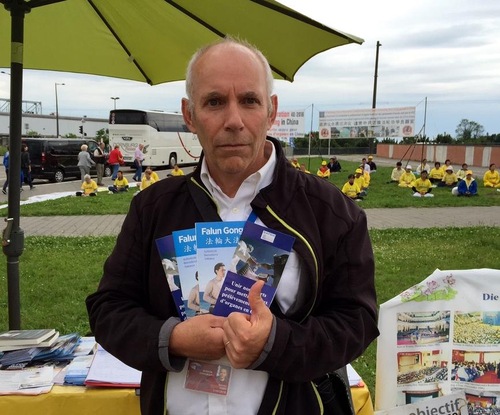 Bertrand, an EU staff member, signed the petition against forced organ harvesting in China. He said, “I want to help, so that Falun Gong [practitioners] can freely practice their belief, and the world will be a better place.”

Raphael Mukandila Ngalula from Congo had talked to practitioners last month while the European Parliament was in session, and learned about the organ harvesting atrocities in China. He was in Strasbourg to meet with MEPs. “This is intolerable in the 21st century,” he said. “Keep up your good work. People in China should have the freedom of speech, just like the Europeans. They should enjoy justice, tolerance, and freedom of thought. These are the values that the Chinese government should accept and promote.”

Raphael said that he brought up the organ harvesting in China during his meetings with the MEPs, and urged them to co-sign it. One of the MEPs from France did sign the statement. 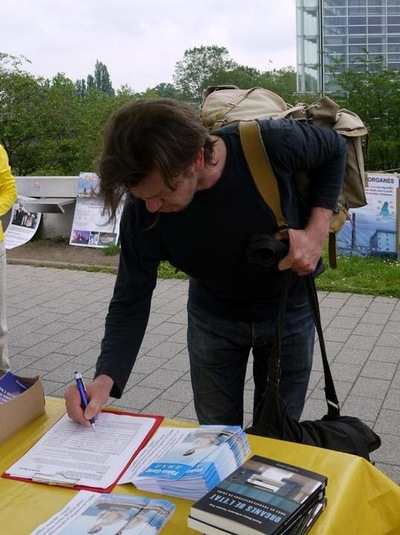 Nicolas, a reporter from a French student radio station, talked to practitioners for an hour. He came back the second day for a more detailed interview and also signed the petition.

Fabienne Saits from France had never heard about the persecution of Falun Gong. “I was shocked. It is terrifying. It has never been reported by any media,” she said. A practitioner told her that many governments and organizations have chosen to turn a blind eye to this atrocity out of concern for economic interests. Fabienne noted that overemphasis on economic interests sometimes hurts people.

She was on her way to a meeting and said she would collect signatures from the 100-plus attendees who would be there. She added that she would also ask her MEPs for help. “We support you. Our hearts are always with you. I will tell more people about this,” said Fabienne.