Falun Gong practitioners held a series of events during the week of June 6 at the European Parliament in Strasbourg, France, to raise awareness about the atrocities taking place in China and to voice support for the recent investigation request.

Practitioners distributed materials about organ harvesting atrocities to Parliamentary staff and visitors. They also collected signatures on a petition calling for an end to the persecution of Falun Gong in China. 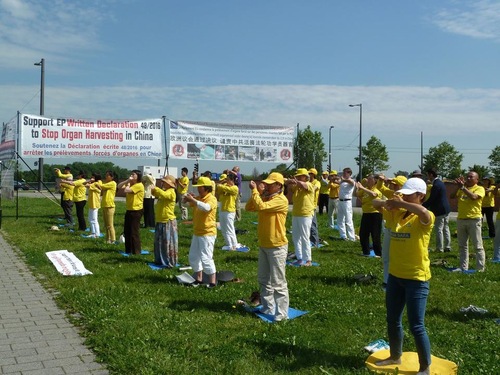 Falun Gong practitioners hold group exercise practice in front of the European Parliament in Strasbourg, France on June 7, 2016, to raise awareness about the persecution in China and to support a potential resolution to request an investigation into forced organ harvesting of prisoners of conscience. 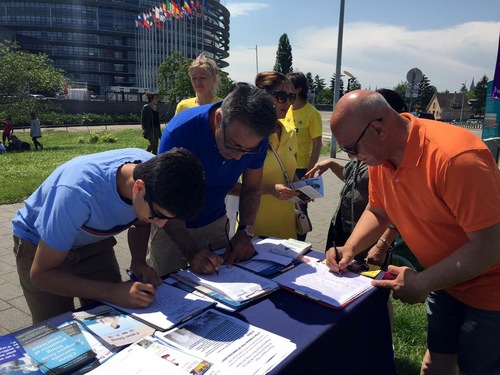 Passers-by near the European Parliament sign a petition against the persecution of Falun Gong. 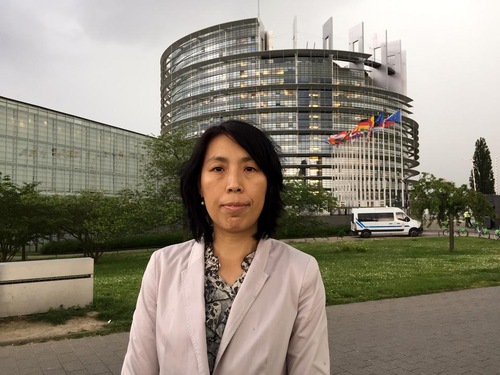 Liu Wei was incarcerated several times in China for practicing Falun Gong. While in detention, she almost became a victim of live organ harvesting.

Ms. Liu Wei, a Falun Gong practitioner who now lives in Germany, spoke at the event to share her past experience in China. She was incarcerated in forced labor camps and jails for a total of 16 months for her belief in Falun Gong. She was tortured and forced to do unpaid labor, such as knitting sweaters, for 15 hours per day. She was deprived of sleep as a means of torture. Years later, Ms. Liu realized that she'd almost become victim of live organ harvesting.

“Nobody was concerned about my health in prison,” recalled Ms. Liu, “But they arranged physical examinations for us Falun Gong practitioners.” She had blood drawn, and doctors examined her heart and kidneys with ultrasonic equipment.

Ms. Liu described the first physical examination in a detention center. “One day, the guards ordered all Falun Gong practitioners in the center to have a physical examination. We had blood drawn. A doctor asked me, 'Do you have any family history of illness?' I answered, 'My grandfather died of heart disease. My mother has heart problems. I had heart problems too before I began practicing Falun Gong.'”

She recalled that the guards did not allow the practitioners to ask the doctors any questions, nor would they tell them why they were being examined. It wasn't until she'd moved to Germany that Ms. Liu read reports about live organ harvesting in China and finally understood the chilling reason for the physical examinations. Apparently, she escaped the horror due to concerns over her family's medical history. Many Falun Gong practitioners who have also fled China have reported similar experiences.

Visitor to European Parliament: This Persecution Should Never Have Happened 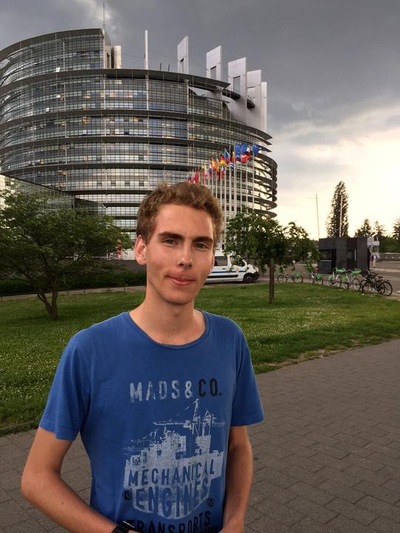 Marlon Hilden, a German undergraduate student, signs the petition against the persecution of Falun Gong.

Marlon Hilden, a German undergraduate in International Politics, signed the petition calling for an end to the persecution after visiting the Parliament building. He said, “I am very concerned about this issue. I think it is necessary for the European Union to stop this illegal organ trafficking and help stop the persecution.” 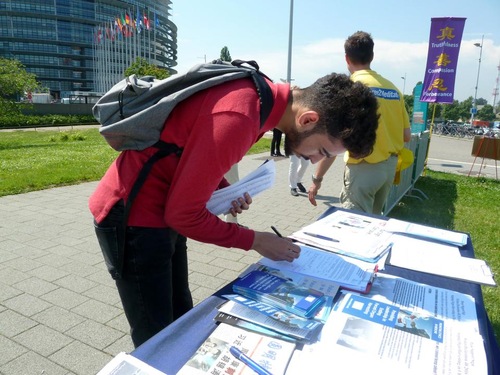 French undergraduate Nacim Amane: “This persecution should never have happened.”

French undergraduate student Nacim Amane said, “I think your protest is very effective. China's persecution of Falun Gong is incomprehensible. This persecution should never have happened.” He signed the petition, adding that he hopes his signature will help bring about an end to the persecution.

Practitioners from Ireland Participate in the Week's Events 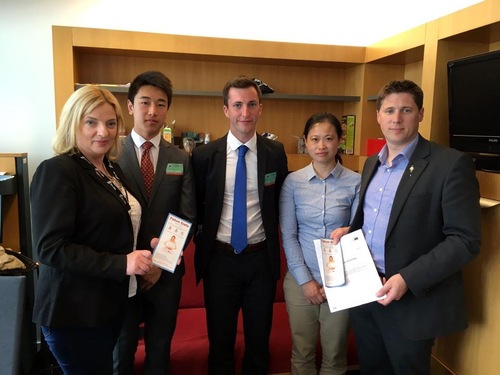 Several practitioners from Ireland traveled to Strasbourg to take part in the week's events. Sixteen-year-old high school student Li, on his first week of summer break, came from Dublin. He and two other practitioners made the eight-hour journey together and stayed in Strasbourg for several days.

Li participated in the awareness raising on Monday, June 6. He speaks fluent English and some French, and talked with Parliament staffers and visitors at the Falun Gong stand.

Li said, “I have practiced Falun Gong since I was very young. Participating in this event to raise awareness to MEPs is a great opportunity.”

“Young Dafa Disciples Should Also Have Strict Requirements for Themselves”