Beijing: Summary of Persecution Between Late 2015 and April 2016

(Minghui.org) According to data compiled by Minghui.org, 18 Beijing residents were sentenced to prison for practicing Falun Gong between late 2015 and April 2016. In addition, 6 Falun Gong practitioners were tried and are currently awaiting verdicts, 3 are formally arrested and facing trial, and 5 were arrested and are still detained without formal approval of their arrests.

Moreover, between February and April of this year, 64 people were arrested and over 18 were harassed by police or local officials for their belief in Falun Gong.

Eighteen Falun Gong practitioners were sentenced to prison terms ranging from 1 year to 7.5 years between October 2015 and April 2016. Some have been detained for two years; some were sentenced without the authorities notifying their families or lawyer as required by law. The mean sentence was 3.56 years, and the median was 4 years. 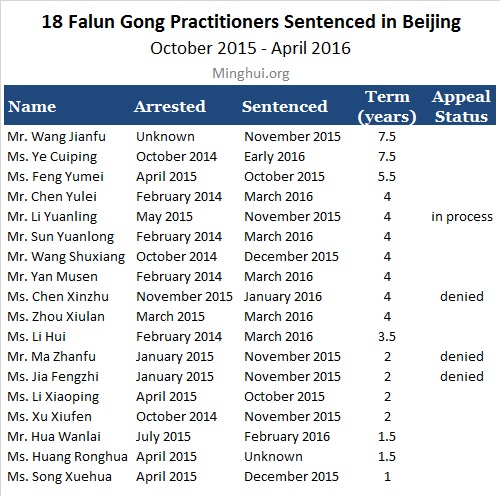 Six practitioners were tried or scheduled to be tried, but no verdict was given or no information about the trials is available.

Ms. Wang Rulan and Ms. Xun Xiuying were arrested in April 2015 and tried in December 2015.

Ms. Yue Guixia was arrested on September 18, 2015 and has been detained at Pinggu Detention Center since. Her case has been submitted to Pinggu Procuratorate Office.

Ms. Wang Lijun was arrested on January 20, 2016 and has been detained at Fengtai Detention Center. Her arrest has been approved, and she is facing trial.

Ms. Zhao Suzhen was arrested on November 11, 2015 and detained at Haidian Detention Center. Her arrest was approved by the Haidian Procurator Office, and her case has been submitted to Haidian District Court for trial.

Five practitioners were arrested and still held after their legally allowed detention periods. They have not been formally arrested or indicted.

Ms. Fu Yongmin was arrested in December 2015 and currently detained at Changping Detention Center.Ms. Bai Shuhui and husband Mr. Xu Xuekun were arrested in November 2015.Mr. Sun Fuyi was arrested in January 2016.Ms. Zhang Zhaoyu was arrested in July 2015. Her case was submitted to and rejected by the procuratorate for lack of evidence, but the police still would not release her.

Around 64 Falun Gong practitioners were arrested between February and April. Police searched their homes and confiscated personal items. There is no information about their current whereabouts.

“Cured of Leukemia Through Practicing Falun Gong, Woman to Be Tried for Refusing to Give It Up”