(Minghui.org) Today's news from China includes incidents of persecution that took place in 26 cities or counties in 14 provinces. According to this report, 22 Falun Gong practitioners were subjected to mistreatment during their detention, and at least 43 practitioners were illegally arrested. 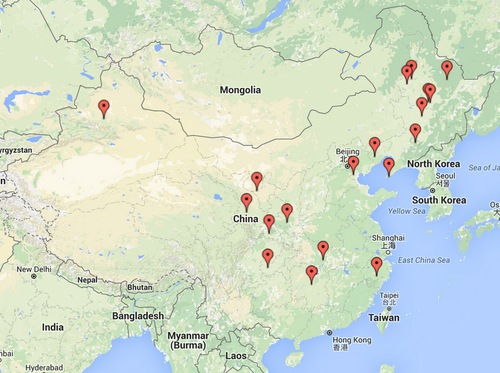 Ms. Wu Yuhua from Fengnian Village in Fanrong Township was secretly tried in the Fuyu County Court on the morning of April 13, 2016.

Ms. Gao Guiqing was arrested by officers from the Qingyuan Town Police Station when they were talking to people about Falun Gong on the morning of April 14, 2016. She was taken to the Fushun City Detention Center for 10 days of detention.

Mr. Wen Weilong was arrested at the home of Mr. Wang Yalong and his wife Ms. Sang Xiaochun on the morning of April 13, 2016.

Mr. Liu Hao from the Daowai District was arrested and taken to the Dayoufang Police Station on the afternoon of April 12, 2016, for talking to people about Falun Gong.

Mr. Liu Xiong, Mr. Hu Fengcheng, and Ms. Yang Dongmei were arrested by officers from the Jianghan Oilfield Police Department and local police in the Xiantao area early in the morning on April 12, 2016. The three practitioners are being held in the Guanghua area in Qianjiang City.

Ms. Sun Fenghua from the Daowai District was arrested by officers from the Lihua Police Station when she was sending money using her identification card in a bank on the afternoon of April 12, 2016. She was handcuffed behind her back and taken to the Harbin City No. 2 Detention Center.

Ms. Qin Li was mistreated by guards and criminal inmates, who were assigned by prison authorities to closely monitor practitioners, in the No. 1 Ward of the Chongqing Women's Prison for refusing to be “transformed.” She was forced to repeatedly copy the prison regulations. She was strictly restricted from sleeping and using the restroom.

Ms. Xiao Shaogui from Yongchuan District lost consciousness due to abuse in the No. 1 Ward of the Chongqing Women's Prison.

Ms. Sun Cunying was arrested at home by officers from the Shapotou District Domestic Security Division on April 7, 2016, for suing Jiang Zemin. She was taken to the Zhongwei Detention Center. The detention center refused to admit her due to her advanced age. She returned home that night.

Ms. Chang Xiu'e was arrested at her barbershop by officers from the Shapotou District Domestic Security Division on April 8, 2016, for suing Jiang Zemin. She was detained in the Zhongwei Detention Center.

Ms. Mo Ruzhi was arrested by officers from the Shapotou District Domestic Security Division on April 12, 2016, for suing Jiang Zemin. She was also detained in the Zhongwei Detention Center.

Mr. Huang Liming and his wife Ms. Zhang Fengxia were arrested at home by officers from the Nanyang Police Station on March 23, 2016. Mr. Huang has returned home. Ms. Zhang remains in custody in the Zhaijiadian Detention Center in the Jinnan District.

Mr. He Jinlin was arrested and held in custody in mid-March 2016. In the detention center, he was often interrogated at night by the Pre-Trial Division officers. He was deprived of sleep and mentally tortured. The guards cuffed his hands and feet and lifted him off the floor against the wall because Mr. He insisted on doing the Falun Gong exercises. Mr. He now needs help to eat and use the restroom.

Ms. Liu Fengqin from Zhuanghe City was arrested by officers from the Lizifang Police Station on the afternoon of April 14, 2016.

Ms. Liang Cuirong from the Jinshantun District was arrested at home by Qin Handong and other police officers on April 14, 2016. The officers confiscated Falun Gong books and 2,000 yuan in cash.

Ms. Yang Shujun was tried in the Fularji District Court on April 12, 2016.

Ms. Tou Caijuan was tried in the Jinyun County Court on the morning of April 15, 2016. Ms. Tou is not able to take care of herself after being abused during the persecution.

Ms. Xiao Jianrong was arrested on March 31 for refusing to give up her faith in Falun Gong, a spiritual discipline being persecuted by the Chinese communist regime.

The police notified Ms. Xiao's daughter, who lives in Shanghai, of the arrest on April 2. The daughter returned to Kunning three days later and visited the police station.

At her insistence, the police returned the items confiscated from her mother, including cash, IDs, house key, and cell phones. She signed the list of confiscated items, but the officer in charge refused to put down his name.

Ms. Xiao regained her health after she began to practice in the 1990s, but she had relapses of her symptoms after she stopped practicing in 1999 when the persecution began.

She resumed practicing Falun Gong in 2011 and soon became illness free. She was determined to tell people the persecution is wrong but that landed her in police custody.

Ms. Lin's trial was held at 2:00 p.m. in a room less than 10 square meters. Only her husband was allowed to observe the proceedings; more than a dozen other family members and friends were unable to enter. Lawyer Shi Fulong entered a non-guilty plea for her. The trial lasted nearly 2 hours.

Both practitioners have been held in the Huludao Detention Center following their arrest with other practitioners on November 9, 2015.

Ms. He Tianfen was formally arrested on March 7, about a month after she was taken into custody for distributing information about the persecution of Falun Gong.

Her lawyer from Beijing saw her in the detention center on April 10. During their two-hour long meeting, Ms. He explained to her lawyer why she worked hard to tell the public that the persecution of Falun Gong is illegal.

The lawyer acknowledged that he had read many reports about how the Chinese communist regime fabricated evidence to frame Falun Gong. He expressed his determination to defend her innocence.

Mianyang Intermediate Court held an appeal hearing for four local practitioners: Li Qun, Zhong Shuirong, Tan Xiaoling, and Yang Guangmin, who were all illegally sentenced for refusing to give up their faith in Falun Gong.

The defense lawyers emphasized that the persecution is inherently illegal, because there is no law that says practicing Falun Gong is a crime. They demanded that their clients be acquitted.

The four practitioners also testified how Falun Gong helped them to become better people and pointed out there is nothing wrong with their exercising their constitutional right to freedom of belief.

The judge adjourned the proceedings without issuing a verdict.

Li Qun had been sentenced to 7 years, and Zhong Shuirong, Tan Xiaoling and Yang Guangmin each to 8 years during a trial on December 3, 2015.

The four practitioners have been detained ever since their arrest on September 10, 2014.

Ms. Mo was arrested on August 3, 2015, while distributing information exposing the persecution of Falun Gong. She developed high blood pressure due to abuse she suffered in detention.

Even though Ms. Mo complained about dizziness from high blood pressure during her April hearing, the judge refused to halt the proceedings.

It is not clear if Ms. Mo intends to file an appeal.

Lanzhou Intermediate Court issued an order on March 23 to uphold the prison sentences given to six local practitioners for their faith in Falun Gong.

Ms. Zhang Yi recently appealed her three-year sentence for refusing to give up her faith in Falun Gong.

The engineer from Liangshanzhou Highway Bureau was arrested on January 28, 2015, while reading Falun Gong books with a few friends. She was sentenced to three years on December 24, 2015, and fined 10,000 yuan.

Liao Ancai and Guo Bin were also sentenced around the same time for their faith in Falun Gong. All three practitioners are currently held in the Xiaomiao Detention Center and have filed appeals.

The police kept moving her from one facility to another, but they never informed her family as required by law.

Ms. Xu's elderly father recently went to Fangshan Detention Center to deposit money for her, but was told she had been transferred to Daxing Third Detention Center. He rushed there, only to learn that his daughter was not there, either.

He called the relevant government agency to inquire about his daughter's whereabouts, but no one could given him an answer.

The Tianjin No. 1 Intermediate’s Court heard Mr. Shi Fuhua’s appeal on the afternoon of April 5, 2016. The judge seemed inclined to uphold the original sentence.

Mr. Shi is still being held at the Nankai District Detention Center. He has severe high blood pressure as a result of ill-treatment.

Mr. Jiang Xiandong was employed at the Daxing Statistics Bureau. He was arrested on June 21, 2014, and sentenced to two years in prison in the Daxing Court on October 30, 2015. He has been held at the Beijing Detention Center. He is due to be released on June 20, 2016.

Mr. Zhang Hongru’s mother wrote a letter to the Changping Detention Center where he has been held. The detention center notified Mr. Zhang’s family on the morning of April 5, 2016, saying they were allowed to visit him the next day. Mr. Zhang’s mother, sister, and nephew went to see him in the detention center.

The Daxing Court tried Ms. Kang Lijun on the morning of April 14, 2016. Ms. Kang said she practices Falun Gong and tries to be a good person, that she did not do anything wrong or break any laws. Her lawyer pled not guilty on her behalf and said that she should be released.

The judge interrupted Ms. Kang’s self defense and said the court was not a place for preaching. He announced an adjournment.

“Clarifying the Facts about Falun Gong with Confidence and Dignity”