(Minghui.org) More than one hundred practitioners from Europe performed the Falun Gong exercises in yellow t-shirts in front of the National Archives in New York City in the morning of May 14, 2016. Their slow, gentle exercises and soothing music became a unique scene at the busy tourist attraction. Many people stopped to find out information about Falun Gong. 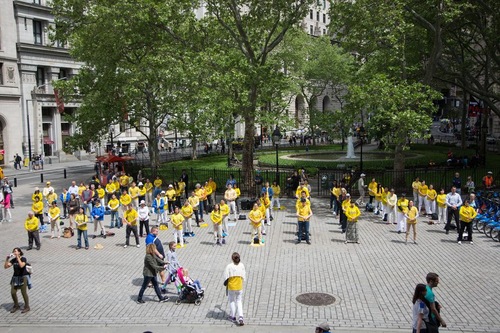 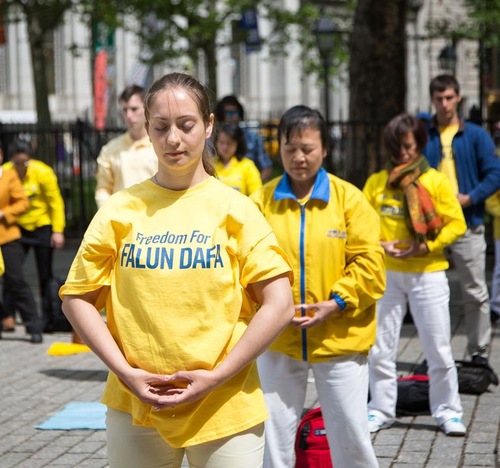 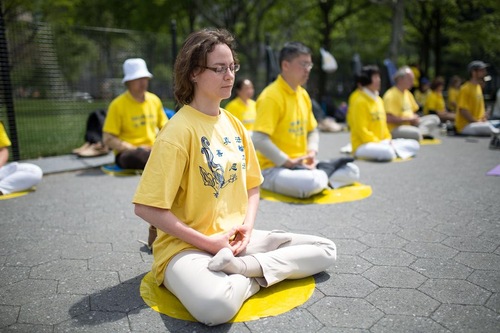 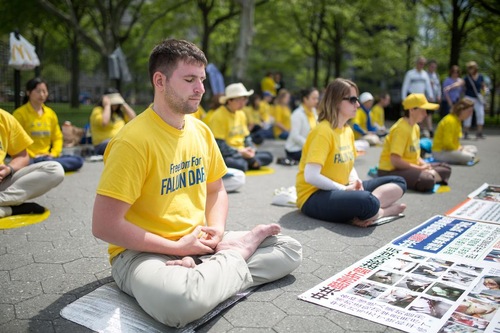 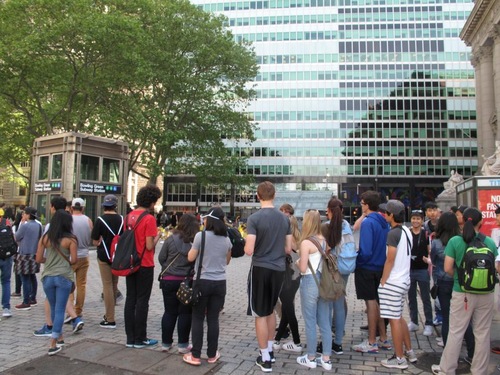 Practitioners from the Europe performed the Falun Gong exercises in front of the National Archives in New York City on May 14, 2016.

Bowling Green Park and Battery Park, right next to the National Archives and ferry to the Statue of Liberty, see crowds of tourists from all over the world every day. Many are from mainland China.

Because Falun Gong is persecuted by the communist regime in China, it was the first time for many Chinese tourists to see people doing the Falun Gong exercises. Practitioners distributed flyers and talked to the tourists about the brutal persecution, including the state-sanctioned harvesting of organs from living practitioners imprisoned for their faith.

Young Man: “What You Are Doing Is Great!”

A young man from Germany carefully read the Falun Gong flyer and told a practitioner that he couldn't understand why the Chinese regime would suppress such a peaceful group of meditators. The practitioner used examples of East Germany and other formerly communist countries in eastern Europe, and told him how the Chinese Communist Party (CCP) has been hiding its brutal persecution from the international community. The young man, having understood why the persecution is taking place, encouraged the practitioner, “What you are doing is great!” He took pictures of the exercise group and planned to post them on Facebook.

Maximino V, who works near the park, was happy to see people doing the Falun Gong exercises on his way to work. He followed the practitioners to learn the exercise movements and said he felt very relaxed.

Italian Who Has Worked in China: “Falun Gong Is Great!”

Rebecca from Italy took pictures of practitioners doing the Falun Gong exercises while waiting for her travel companion. When a practitioner approached her, she started speaking in fluent Chinese. She said she had worked in China for 8 years and knew the Chinese Communist Party well. Upon hearing about the regime's ongoing persecution of Falun Gong, Rebecca said, “The CCP is terrible!” Learning that practitioners around the world are exposing and working to stop the persecution, Rebecca said, “Falun Gong is great! Wish you success!”

Student from Bangladesh: “I Really Feel the Peaceful Energy Here!” 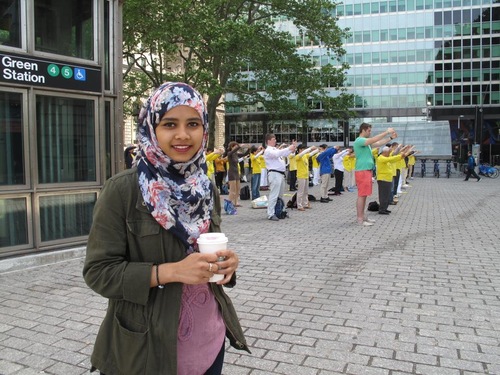 Akhi Begum, a college student of psychology from Bangladesh, was fascinated by the Falun Gong exercises. She took pictures of the scene and asked a practitioner for more information. She was surprised to learn that Falun Gong is persecuted by the Chinese regime.

“Falun Gong looks great! But what's happening in China, especially the organ harvesting, is shocking and saddening! They look very calm! I really feel the peaceful energy here! There seems to be some supernormal power. It's not easy to concentrate on meditation in such a noisy environment!” Akhi said.

Akhi added that she wishes more people would know about Falun Gong and the persecution.