The Voice of Falun Gong is Heard in New York

(Minghui.org) New Yorkers saw Falun Gong practitioners at every corner in Manhattan last week as they celebrated the 17th World Falun Dafa Day. One of the biggest wishes the 9,000 practitioners from all over the world have is for more people to learn what Falun Gong really is, as they call for help to stop the persecution in China.

Persistent Despite the Rain

Falun Gong practitioners assembled en masse outside the Chinese Consulate for a few hours each evening last week to protest the persecution that continues in China.

It was cold and rainy on Friday. Passersby were surprised to see practitioners continuing their exercises in the rain. An hour later, the sun came out, and many people asked practitioners about Falun Gong and their experiences. 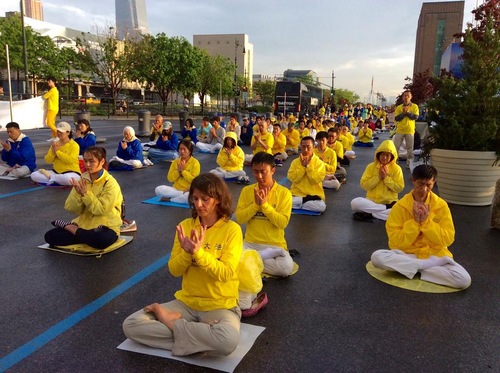 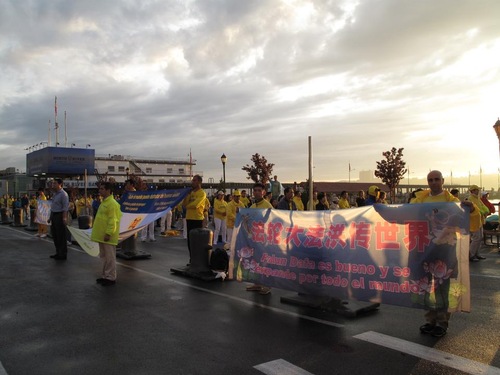 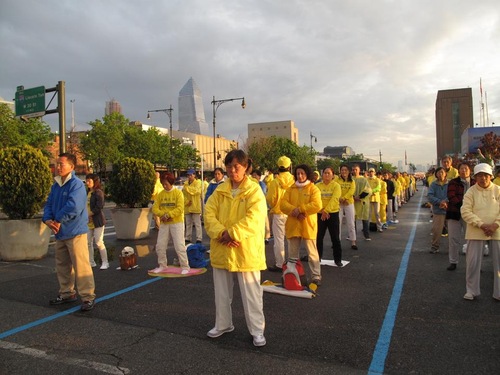 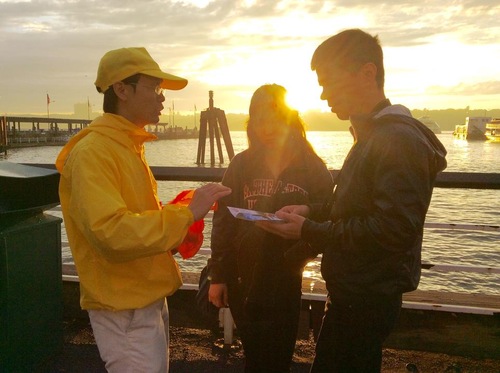 Sinikka Suontakanen, 65, from Finland, started practicing Falun Gong in 2000 after reading the book Zhuan Falun (the main book of Falun Gong). “I consider myself very lucky that I found the practice of Falun Gong,” Sinikka said. 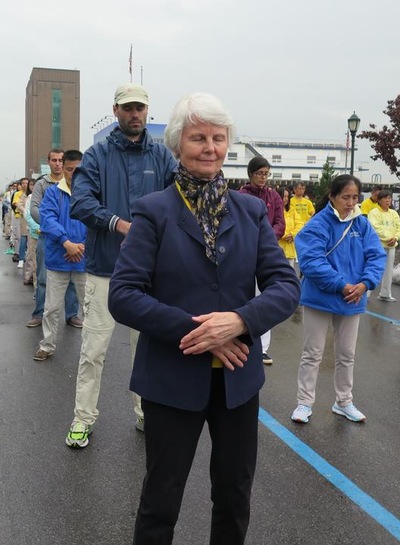 “Before I started practicing Falun Gong, I always blamed others whenever I had conflicts. I was exhausted,” she explained.

“Falun Gong teaches people to look inward for our own problems when we have conflicts. I strive always to do so... I feel that I am walking on the right path,” she said.

Sinikka wants the consular officials to understand that they should not follow the Party's official policy of persecution. “Do no evil, that is what I want to tell them,” she said. 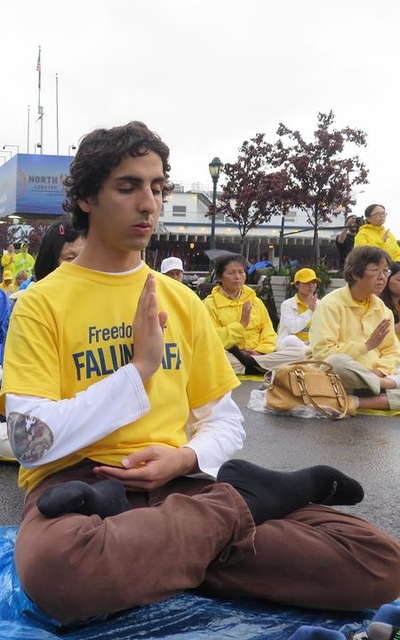 “It was two years ago, in July. A thought came into my mind out of nowhere that I should try meditation. I had never tried it before. I thought that meditation should be done in a park, so I went to Park Villa Torlonia close to my home, where I saw a group of people meditating.”

“I didn't want to interfere with them, so I watched and imitated them from a distance. Amazingly, as soon as I started imitating their movement, I felt a strong beam of energy rushing into my body. That was a feeling that I never had before.”

“One of them invited me to join them, and that is how I started practicing Falun Gong,” Marco smiled, “That summer, many wonderful things happened to me.”

“I started to read Zhuan Falun a few months later, where I found answers to questions I had long been looking for… It helps me to improve myself,” he said. 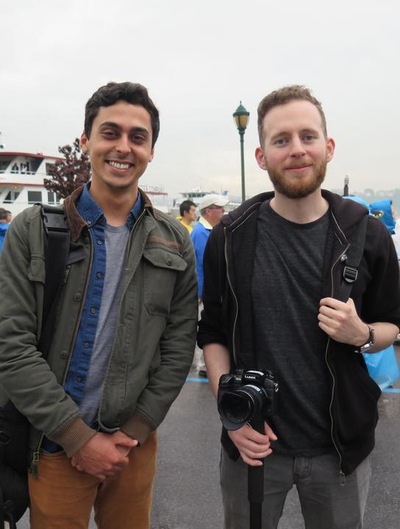 Jonathan Franco and Eli Susser took a lot of photos of practitioners. Their supervisor at People TV studio saw practitioners in front of the Chinese consulate on Thursday, and learned about the persecution of Falun Gong in China. Today, he assigned Jonathan and Eli here to cover the story.

They remarked that the messages from Falun Gong are encouraging and make people think. 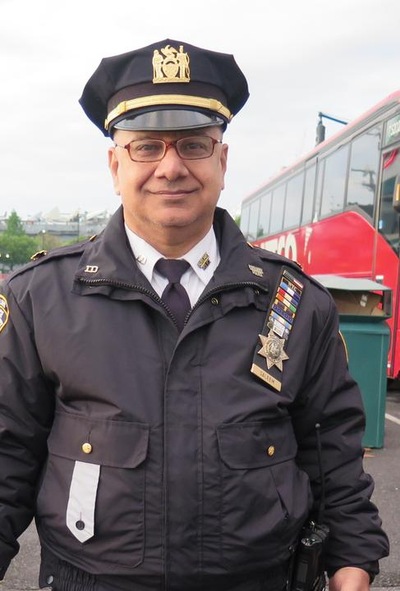 Saleem, a 9/11 hero, said Falun Gong is a great practice

Saleem was a police officer on duty in front of the Chinese consulate. Over the course of three hours, he watched the Falun Gong group sit peacefully, with no noise but the beautiful exercise music.

He said that he has seen a lot of thing during his 25 years of service, yet what he saw this day is truly rare. “This is a great practice,” he said.

Talking to People About Falun Gong Around the City 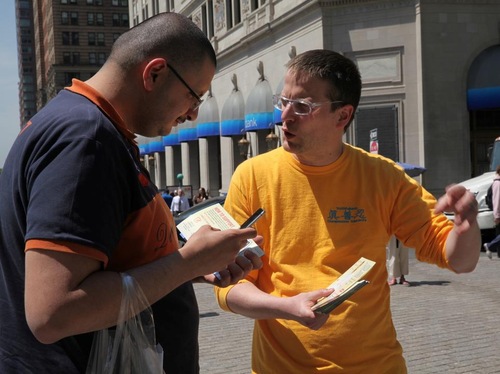 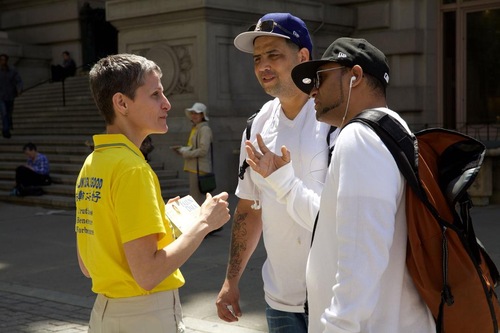 Evan Magaeniten, a financial analyst, saw the Falun Gong event from his office window and wanted to find out what was going on.

He never heard about Falun Gong, but he knew that meditation is good for health. Being persecuted for peacefully meditating is ridiculous, he said.

He was shocked when he learned about the state-sanctioned organ harvesting in China. “This is massacre, and I am strongly against any form of massacre.”

A Chinese couple from Beijing watched practitioners' event at Bowling Green Park for a long time.

“We know clearly about the evil nature of the communist party,” the couple touring in New York said. “We are Christians, and the Party also persecutes Christians, though not as severely as they persecute Falun Gong.”

“The Party has done a lot of evil things, and the heaven will one day punish it.” The couple was happy to have a chance to quit the Party with practitioners' help.

Adil and his mother from India were on vacation in New York. He was attracted to the group exercises in Bowling Green Park. 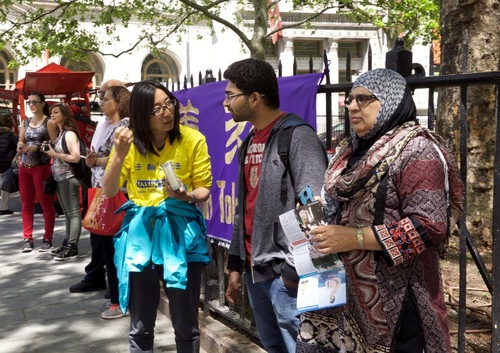 Adil asked practitioners to pose for a photo with him. “These people are full of bright energy. I like the exercises a lot. They make people relax. I will come back to learn them myself.”

“My Experiences at a Quitting the Party Site in Chinatown”

“A Discussion About “Little Issues” in Cultivation”