(Minghui.org) May 13, 2016 is the 17th World Falun Dafa Day and the 24th anniversary of Falun Dafa’s public introduction. It is also the birthday of Falun Gong founder Master Li Hongzhi. Falun Gong (also known as Falun Dafa) practitioners around the world celebrate World Falun Dafa Day every year, and appreciate Master Li for introducing the practice. Presented here are snapshots of celebration events in Denmark and the Czech Republic, and greeting letters from elected officials.

Falun Gong practitioners in Denmark held activities on May 6 and 7 to celebrate the upcoming World Falun Dafa Day. They held a group practice on the coast of Øresund on the morning of May 6. 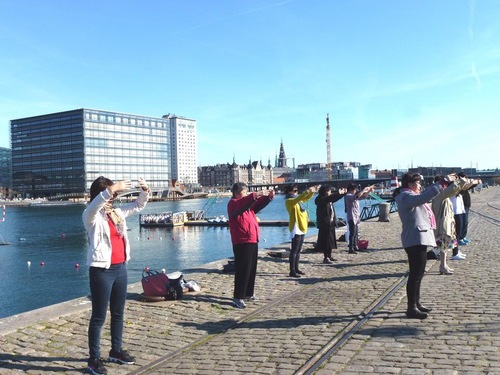 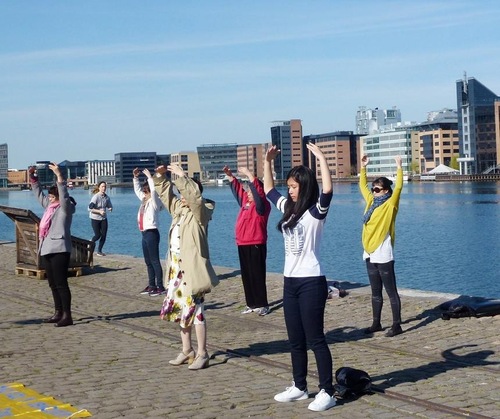 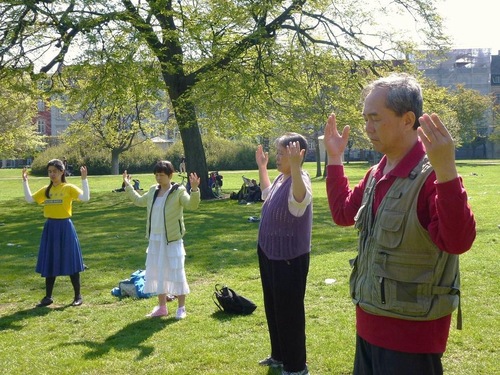 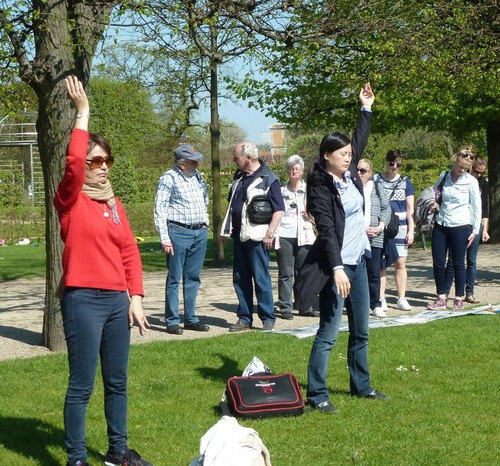 The practitioners held a group exercise practice in Kongeshaven Park on the morning of May 7. Many park visitors paused to watch the exercise demonstration, and read the information poster. Some asked fo more information about Falun Gong, and some took photos. 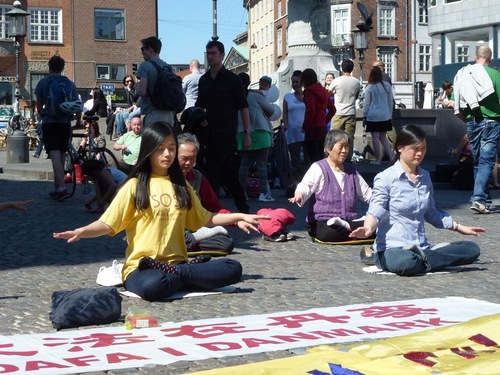 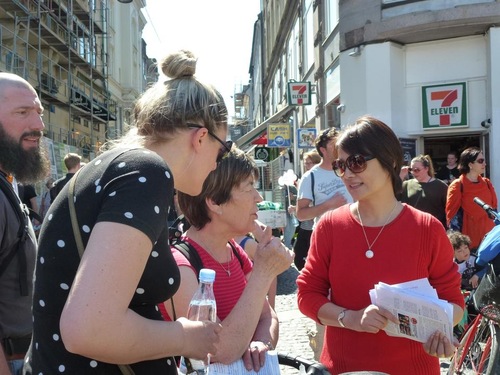 Passersby learn about the persecution from a practitioner (right).

Celebration in the Czech Republic

Falun Gong practitioners in Czech held activities at Prague's Old Town Square on May 13, 2016. They had a group exercise practice, distributed flyers, and talked with passersby. A few young people were excited upon seeing the group practice, and imitated the hand gestures of the practitioners. Some tourists signed the petition calling for an end to the persecution, after becoming aware of the situation in China. Some took photos of the scene. 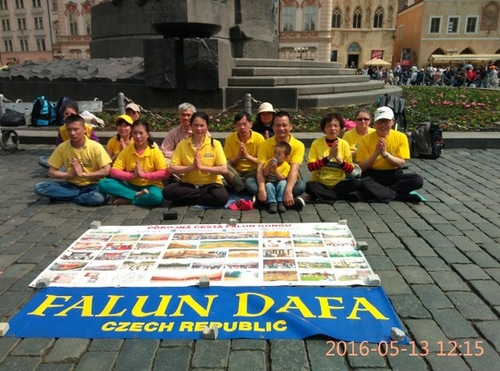 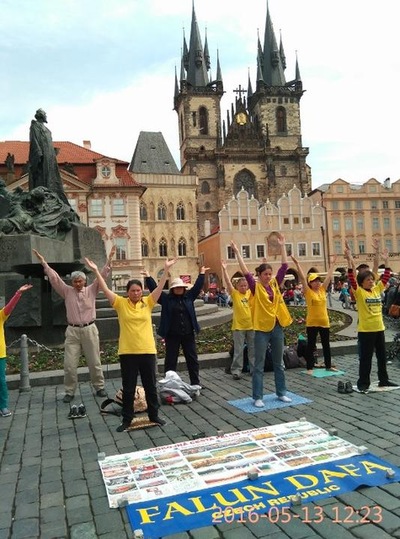 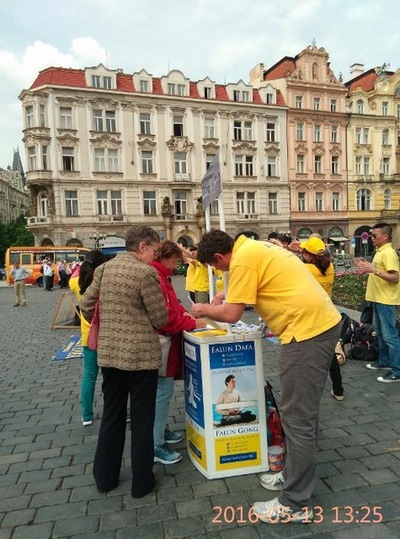 Signing a petition calling for a stop to the persecution. 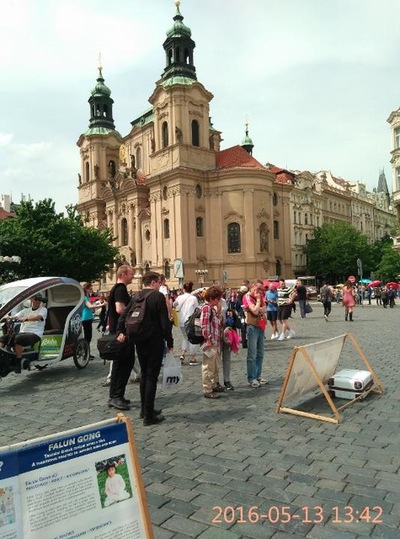 Tourists pause to look at the Falun Gong posters.

Recognition by Elected Officials in Germany

They also praised Falun Gong practitioners for their uncompromising courage while facing the 17-years of persecution. They expressed their best wishes to those practitioners being persecuted in China, and said they believed that the brutal persecution would end. 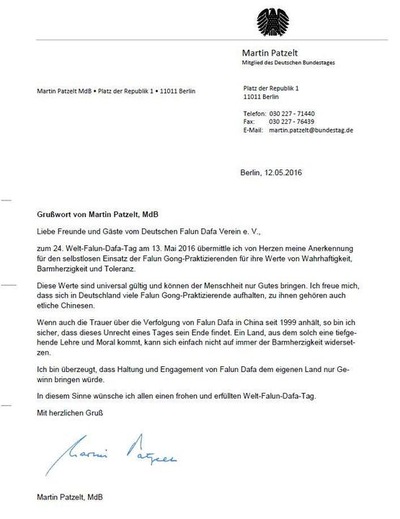 Letter from Martin Patzelt, MP in the German Parliament.

MP Patzelt is a member of human rights committee in the German Parliament. He expressed his admiration of the practitioners' selfless contributions in safeguarding the principles of Truthfulness-Compassion-Forbearance. He stated in his letter, “These are universal values that can bring human fortune.” He noticed that there were many Falun Gong practitioners in Germany. 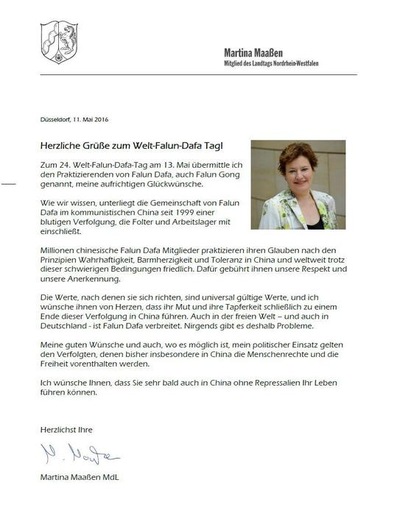 Letter from Martina Maaßen, member of the state parliament of North Rhine-Westphalia, Germany.

Over 100 million people have benefited from practicing Falun Gong during the past 24 years. They have become healthy, and gained understanding of the real meaning of life.

She continued, “I appreciate Master as I find direction in life, and know what is right. Whatever happens, I know that assimilating to Truthfulness-Compassion-Forbearance is always right.” 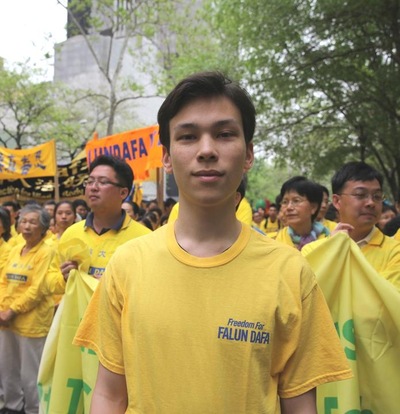 18-year-old Hike Opfermann participates in the rally and grand parade in New York on May 13.

18-year-old Hike Opfermann has practiced Falun Gong following his parents since he was young. He said he truly understood cultivation when he was 16 years old.

He shared, “I was born in an environment of cultivation as my parents practiced Falun Gong. I actively practiced it myself after age 16 as I came to know the true meaning of cultivation.”

As a youth, he was once attracted by electronic games. But he found that he had a bad feeling when playing the games. He said, “I appreciate Master in everything. Such gratitude is beyond words.”