(Minghui.org) A golden Chinese dragon dancing up and down on Union Square in Manhattan on May 12 started the celebration of the 17th World Falun Dafa Day. 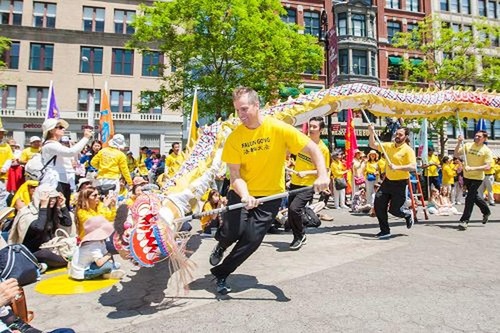 The dragon dance on Union Square

May 13th, the birthday of the founder of Falun Dafa Master Li Hongzhi and the day the practice was introduced to the public, has been designated Falun Dafa Day. Every year at this time, practitioners from all over the world come to New York to celebrate and send happy birthday greetings to Master Li. This year, the number of the attendees reached 9,000.

On Union Square, nearly a thousand practitioners first did the five Falun Gong exercises together. After the dragon dance, they also held music and art performances, showcasing the beauty of Falun Gong and inviting passersby to join the celebration. 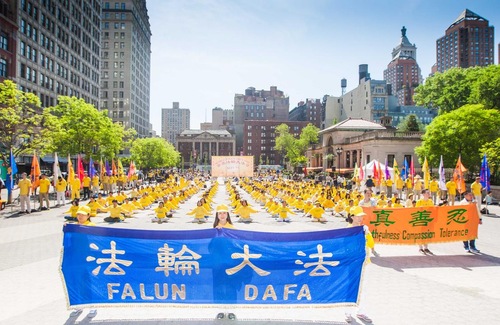 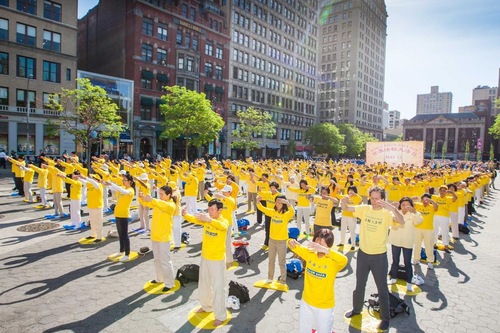 Doing the exercises together on Union Square 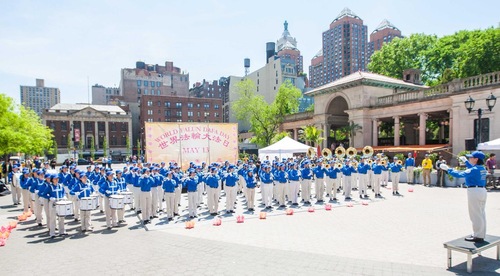 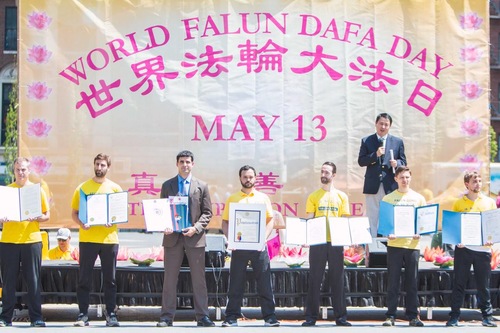 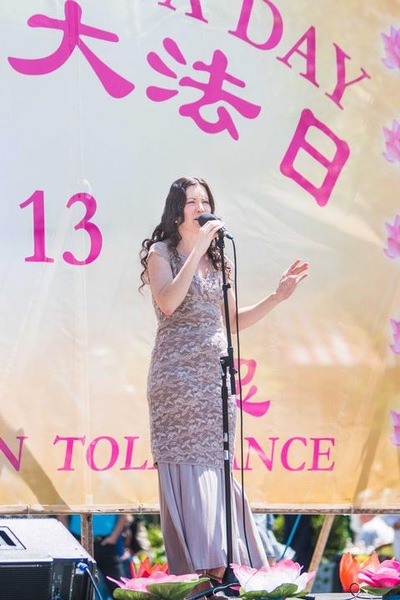 Anna Kokkonen wants to expose the persecution of Falun Gong through her music.

Anna Kokkonen from Finland, 33, performed her song “Golden Land” at the celebration.

She explained that the meaning of the title is two-fold. While it symbolizes the glorious traditional Chinese culture, the color gold is also a reflection of the lights at Falun Gong practitioners' candlelight vigils that commemorate those who were tortured to death during the persecution in China.

“If we stand together, just like the lights at the vigil forming a golden ocean, we will stop the persecution,” she said.

Anna has practiced Falun Gong for 10 years, and she sees the profound changes in herself.

“Being a musician, I used to be emotional and I had a short temper. Practicing Falun Gong has made me peaceful.”

Practicing Falun Gong has also helped her with her performances. Her voice has become brighter and stronger. Last summer, she won first place in a competition held by a Finnish radio station. In the last two years, she has put out two albums.

Witnessing the positive changes in Anna, her parents and husband are very supportive. “They are proud of me for fighting for the Chinese people's human rights,” she said.

Young Practitioner: “I want to be a great cultivator.” 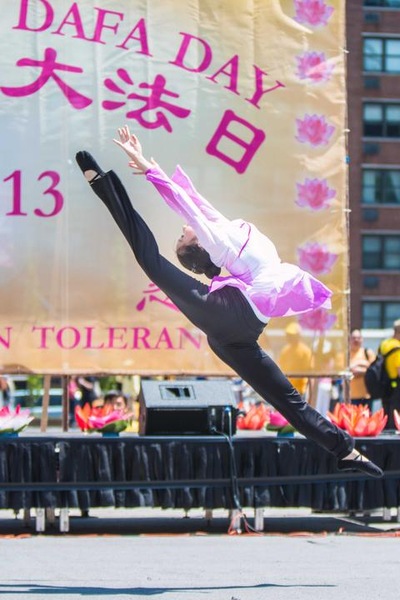 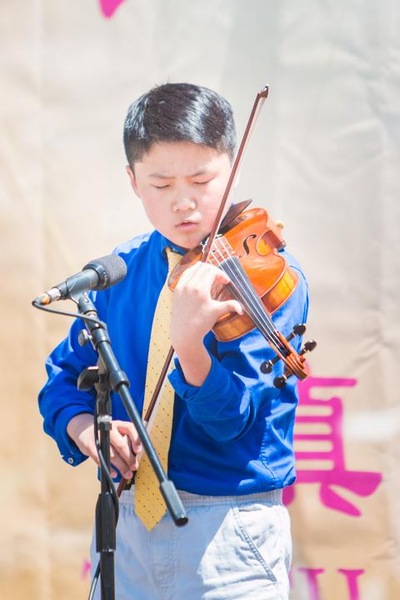 13-year old Li Yuanyuan's violin performance amazed the audience. He has been practicing Falun Gong with his parents since he was very little.

“I have learned a lot from Dafa. When other kids bully me, I know how to hold my temper. I also learned how to get rid of my time-wasting habits. I always try to finish my homework and violin practice before I go out to play. Compared to other kids in my class, I spend a lot of time on the violin, but I end up with more time to sleep because I manage my time well.

“I've seen the difference between my parents and other parents. My parents never yell at me. They are always so peaceful. They always correct my misbehavior calmly.

“I want to be a great cultivator and a great violinist. My dream is to play in the Shen Yun Orchestra. If I cultivate well, I will be a member of Shen Yun.”

Spectators: “This is a good way to let people know about the persecution.”

The spectacular performances attracted many tourists and office workers.

Ms. Xi was arrested in China and imprisoned for a year because she sang this and several other songs composed by Falun Gong practitioners in a park. In the forced labor camp, she was badly tortured. She was glad that, in this free country, she can sing the same song in public for everybody. 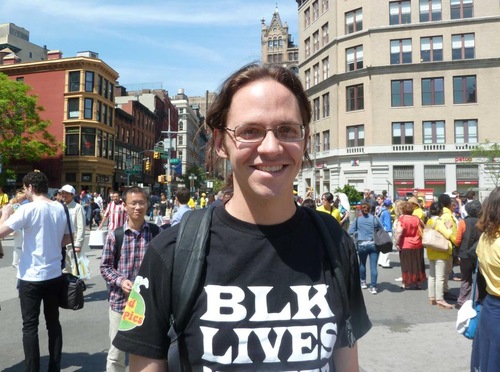 Christopher Young is glad that Ms. Xi and other practitioners can practice their belief unmolested in America.

Christopher, who plays piano and guitar in a band, could not believe it. He had heard about the persecution of Falun Gong 15 years ago. He said that he could not imagine, as an American, how a government could try to control people's thoughts.

Adamantly against the persecution, he said, “They do the sitting meditation, play their instruments, dance, and sing here today. They are so peaceful. Then I heard her story of being jailed and tortured. This is a good way to let people know about the persecution.” 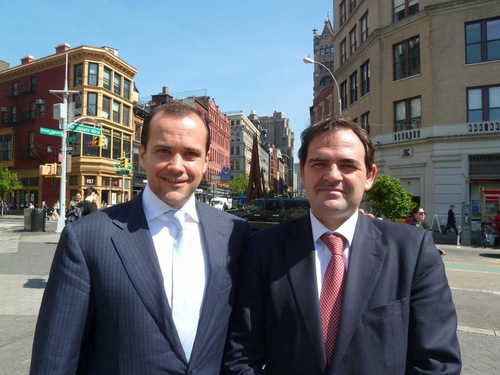 Iliya Zogovic, president of an investment bank, and Enrique Quemada, head of the bank’s international department, stopped by to watch the group exercises for a long time.

The bankers were on the way to an appointment. Mr. Zogovic said, “I felt peace and happiness when I saw their meditation. It is great. They look so relaxed.”

Mr. Quemada likes this event in downtown Manhattan. He felt strong energy radiating from the exercises.

Quemada said, “In this crazy city, everybody is in a rush. Both of us are always on the run. But here, I can feel the relaxing moment. This is a strong contrast.”

Mr. Zogovic emphasized that it is rare to see such a scene in Manhattan, much less on Union Square, where everybody runs. He said that he wanted to look up Falun Gong online. 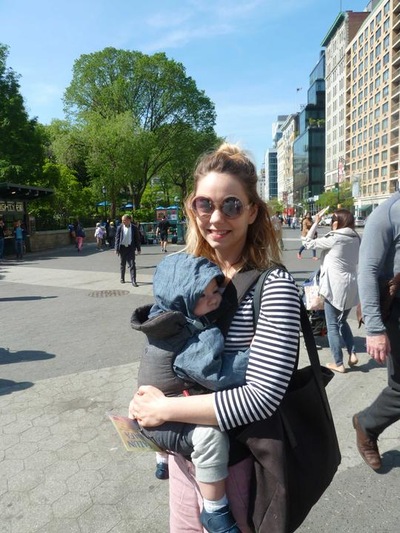 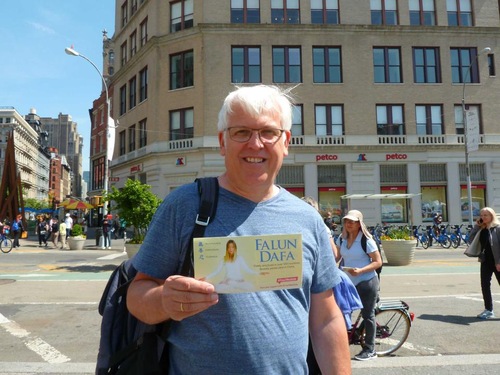 John, a tourist from Belgium, asked a practitioner to take a picture of him holding a Falun Gong flyer. He said he would put it on his personal website to support Falun Gong.