(Minghui.org) Falun Gong practitioners around the world held various events to commemorate the 17th Anniversary of the April 25 Peaceful Protest during the weekend of April 23-24, 2016.

Practitioners held signature drives in Warsaw and Poznan on April 23 and 24. Display boards which exposed the persecution and the forced organ harvesting in China lined a 20-meter walkway in downtown Warsaw. 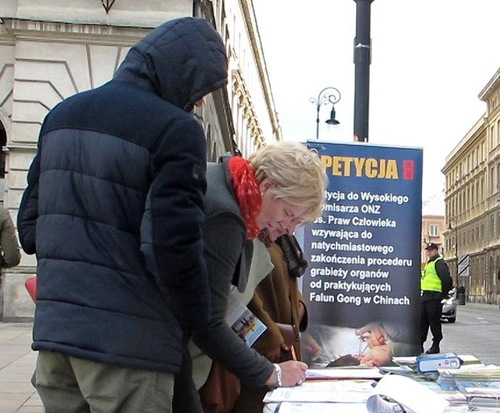 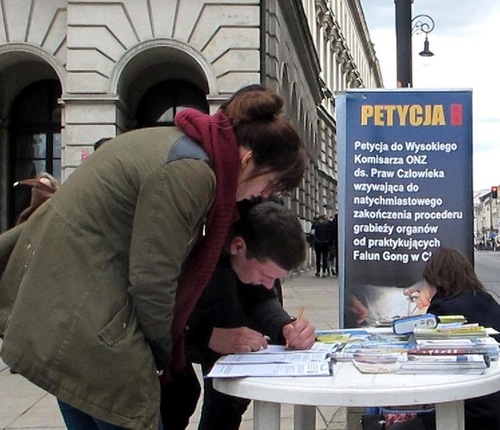 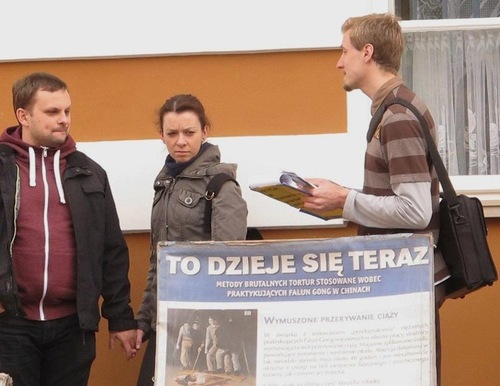 Signature drives in Warsaw and Poznan petitions to end the persecution immediately.

One older Chinese man read the display boards for a long time. He told a practitioner that he was visiting Poland from France, and used to be a technology researcher in China. He said, “I knew the Chinese Communist Party so well that I migrated to France. Falun Gong practitioners are courageous. Even when some of them have their organs forcefully taken (by the CCP), they still believe they can save the world.”

A person from Poland pointed at a flier and said, “(Forced organ harvesting) is no longer a secret. We all know about it. Besides signing my name, what else can I do to help you?”

On the morning of April 24, Falun Dafa practitioners from Gliwice, Lodz, and Warsaw held a peaceful, sitting protest outside the Chinese Embassy. After the protest, they continued the signature drive at a downtown tourist site.

Germany: Sitting Protest at Chinese Embassy in Berlin and Information Day in Nuremberg 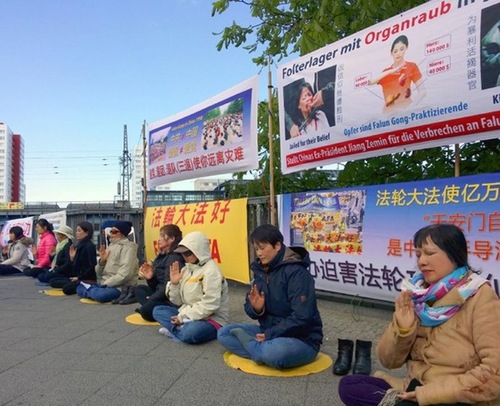 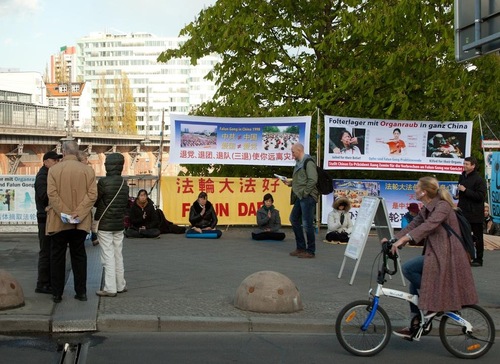 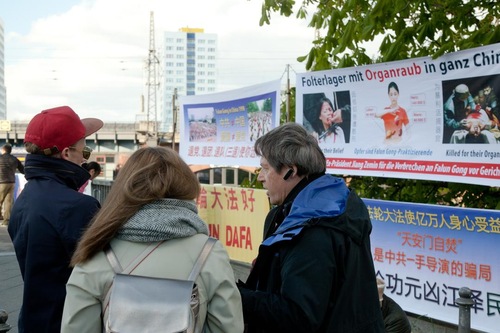 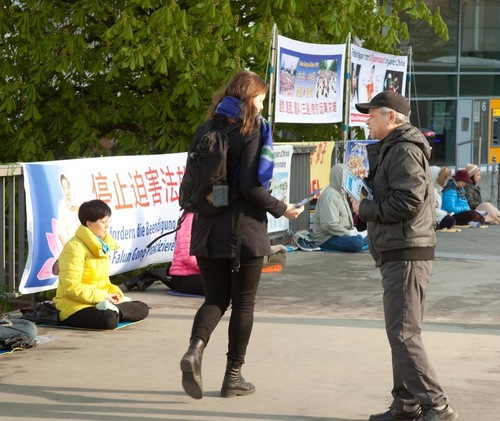 Falun Dafa practitioners protested near the Chinese Embassy in Berlin, requesting that the communist regime stop the persecution.

A group of about ten cyclists jumped off their bikes to get information. They all listened attentively as the practitioners explained the background of the day's demonstration. They were particularly shocked when they heard about the organ harvesting from living practitioners in China. As they left, they pushed their bicycles very slowly past the practitioners who were demonstrating the Falun Gong exercises.

In Nuremberg, practitioners held an information day event on the square near the famous Lorenzkirche (St. Lorenz Church). Even though it rained that day, there were still many Chinese tourists passing by. Many took photos of the display boards descibing the forced organ harvesting crime and the lawsuits against Jiang Zemin, the former dictator who ordered the persecution of Falun Gong. 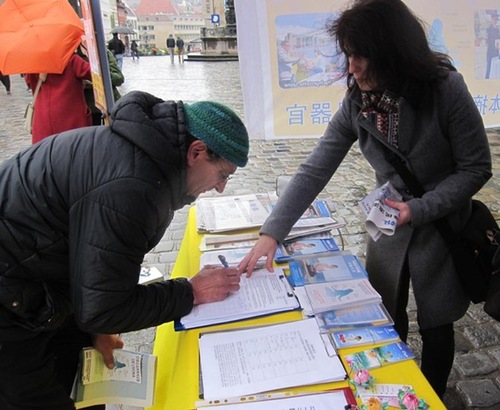 A German signs a petition condemning the forced organ harvesting crimes in China at the information day event in Nuremberg Germany.

Scotland: Protest in Front of Chinese Consulate in Edinburgh

Practitioners protested in front of Chinese Consulate in Edinburgh on April 25 to commemorate the April 25 peaceful protest 17 years prior in Beijing. 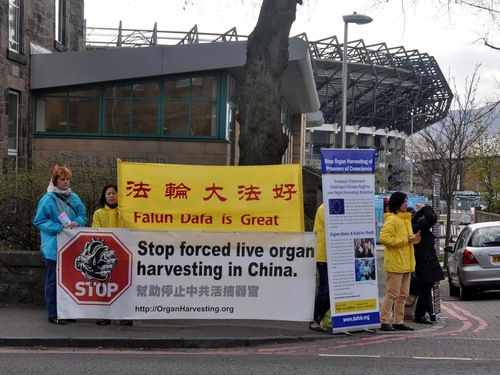 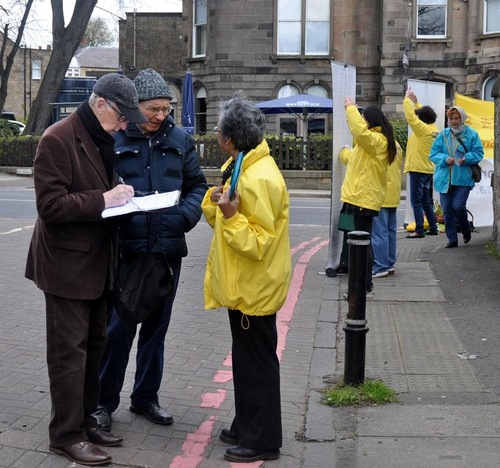 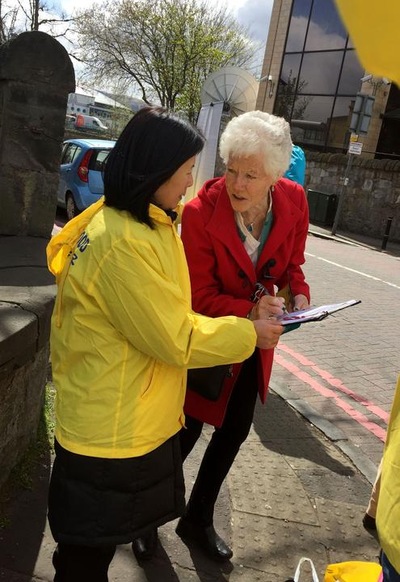 Protest in front of Chinese Consulate in Edinburgh Scotland

A retired Chinese couple walked by the protest site. They took a flier and told a practitioner that they already knew about the organ harvesting crimes in China.

The wife added, “We are happy to meet you here. We met Falun Gong in Japan, and we meet Falun Gong again today. You are doing a great job! Please continue!”

Some practitioners went to University of Michigan's campus in Ann Arbor on April 24. They demonstrated the Falun Gong exercises on the lawn and handpassed out fliers telling people about the persecution of Falun Gong and the organ harvesting crimes in China. 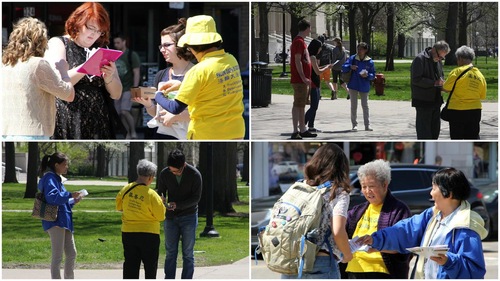 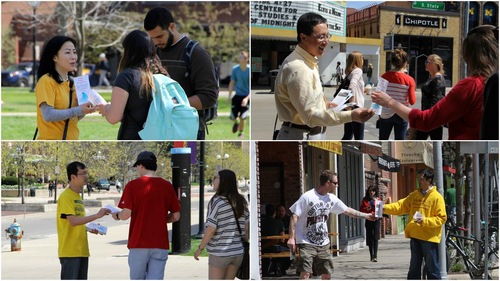 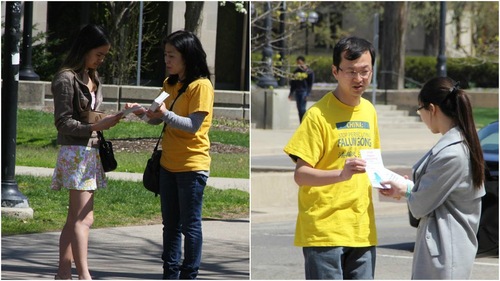 Chinese students learn the facts about the persecution of Falun Gong at the University of Michigan.

There are nearly 2,000 Chinese students at University of Michigan. Some had a chance to hear the facts about the persecution of Falun Gong.

Joyce, an RN, and her boyfriend Oscar, from Indiana State, came to Ann Arbor for a vacation. They watched the practitioners practicing the Falun Gong exercises and read a flier.

Joyce commented, “The Chinese Communist Party's persecution of Falun Gong is wrong. Persecuting a belief is wrong. People should love each other.”