(Minghui.org) Mr. Chang Yan-Kai learned Falun Dafa ten years ago, in his last year of high school. He recalls that the biggest gain he experienced after he became a practitioner was finding the direction and ultimate goal in his life.

Mr. Chang had to make choices frequently in his everyday life. He was used to the less-than-ethical ways of doing things in modern society and on his job. The way things were done were often against the teachings of Falun Dafa. In the beginning, he struggled a lot in the process of making a decision. Eventually he knew more clearly how to make the right choices and take the correct actions by following the Falun Dafa principles of Truthfulness-Compassion-Forbearance. 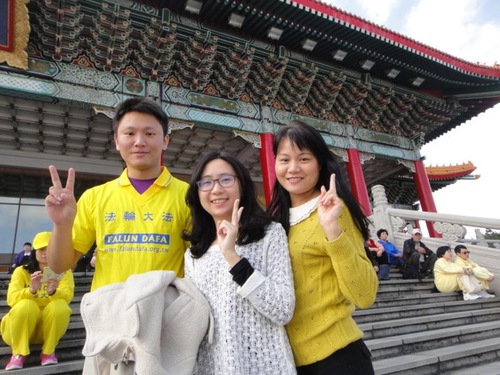 Mr. Chang Yan-Kai (left) with his mother and his wife at the 2015 Falun Dafa Experience Sharing Conference.

At work, Mr. Chang had to make purchases and verify budgets. As a public servant, he had strict rules to follow, and he never took shortcuts just to make things easier.

“For those who practice cultivation among everyday persons, what type of business you are in does not matter. Regardless of how much money you have, how high your position ranks, or what kind of private enterprise or company you run, it makes no difference, as you should trade fairly and maintain a righteous mind. All professions in human society should exist. It is the human heart that is indecent, rather than one’s occupation.” (Zhuan Falun)

One of Mr. Chang's subordinates once said that Mr. Chang was the easiest supervisor he had ever worked with. Mr. Chang said that he was considerate and kind to others because he was taught that “...whatever you do, you should consider others first...” (“Non-Omission in Buddha-Nature” from Essentials for Further Advancement).

He mentioned that sometimes he couldn't study the teachings clear-headedly for a few weeks; as a result, he began to have bad thoughts more frequently and used abusive words toward his subordinates. On the contrary, if he calmly and consistently studied the teachings, he would have a clear idea on how to handle things better, and many conflicts or problems were easily resolved.

Mr. Chang left copies of Zhuan Falun in the library where he worked so that his coworkers could learn about Falun Dafa.

Mr. Chang got married in January this year. In three years of dating, he'd never had a fight with his girlfriend. Last year, his fiancee and his mother went to a Falun Dafa Experience Sharing Conference with him, where they both decided to learn Falun Dafa after meeting with other practitioners. 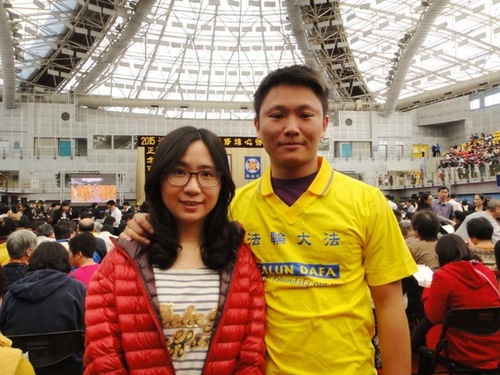 Mr. Chang and his wife

“New Zealand: Rally in Support of 230 Million Who Have Quit the Chinese Communist Party”