Petition to Bring Jiang to Justice Signed by 5,922 in Liaoxi Area

(Minghui.org) Almost 6,000 residents of the Liaoxi area in Liaoning Province have signed a petition to criminally charge Jiang Zemin, the former leader of the Chinese Communist Party (CCP) who initiated the persecution of Falun Gong (also known as Falun Dafa) in July 1999. The long-running persecution has resulted in nearly 4000 practitioners verified as being tortured to death, and hundreds of thousands held in prisons or labor camps. 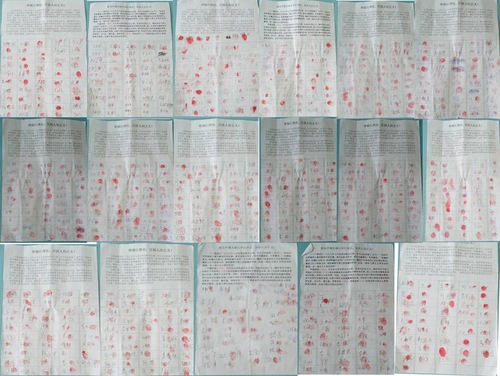 People sign and put their fingerprints on the petition form

Fire on the Mountain

An old man told a practitioner his experience.

He was grazing his sheep on a mountain one day. He was going to burn a small patch of grass to help with the following year's growth, but the fire quickly got out of hand and began to spread.

The man suddenly remembered what a Falun Gong practitioner told him, that whenever he got into problems, to recite 'Falun Dafa is good. Truthfulness-Compassion-Tolerance is good'. So he started shouting these words.

While he was shouting, a whirlwind suddenly appeared, moved towards him and put the fire out. “It was amazing!” he said.

“I do believe Falun Dafa is good,” he added. “Without Dafa's protection the fire would have spread and done a lot of damage. I will use my real name to sign the petition.”

A person said to the practitioner who was asking people to sign the petition at a market: “Jiang Zemin soon will be done for. I watch New Tang Dynasty's television programs from America. I know the inside story, and I support Dafa. Falun Gong practitioners are saving people!”

A practitioner distributed DVDs at a market. The DVDs contained information about the crimes Jiang Zemin committed, and the persecution of Falun Gong and organ harvesting.

The DVDs were soon given out, but one man didn't get one and asked the practitioner to bring one for him the next day.

The practitioner returned to the market the following day and saw that the man was looking around, waiting for him.

The practitioner passed the DVD to the man and he excitedly said: “I admire Falun Gong practitioners. They believe in Truthfulness-Compassion-Tolerance. They are people with great integrity.” He then held up the DVD and shouted: “Falun Dafa is good!”

“My Home Becomes “Our” Home”