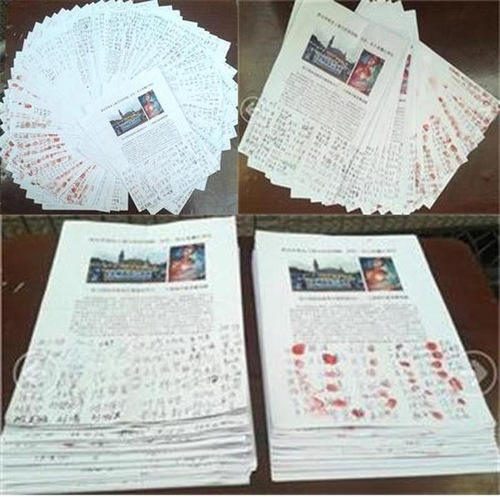 Below are some comments by individuals who signed complaints against Jiang.

“My daughter benefited a great deal after she practiced Falun Gong, but was put in a forced labor camp for distributing Falun Gong informational materials. Her family was destroyed by Jiang Zemin. He must be brought to justice,” said Mr. Xu.

“Jiang Zemin is horrible. He deceived so many people into opposing Falun Gong,” said Ms. Ye.

The “Tiananmen Square self-immolation hoax has deceived so many people. It turned out to be staged,” said Ms. Xu.

“Many people persecuted Falun Gong blindly after being deceived by Jiang Zemin. He is worse than a beast,” said Ms. Xiao.

All four generations of Mr. Xu's family signed a complaint against Jiang Zemin. “The whole society became corrupt under his power. Thieves, bandits, and thugs were everywhere,” said Mr. Xu.

“Practitioners in Our Area Have Not Been Persecuted for Suing Jiang”

“Cultivate Solidly and Do Not Listen to Rumors”