Before he practiced Falun Gong, Mr. Guo was of poor health and had to rely on medication for suppressing his illnesses. His health improved after he started practicing Falun Gong in 1993.

He filed a criminal complaint against Jiang on July 15, 2015 with the Supreme People's Court and the Supreme People's Procuratorate, asking China's highest prosecution office to charge the former Chinese leader for his role in ordering the violent campaign against Falun Gong.

Below are excerpts from Mr. Guo's complaint.

I used to work as a broadcaster with a local TV station and had to take on several roles. This took a toll on my health, and I had to rely on all kinds of medication to keep going.

I started practicing Falun Gong in 1993, after which all my health problems disappeared. I became healthy and full of energy, and my colleagues were amazed by how I could accomplish difficult tasks with ease.

Once, I was asked to do a report on aerial ropeway transportation of timber from high mountains. For a well-researched report, I went on location in the mountains and had to carry over 15 kilograms of equipment. This did not faze me, because I had a lot of energy and could accomplish this task with ease. Even the lumber workers were amazed.

After getting back home, I wrote the report, edited the footage, and did the voice-over. The program was ready to be aired. I needed only three hours of sleep before going to work.

There were many more such examples of when I benefited from practicing Falun Gong.

Jiang launched the persecution of Falun Gong in 1999. His means included framing the cultivation practice and disseminating lies.

This persecution changed my life. I was suspended from work, and my personal freedom was restricted. My home was ransacked, and I was illegally arrested, interrogated, and detained in forced labor camps.

My family was constantly harassed, and my wife's job and my child's schooling were also affected. My family was torn apart. Even today, I still have a only tiny income from a menial job.

In the Fall of 2000, I went to Beijing to appeal for the right to practice Falun Gong. I was arrested and taken to a place where they were already holding a thousand practitioners.

At dusk, we were taken to different places by bus. I was taken to a big detention center and locked up with drug smugglers and murderers. It was rather cold at night, and I was given no bedding. I went on a hunger strike for 10 days to protest the unlawful treatment.

I was transferred to the Jilin City liaison office located in Beijing, where I was detained for a week before being escorted back to Jilin. I was held in a detention center for a month and then taken directly to the Jilin City Forced Labor Camp.

I was tortured with the “death bed” for doing the Falun Gong exercises. I went on a hunger strike and was force-fed with highly concentrated salt water and flour porridge. They punched and kicked me, beat me with spiked batons, and shocked me with electric batons. 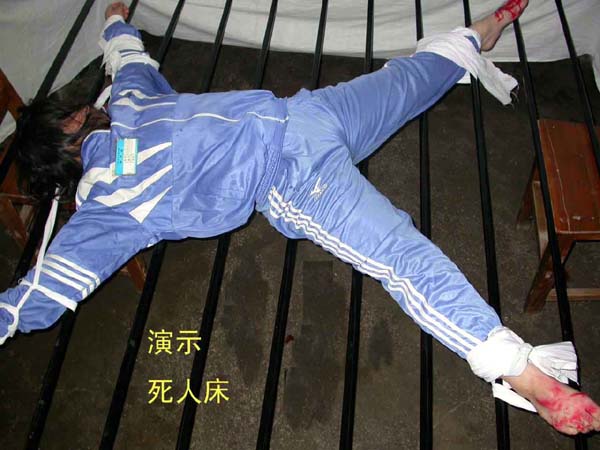 During the day, we were forced to sit on a big wooden board and recite prison regulations. About 70 people were held in one large cell. We had to share one mug and were given only one bucket of water a day. The daily food consisted of spoiled cornflour buns and a dirty thin soup with pieces of old turnips and potatoes.

The sleeping arrangements were bed boards, which were still damp, as they were made from newly felled timber. Many developed scabies, and our bedding and clothes were infested with lice.

In the winter, we were also forced to run on the sports ground in thin clothes.

While eating breakfast, a guard called a list of names. These people, including me, were immediately handcuffed and taken to buses.

After we arrived at some location, we were body-searched. I heard the typical sound and inhaled the typical smell from electric batons, and heard painful screams from a nearby room.

Then, Sun, the middle-aged division leader, arrived. He rolled up his sleeves and said, “We have two kinds of treatments for you. If you cooperate with us, you can have some noodles and get some sleep. Otherwise, something else awaits you.”

While he was talking, a police officer said quietly to us, “Don't blame us. We have to follow orders from the old guy [referring to Jiang Zemin]. If you hold any grudge, blame him.”

I was released on July 25, 2001. By then, I had lost my job, and had to do odd jobs to make ends meet. At the same time, I was still monitored by police officers and forced to report my whereabouts.

As soon as I returned home just before April 2000, after I finished a media job in Jilin, about five plainclothes officers arrived and ransacked my home. They found a few Falun Gong books; to create “evidence,” they pulled the books apart and laid out the single pages to video-record them. They then arrested me for possessing “a large amount of Falun Gong materials.”

Practitioners were either forced to sit on “small stools” all day long and recite prison regulations, or perform forced labor, including carrying soil for earthwork, repairing roads, removing bricks, pulling out nails from building planks, harvesting corncobs, and so on.

After some time, my health started to deteriorate. When I was released, my legs were as thin as sticks, and I could not even walk properly. I was diagnosed with severe hepatitis B.

Thanks to Falun Gong, I regained good health again over time.