(Minghui.org) Today's news from China includes incidents of persecution that took place in 9 cities or counties in 5 provinces. According to this report, 4 Falun Gong practitioners were subjected to mistreatment during their detention, and at least 21 were illegally arrested. Two practitioners seeking to mail letters of complaint regarding Jiang Zemin to the Supreme People's Procuratorate and the Supreme Court have met with obstacles. 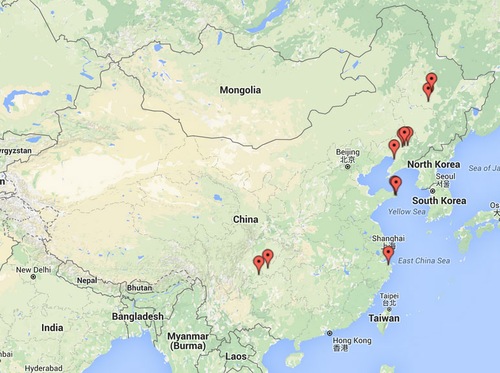 While detained at Shenbei Detention Center, he once vomited blood and was taken to hospital for treatment.

Mr. Luo was sentenced to a three-year prison term by the Shenbei District Court on January 25, 2016.

Mr. Li Xiaoming, sentenced to a three-year prison term at the end of 2015, was taken to Dongling Prison in Shenyang City in early 2016.

Ms. Luo Lingrong, in her 60s, sentenced to a three-year prison term in September 2015, was taken to Longquan Women's Prison in early 2016.

Mr. He Xiaobo was arrested on February 17, 2016, when he went to the Ningbo City Procuratorate. His whereabouts are unknown.

Seven practitioners including Ms. Sun Fengxia and Ms. Zhang Yawen were arrested at Ms. Sun's home by officers from the Jianzhu Police Station on February 17, 2016.

Ms. Yu Zhongshu, in her 60s, was arrested by officers from the Qijiang District 610 Office on February 19, 2016, for suing Jiang Zemin. She was taken to the Shihaokuang Guest House and subjected to brainwashing. She was forced to watch propaganda that slandered Falun Gong and pressured to write the three statements. Ms. Yu was released two days later.

Ms. Li Cuihong, Ms. Wang Hong, Ms. Liu Shukun, and Ms. Zhang Ying were arrested by plainclothes officers on February 20, 2016, for distributing informational materials about the persecution of Falun Gong. They were taken to the Gongnong Police Station in Wanhua District and then transferred to the Nangou Detention Center the next day.

Several practitioners including Ms. Wang Fengyu were arrested and taken to the Wanglian Police Station on February 21, 2016.

Four practitioners including Ms. Cai Ling were arrested on February 18, 2016, for talking to people about the persecution of Falun Gong. Two were released that afternoon but their homes were ransacked. Ms. Cai and one other practitioner are still detained.

Mr. Chen Yan was arrested at home by officers from the Dengshibao Town Police Station on February 19, 2016.

Ms. Li Guirong, her husband and son were arrested at home by two dozen officers on February 13, 2016. The police ransacked her home. Ms. Li and her son are detained at the Suihua City Detention Center and her husband is detained at a detention house.

“The Virtue of Forgiveness and Generosity”