(Minghui.org) The Art of Zhen Shan Ren (Truthfulness-Compassion-Forbearance) International Exhibition revisited the University of British Columbia for a third time from February 29 to March 4, 2016. 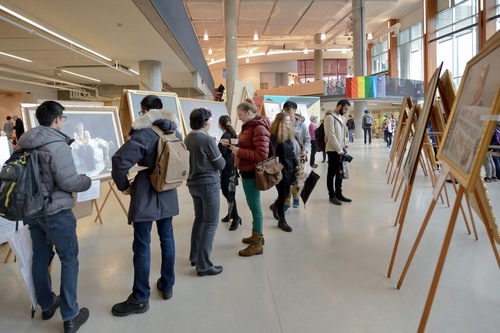 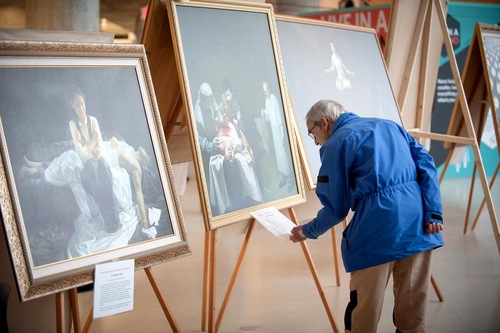 A visitor reads the background description for the painting Organ Crimes by Xiqing Dong.

In addition to teachers and students of the university, many visitors were tourists, and some visitors came at the recommendation of their friends. The exhibition also attracted the university's radio station, which now plans to put together a special segment on Falun Gong (also known as Falun Dafa).

“Such persecution should not have happened to anyone. I can understand their (persecuted Falun Gong practitioners) pain and suffering,” a visitor (Jaruuh) wrote in the guest book. He said that he happened to walk into the exhibition hall, and what he saw moved him to tears.

Another visitor, Giononns, wrote that the exhibition filled his heart with sympathy. He was impressed by Falun Gong and Chinese people who have steadfastly endured persecution. He wrote that he could tell that the artists put their best effort into their paintings, and that he was grateful to the artists for transmitting the voices of the persecuted group in China to the world in such a perfect way.

Many visitors shed tears while viewing the paintings, and expressed outrage when learning about the forced organ harvesting from living Falun Gong practitioners by the Chinese Communist Party (CCP) in China. Many people signed a petition calling for an end to this atrocity. 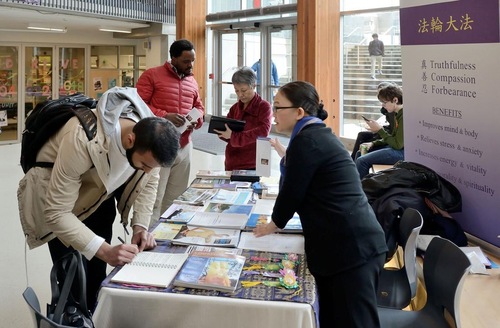 “It's shocking and unheard of,” visitor Maria wrote in her message. She said that it was hard for her to believe that such a horrible thing is happening in China.

Many overseas Chinese students in the university carefully viewed the paintings. Some said that they had learned about the persecution when they were back in China, but they did not know it is so severe. After they learned abut the staged self-immolation at Tiananmen Square and the state-sanctioned forced organ harvesting crimes, many of them took a stance by renouncing their memberships in Chinese Communist Party organizations.

An Iranian student told the volunteer curator that he had been very depressed recently, but the inspiring pieces in the exhibition lifted his spirits.

Another visitor Taryn wrote in the guest book that the paintings are absolutely amazing. Each piece deeply touched his heart, he wrote. He was impressed by the strength and upright faith the works portrayed. He believed that everyone can benefit from this belief that values compassion.

Many visitors said that they wanted to learn Falun Gong.