(Minghui.org) With a master's degree in law, and working as a judge, Huang Weiming is known to be strong-minded and eloquent. That often makes it difficult for others, including his younger brother Xiaowei, to influence his point of view.

But seeing the positive impact that practicing Falun Dafa had on Xiaowei, who graduated with a master's degree in civil engineering, Weiming became curious. He started to read Falun Dafa books and also became a practitioner. 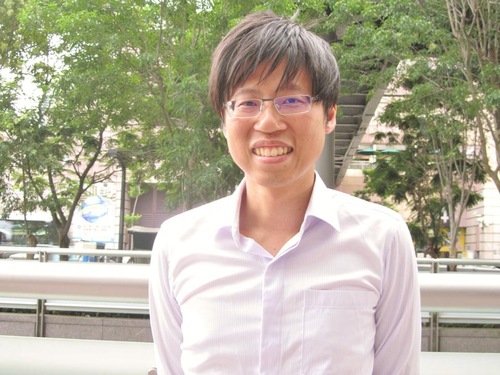 Judge Huang Weiming is known to be strong-minded and eloquent.

“It is Falun Dafa that gives us health and wisdom,” said Weiming.

It was a long road that brought Xiaowei to Falun Dafa.

One night when he was in fourth grade, he felt something pressing on him, making him hardly able to move. This repeated many times after that, both day and night, but he was unable to get rid of it.

Xiaowei's parents took him to doctors and temples all over Taiwan, searching desperately for a cure. As Xiaowei traveled with his parents to yet another temple, he began to think about the purpose of life. But he did not find any answers or a cure.

His ordeal continued until one day when he was in tenth grade. His father brought home a book, Zhuan Falun.

Xiaowei began to read Zhuan Falun and got very excited, “I could tell that this book was teaching me the purpose of life—something I did not find anywhere else. To me, that is the hope for the future.”

One night, Xiaowei felt something was pressing on him again. Because he had been reading Zhuan Falun earlier that day, Xiaowei recited a few passages that he was able to recall. Instantly, the sensation of something pressing on him disappeared and he felt relieved. He was amazed by the power of Falun Dafa.

That night, he slept very well, something he had not done for many years. And those frightening episodes never recurred. 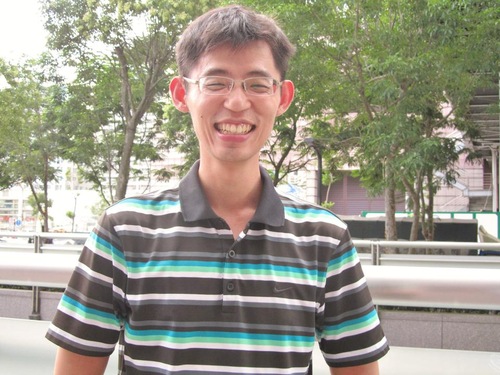 Xiaowei says he became a happier person once he found the purpose of life.

The practice of Falun Dafa was also great help when it came to Xiaowei's coursework. He was admitted to the National Chiayi University and graduated with the highest score in his department. Because of his academic excellence, he was admitted to several renowned institutes without taking an entrance exam. He and other students started a club to introduce Falun Dafa to others on the campus.

After graduating with a master's degree, Xiaowei took the qualification exam for government employees. Although he only prepared about two or three hours for the exam, he did very well on it, and now works as an engineer for the Taipei city government. 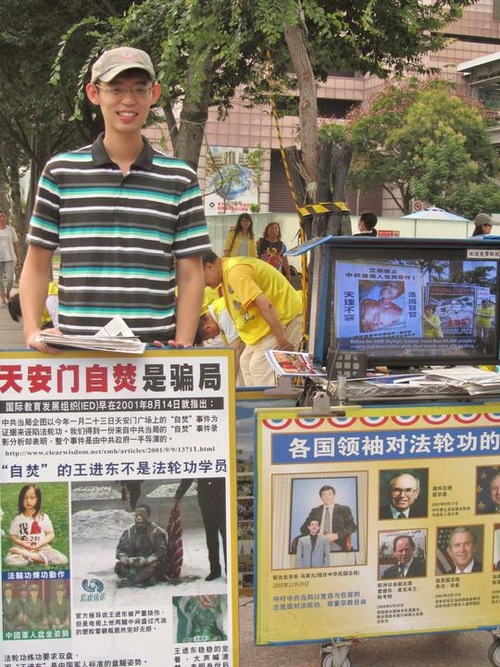 Xiaowei often goes to tourist sites after work to talk to people Falun Dafa and the persecution in China.

Weiming, who is two years older than Xiaowei, had worried about his brother's unusual condition while they were growing up. He was glad to to see the positive changes in Xiaowei, and they often talked about Falun Dafa.

Although he was strong-minded and tended to be critical, Weiming found Falun Dafa to be beyond reproach. “I had to admit that Falun Dafa was really beneficial,” he said. Nonetheless, he still did not start to practice.

Near the end of his graduate studies in 2010, when Weiming was planning to take the qualification exams for government officials, his father again encouraged him to read Zhuan Falun. This time, Weiming agreed. Within days, he experienced many of the things described in the book, and his physical improvement was dramatic.

As the exam approached, Weiming continued to read the Falun Dafa books as usual. In the past, he would have put everything else aside to focus solely on preparing for the exam. But he knew the Falun Dafa books made him calmer and more efficient, didn't interfere with his studies, and even helped. Things went well and he passed all the tests required to be a judge.

Cherishing their freedom in Taiwan, the brothers are deeply concerned for their counterparts in mainland China, who suffer relentless and brutal persecution. “We know good is rewarded with good, and evil meets evil. We hope judges and other officials in China will listen to their conscience and stop persecuting Falun Dafa,” he said.

“Break Through Notions to Submit an Article to Minghui”