(Minghui.org) Today's news from China includes incidents of persecution that took place in 16 cities or counties in 10 provinces. According to this report, 4 Falun Gong practitioner were subjected to mistreatment during their detention, and at least 41 practitioners were illegally arrested. 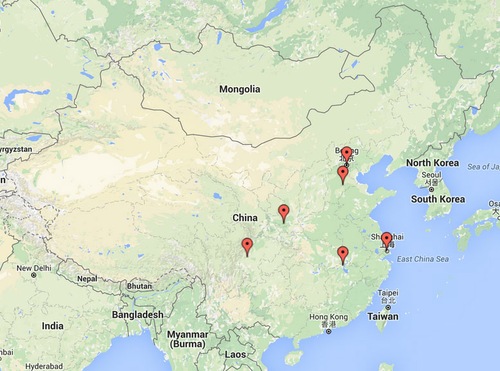 Ms. Li Qizhen was sentenced to six years in prison for talking to people about Falun Gong. She is being held in Tangshan Prison.

Ms. Xiao Chunhong was arrested on January 18, 2016. She is now in the Lianhu Detention Center in Xi'an City.

Ms. Zhang Daidi, Ms. Liu Shaohua, and Ms. Liu Xiaoci were arrested by officers from the Shuishang Police Station when they were talking to people about Falun Gong on February 10, 2016. Ms. Zhang was taken to the Yujiahe Detention Center the following day and held for for seven days.

Mr. Zheng Bin was arrested on February 21, 2016. He is now in the Xindu Detention Center. He has been threatened and severely beaten by the guards.

Ms. Shi Yajuan, Ms. Shi Meijun, and Mr. Zhou Mao from the Huangpu District were studying the Falun Gong teachings in Mr. Zhou's home on the morning of February 4, 2016. The Party secretary and the neighborhood security office director, both from the local residential committee, along with officers from the Huaihai Police Station, forced their way into Mr. Zhou's home. The officers arrested the three practitioners and took them to a detention center.

Prior to his latest arrest, Mr. Liu has been arrested four times over the years and subjected to various forms of abuse for refusing to renounce his faith in Falun Gong.

He was arrested the first time in September 1999 and held for seven days.

His second arrest took place on June 14, 2000, when his wife and daughter were seized at the same time. The women were released a day later, but he was detained for two months.

Mr. Liu was sentenced to seven years in prison following his third arrest on July 31, 2001. His wife, who was arrested with him, was given three years of forced labor. While imprisoned, Mr. Liu was forced to do hard labor without pay.

During the last ten months of his detention, he was held in solitary confinement and deprived of all communication with the outside world. He was also forced to take unknown pills. By the time he was released on July 31, 2008, he was reduced to just skin and bones and in dire health. He recovered in two months after resuming his practice of Falun Gong exercises.

Both Mr. Liu and his wife were arrested again on October 10, 2010. His wife was sentenced to a four-year term, and he was released on bail due to his poor health. When he learned that the court had sentenced him to 4.5 years, he left home to avoid arrest. However, he was arrested again last November.

Ms. Zhang Yun was sentenced to 3.5 years in November 2013, for refusing to give up her faith in Falun Gong. She has been subjected to intensive brainwashing and physical abuse since being transfered to Division 13 of the Hebei Province Women's Prison.

Like other detained Falun Gong practitioners, Ms. Zhang has been monitored around the clock by assigned inmates, and ordered to read materials that slander Falun Gong from morning to night. She has refused to give up her faith, but the guards forced her fingerprints on prepared statements that denounced Falun Gong.

In addition to brainwashing sessions, the former employee of Luquan Prison was also subjected to various forms of abuse. The guards often cursed her and refused to allow anyone to visit her. She was not even allowed to take a shower for several months in a row.

Ms. Zhang is now in a poor health.

More than 1,500 Laixi residents have filed criminal complaints against or reported on the crimes committed by Jiang Zemin, since May 2015. They hold the former Chinese dictator responsible for initiating the persecution of Falun Gong that caused irreparable harm to practitioners and non-practitioners alike.

Many have shared how they woke up to the lies fabricated by the government against Falun Gong. After witnessing how local practitioners abide by the principles of Truthfulness-Compassion-Forbearance, they realized that what was depicted on TV could not be further from the truth.

They demand that the highest court in China bring Jiang to justice for the crimes he committed against Falun Gong practitioners.

A local resident recently submitted an appeal letter to the Pingjiang County Procuratorate seeking justice for her husband, who is facing charges for suing former Chinese dictator Jiang Zemin.

Mr. Yang Daowen was arrested on September 17, 2015, after filing a lawsuit against Jiang for launching the persecution of Falun Gong that led to his repeated arrests.

In particular, he was twice given forced labor, in 2001 and 2007. During a home raid on August 4, 2006, the police confiscated 13,800 yuan in cash and a certificate of deposit worth 60,000 yuan. His wife Ms. Jiang Xianyan indicated in her appeal letter that the police never returned their money.

Not long after his latest arrest, Mr. Yang's eardrum was ruptured as a result of torture. He is currently being held in the Linxiang City Detention Center.

Two private homes in the same residential area in the Tongzhou District were broken into around the same time on January 21, 2016. The local police arrested a total of 21 residents from the two homes.

All of the arrested residents are Falun Gong practitioners, and many of them have been repeatedly arrested in the past for refusing to renounce their faith.

Bao Shoushi broke his leg jumping out of a third-floor window in an attempt to escape arrest. Ms. Zhang Lixin shouted “Falun Dafa is good,” and was knocked down. The police stomped on and injured her face.

In addition to the above two practitioners, the following people were also taken into police custody:

The police did not inform the practitioners' families of their arrests. While a few families were able to locate their loved ones, the whereabouts of the other practitioners remain to be investigated.

A married couple was each sentenced to seven-year prison terms on January 25 of this year, for exposing the persecution of Falun Gong. The judge waited until a day before the appeal deadline to notify the couple's lawyer, essentially rendering them no time to file an appeal.

Mr. Sun Yi and his wife Ms. Yu Guanghua were arrested on April 18, 2015, and tried on December 23. The trial was just going through the motions, as the judge openly deferred to officials from the local Political and Legal Affairs Committee in carrying out the hearing.

On June 19, 2015, Liangzhou District Court sentenced ten locals to prison, one year after their arrests for refusing to give up their belief in Falun Gong.

The practitioners who were released must report to the court twice per month or risk being put into prison.

Four locals were arrested just a few days before the Chinese New Year, for distributing informational materials about the persecution of Falun Gong.

Ms. Bai Xiuyun and Ms. Zhang Shaolian, both from Yingzi Village, were seized by police on January 31. A day later, Ms. Fu Haiyan and another practitioner went missing, and their families later learned that they had been arrested.

All four women are now in Pingzhuang Detention Center in the Yuanbaoshan District.

Mr. Yuan Shaohua, who is serving four years, still suffers from hypertension but has received no proper medical treatment. When his wife visited him on February 2 of this year, she was only allowed 13 minutes to talk to him, even though the standard visitation time is 20 minutes.

Mr. Yang Naijian's family visited him on the same day. He is serving six years for refusing to renounce his faith. His family noted that he appeared emaciated, and learned that he suffered from hypertension just like Mr. Yuan. The meeting was also cut short, to less than 15 minutes.

Because the guards were present at both practitioners' family visits, they didn't dare say much, for fear of retaliation from the guards.

Ms. Pan Changzhao was sentenced to a four-year prison term on January 27, 2016, for refusing to give up her belief in Falun Gong. She filed her appeal on February 6, and asked to be acquitted, saying she had broken no laws by exercising her right to freedom of belief.

The 74-year-old was tried on December 16, 2015, along with two other Falun Gong practitioners. She remains released on bail due to her health.

Ms. Chen Changying was arrested on October 24, 2015, and is now in Jiulongpo District Detention Center in Chongqing. Her arrest has been formally approved, which means that she will likely be tried for practicing Falun Gong.

Prior to this latest arrest, Ms. Chen had been sent to forced labor camps three times, for refusing to renounce her faith. She endured all kinds of torture during her four years in the camps.