(Minghui.org) Today's news from China includes incidents of persecution that took place in 16 cities or counties in 10 provinces. According to this report, 15 Falun Gong practitioners were subjected to mistreatment during their detention, and at least 26 were illegally arrested. 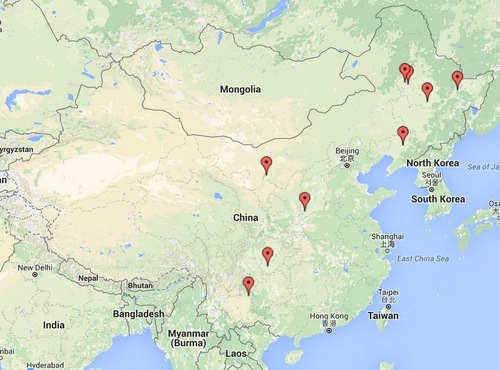 Ms. Shi Yinxue was arrested on June 6, 2015, for distributing informational materials about the persecution of Falun Gong. She was recently sentenced to a three-year prison term and sent to a prison.

Her husband, Mr. Ji Baoshan, died as a result of the persecution five years ago. Mr. Ji Baohai, Ms. Shi's brother-in-law, and his wife were forced to leave home for over ten years due to the persecution. Their whereabouts are unknown.

Ms. Shi's mother-in-law, in her 70s, is left at home without any one to look after her.

Ms. Li Zhixiang was arrested by officers from Chaoyangjie Police Station on July 29, 2015. She has been detained at Shizuishan City No. 1 Detention Center. She was recently sentenced.

Mr. Dong Daoshun and another male practitioner were followed and arrested by officers from Qiqihar City Domestic Security Division on February 2, 2016. They were taken to Wenhualu Police Station.

While in custody there, Mr. Dong was severely punched and kicked by two officers. They also pinched his throat. As a result, Mr. Dong has difficulty eating, drinking and talking. He and another practitioner are still detained at a detention center.

Ms. Xi Ying was arrested by officers from Jianhua Police Department on February 5, 2016. The police ransacked her home.

The next day she was taken back to Xuanwei City and the police ransacked her home.

She was taken to Xuanwei City Domestic Security Division on January 10, 2016. She is now detained at Xuanwei Detention Center.

Ms. Zhang Ping, 46, was arrested in early January 2016. Her whereabouts are unknown.

Mr. Chou Fenghua was arrested by officers, including Wang Longyan from Wenxi County Domestic Security Division, on January 21, 2016. He was detained at Yanhu District Detention Center for ten days.

Ms. Ren Xuying, 41, was arrested at home on February 3, 2016, for suing the former Chinese dictator, Jiang Zemin. The police ransacked her home. She has been detained at Qijiang Detention Center for 15 days.

Ms. Zhao Liying, who is serving three years for practicing Falun Gong, refused to participate in the prison's brainwashing sessions. Xiao Mei, Zhao Pengcheng and Kang Jianwei ordered four inmates to beat her. They slammed her head against the wall. Her head bled and she had bruises all over her body. Despite her injuries, she kept shouting "Stop persecution Falun Gong!" The guards had to give up their attempt to make her renounce her faith.

Ms. Zhai Cuixia is serving four years for practicing Falun Gong. Guard Kang Jianwei knocked her down and stepped on her face with his leather shoes. He also ordered inmates to pour cold water all over her body before dragging her outside to be exposed to the cold.

An elderly practitioner was also brutally tortured. Kang Jianwei grabbed her hair and knocked her head against the wall. A portion of her scalp and a chunk of her hair came out as a result.

Ms. Wang Ying had been on a hunger strike for nearly a year and was force fed on many occasions. The guards fed her unknown liquids.

Ms. Duan Xueqin was beaten to the point of being unable to take care of herself.

A felon convicted of robbery turned into a better person after encountering Falun Gong in prison, but he was tortured for refusing to give up the life-changing practice.

Mr. Wei Yanjie is from Jia County, Henan Province. While serving 15 years in Zhengzhou Prison, he met Mr. Li Baoxing, a Falun Gong practitioner sentenced to 15 years for refusing to give up his belief.

From Mr. Li, Mr. Wei learned to do Falun Gong exercises and recite Falun Gong teachings. The guards, however, resorted to various means in their attempt to stop Mr. Wei from practicing Falun Gong.

They often punished Mr. Wei in private, since they didn't want other inmates to find out his practice of Falun Gong. Division Head Zhao Hongjie and guard Li Xu once shocked him with several batons at the same time.

The guards also tried to use his family as leverage against him, but they again failed to make him waver in his faith.

Most recently, the guards put Mr. Wei in solitary confinement after he refused to do hard labor. The prison has been steadily increasing inmates' workloads in recent months. Practitioners and non-practitioners alike were often forced to work till 11 at night. Mr. Wei's family is extremely concerned about his situation and they call for kindhearted people to pay attention to his plight.

Ms. Sun Jinjun and Ms. Liu Yawen were each given three years, and both have filed appeals against their verdict.

Fu Gui, Li Runtian, Long Bingfeng, Sun Pinghua, and a practitioner surnamed Yan were all arrested while on their way to work on September 22, 2015. Their families were denied visits until early this year. Fu Gui's family has hired a lawyer to fight for his innocence.

Three locals from Luoshui Town were arrested on January 16 of this year while distributing materials exposing the persecution of Falun Gong.

The three women refused to disclose their names and were brutally beaten by the police.

The police eventually discovered the identities of Ms. Zheng Shunrong's and Ms. Chen Yangbi after body searching them and confiscating their IDs. The third practitioner did not have any ID with her so the police weren't able to find out who she was.

All three women were given 15 days of detention, with Ms. Zheng and the third practitioner released on January 31, and Ms. Chen transferred to Deyang City Police Department.

Ms. Chen's family learned on February 3 that Ms. Chen had been formally arrested, which means she now likely faces trial for refusing to give up her faith. They hired a lawyer to defend her.

Ms. Su Huaizhen, 62, was arrested around January 20, 2016 for practicing Falun Gong. She is currently held at Fusheng Detention Center.

Just a few months back, Ms. Su was arrested on September 9, 2015. The police released her that night, only to re-arrest her the very next day. They injected her with unknown drugs, and tried to get her admitted to local detention center and labor camp. Both facilities declined to accept Ms. Su, citing her poor health. The police had no alternative but to release her later that day. They took her back into custody again this January.

Two locals from Ninghe District were tried on January 26, 2016 for practicing Falun Gong.

Ms. Chen Yuanhua, 67, and Ms. Yang Fujing, 57, were arrested on August 26 last year. Prior to their latest arrest, they had been repeatedly detained in the past for refusing to renounce their faith in Falun Gong.

The two practitioners' lawyers, both from Beijing, defended their innocence. Both Mr. Liang Xiaojun and Mr. Guo Haiyue emphasized that there has never been any law that criminalizes Falun Gong in the first place; hence the persecution is illegal from the onset.

The lawyers also pointed out that it is their clients' constitutional right to freedom of belief. Ms. Chen and Ms. Yang caused no harm to any individual or society at large by practicing Falun Gong, let alone "using a cult organization to undermine law enforcement."

Both lawyers demanded acquittal of their clients, but the judge adjourned the session without issuing a verdict.

Mr. Bai He is likely facing a trial for suing former Chinese dictator Jiang Zemin for initiating the persecution of Falun Gong.

On July 23, 2015, he was arrested and had his laptop confiscated. Fengman District Procuratorate twice returned his case to the police citing insufficient evidence, only to give in later after the police fabricated more evidence against Mr. Bai.

While visiting Mr. Bai on January 25 of this year, his lawyer discovered that the procuratorate had forwarded the case to Fengman District Court earlier on.

The lawyer went to the court to review Mr. Bai's case the very next day and realized that three other local Falun Gong practitioners were made co-defendants in the same case. The police uncovered Xing Chunyan, Xing Chunrong, and Liang Yuling's lawsuits against Jiang from Mr. Bai's laptop and used the discovery as evidence to charge them together with Mr. Bai.

Ms. Li Fanglan was arrested on January 26, 2016 and is now held at Jinxian County Detention Center.

The 59-year-old had been repeatedly detained in the past for refusing to renounce her faith in Falun Gong. In particular, she was sentenced to forced labor three times over the years. Prior to her labor camp detentions, her husband was pressured by the authorities to send her to a local mental hospital,

Ms. Li was tied up to a bed and given unknown substance on a regular basis while held in the mental hospital. She became disoriented and had aches all over her body. She suffered from non-stop migraine and lost her memory. It took her younger sister and stepmother a great amount of efforts to rescue her and bring her back home. However, Ms. Li has never recovered from the complications, including head tremor and facial twitch induced by being forced to take the unknown drugs.

She was sentenced to forced labor for the first time in late 2002. The guards forced her to listen to broadcasting that slandered to Falun Gong all day long, aggravating her already unbearable migraines. When she protested, the guards beat her so badly that her face became swollen and blood dripped from her mouth.

Ms. Li was given two and a half years of forced labor in late 2005. This time she was forced to do hard labor without pay for long hours every day.

Her third labor camp detention came in July 2012. She was again subjected to forced labor and wasn’t released until October 2013 when Jiangxi Province Women's Labor Camp was disbanded.

According to insiders, Ms. Yang went to Xingfu Police Station to tell officers there why the persecution of Falun Gong is wrong, only to be arrested by them shortly afterwards. The police had videotapes of her visit there and were planning to use the recording as evidence against her.

Ms. Yang, an engineer at the Fularji District Glass Factory, was once sentenced to 12 years following her arrest in 2004. While imprisoned, she was force fed unknown substances, which caused her to lose her memory and ability to take care of herself.

She gradually recovered after her release in 2014, thanks to her practice of Falun Gong. However, she was back in custody again in early December last year.

Police arrested more than 100 local Falun Gong practitioners this past November, and 53 of them are still in detention at the time of writing.

Chaoyang City Detention Center has banned family visits and delivery of food and clothes to the detained practitioners. Moreover, the guards are using various means or persecution in their attempts to get the practitioners to renounce their faith in Falun Gong.

As a result of the threats and physical abuse, several practitioners have developed severe medical conditions.

Most recently, Ms. Huo Huixian, 70, was taken to the local hospital for a checkup. According to insiders, she was still cuffed and shackled while visiting the hospital on February 2, 2016.

Yan Xuguang has been transferred to a labor camp hospital in a different city. As the family is denied visitation, they are extremely concerned about her wellbeing.

Wu Jinping and Ren Man are also known to be suffering from declining health while in detention.

“My Mother Taken Away When I Was Nine”