(Minghui.org) Within less than a month before the Chinese New Year, Falun Gong practitioners collected 2,100 signatures in the villages around Liaoxi City, Liaoning Province.

Practitioners from the area went to markets and small villages to pass out fliers introducing Falun Gong and exposing the 16-year persecution. They also talked to people about the more than 200,000 lawsuits that Falun Gong practitioners have filed against former dictator Jiang Zemin, who singlehandedly launched the persecution. 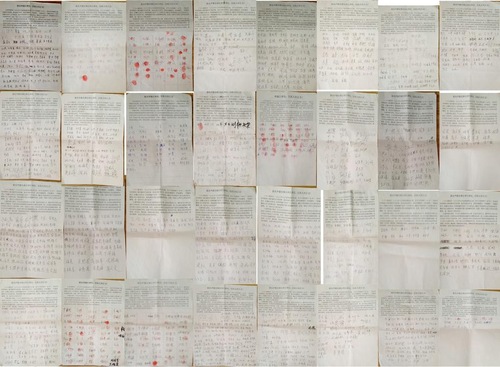 More than 2,100 people in Liaoning Province signed petitions to show their support for the lawsuits being brought against Jiang Zemin, who ordered the persecution of Falun Gong.

The villagers understood that the Chinese Communist Party is collapsing under the weight of its own corruption and crimes. One man sitting on an agricultural vehicle commented, “The communist party has done so many bad things. It is doing itself in!”

Other people commented that Jiang Zemin is a traitor to his country and should have been brought to trial a long time ago.

One woman signed the petition and then said that her daughter and son-in-law also supported the lawsuits against Jiang.