(Minghui.org) Ms. Yu Yumei (於玉梅) worked for the Writers' Federation in Heilongjiang Province. When she was imprisoned and tortured for her practice of Falun Gong – a belief system currently persecuted in China – she treated her persecutors with kindness. Her warmth changed the minds of many prison guards, collaborators and prisoners. They stopped persecuting her, treated her with respect and formed positive opinions about Falun Gong. 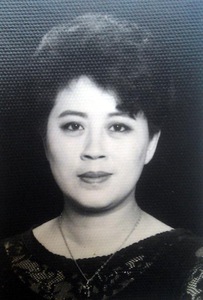 A Diamond in the Rough Becomes Considerate and Warm

Ms. Yu used to be a rather stubborn and willful person. When she was 14, she unloaded a ton of coal by herself. She was the head of the household for both her and her husband's family, and made their decisions in everything – from where to relocate to what shirt to buy.

After she became a practitioner in 1995, she became more considerate, and began to take other people's opinions into consideration. She was courteous, and stopped forcing her opinions on others. She volunteered to give up her rights to her mother-in-law's house when everyone was fighting for it.

Before she became a practitioner, Ms. Yu also suffered from severe arthritis and back pain. She would be in tears if she had to bend down to remove a rock from her shoe.

A year into her practice, not only was her arthritis and back pain gone, her heart disease and mammary gland overgrowth also disappeared without any medical attention.

Ms. Yu went to Beijing to protest against the persecution in July 1999, and she was unlawfully arrested and detained.

The police arrested Ms. Yu again on April 21, 2002. They threw her in a police vehicle and beat her until she was unconscious. She was interrogated and brutally beaten again in Harbin Police Department that night.

During her time in the police department, she heard beating and screaming from other interrogation rooms and witnessed the police hang up a practitioner from the door and force a high-voltage electric baton into his mouth.

The police accused Ms. Yu of tampering with television programming signals so as to stream Falun Gong videos. They arrested her husband, daughter and her daughter's boyfriend as well, who were not practitioners.

The police ransacked her two houses, confiscated all of her cash and bank deposits, and broke her valuable collectables. They used random documents as evidence against her in their trumped up charges. Within a few days after her arrest, Ms. Yu's dark hair had turned gray.

The police interrogated Ms. Yu almost every day for six out of the eight months that she was detained, even after when she would faint due to hypertension. One time the police tied Ms. Yu down on a Tiger Bench, beat her until she was unconscious, poured cold water on her to wake her up, and continued to beat her when she refused to answer the police's questions. There was always a doctor with an emergency kit stationed outside of her interrogation room, just to keep her within an inch of her life.

One day a guard on duty fell asleep at his desk. Seeing the cold air from the window blowing on him, Ms. Yu, who was handcuffed to an iron chair, shouted to wake him up.

“You said that you had coronary heart disease. Sleeping in the cold isn't good for you,” Ms. Yu reminded him.

The guard was stunned by her comment and how she was thinking of him. He later told her that he couldn't do this job anymore.

“It's against my conscience,” he said.

He left the next day after reminding Ms. Yu to take care of herself.

Ms. Yu was later tried in Nangang District Court, and her lawyer didn't show up at her trial. At the time the Chinese regime was suspending lawyers' licenses for defending Falun Gong practitioners. In her second trial, she had to defend herself while the court officials frequently interrupted her speech. Ms. Yu was eventually sentenced to five years and put in Heilongjiang Women's Prison in February 2003.

The guard in the 9th prison ward would search Ms. Yu's cell several times a week and tore apart her Falun Gong books. Ms. Yu scolded the guard, and the captain threw her in a solitary confinement cell. In the cold March weather, Ms. Yu was left without heating, bedding or warm clothes. She was handcuffed and shackled to the ground, and could only sit with her back hunched.

Her handcuffs cut into her flesh and were only removed when she ate. She was given meager servings of food, often as little as two bites of noodles per meal. She was not provided with sanitary napkins during her period, and she was also forbidden from changing her clothes.

After eight days in solitary confinement, Ms. Yu became too weak to walk due to the torture. The authorities transferred her to an unknown location outside of the prison and kept her in a cell full of torture tools. Without a bed, Ms. Yu could only rest by sitting on the concrete floor.

She was interrogated night and day. Twice, she was tortured to the brink of death during the interrogations and fell unconscious. She was diagnosed with high blood sugar and intracranial pressure.

One night a guard whispered to her, “Why don't we switch, you can sleep on my bed and I'll sleep on the ground.”

Ms. Yu refused, not wanting him to get into trouble. The guard brought her warm water so that she could clean up and helped trim her toe nails. She thanked the guard and reminded him not to help the authorities persecute other Falun Gong practitioners. They had a long talk that night, where she told him her story and the truth behind the persecution.

A man who was known to have always succeeded in torturing practitioners into giving up their belief was sent to Ms. Yu's cell. After two days of torture, Ms. Yu couldn't even sit up or talk. When she regained some energy to speak, she told the man, “I will not do what you want. You have talked for a long time, please drink some water.”

She continued, “I practice Falun Gong to be a good person. You are being deceived into hurting good people. I am afraid that you will be in trouble one day, when this crime is exposed.”

The man listened to her quietly.

From then on the man would order the guards to give Ms. Yu nutritious food or go out to buy food for her. When he admitted that he couldn't force Ms. Yu into giving up her belief, Ms. Yu said, “I ruined your 100 percent success rate, which is a good thing for you, as that's one less crime you have committed. You are not a bad person. Please stop doing what you are doing.”

When Ms. Yu was transferred out of that location, he told her, “Please take care.”

Studying and Exercising Inside the Prison

Ms. Yu was transferred back to the prison eight months later. At the time the prison was beginning to intensify the persecution of the practitioners. The practitioners went on a hunger strike in protest, and the guards had the prisoners pry open their mouths with metal tools and force feed them. Over forty practitioners there were relentlessly tortured and injured, including Ms. Yu.

When Ms. Yu saw or heard other practitioners tortured, she would stand up to help them. She knocked on the guards' door asking them to stop their coworkers, demanded to see the warden to ask him to stop the torture, and shouted to get everyone's attention towards the guards who beat the practitioners.

Practitioners helped out one another in the prison. When Ms. Yu was weak and felt cold after the torture, two practitioners surrounded her and warmed her up with their clothes. When she was injured after vicious beatings, other practitioners would clean her up.

Ms. Yu was transferred to the 8th ward in 2004, and a prisoner named Liu Xiaomei was put in charge of monitoring her. Liu was accused of killing her husband while she was drunk. Ms. Yu often talked to Liu about Falun Gong and urged her to practice kindness and not to harm others. One day Liu went and told the prison guard that she had made a mistake, and could no longer help persecute Falun Gong practitioners.

Before Ms. Yu was released on April 22, 2007, Liu wrote her a list of the names of her family members and asked that Ms. Yu help them quit the Chinese Communist Party and its affiliates.

Liu told her, “After I am released, I will tell each one of them what happened to Falun Gong and I will definitely take up the practice.”

In the midst of the Chinese regime's slanderous propaganda against Falun Gong, many guards and prisoners Ms. Yu encountered in prison changed their minds and had positive attitudes towards Falun Gong. Many of them quit the CCP and its affiliates, and some began to read the Falun Gong teachings.

“Practitioner Ms. Wei Caixia Sues Jiang Zemin for Her Mother's Death and Her Own Suffering”