Dalian, Liaoning Province: 16 Sentenced, 7 Awaiting Verdicts, and 17 Facing Trial in Second Half of 2015 for Resisting Persecution of Falun Gong

February 13, 2016 |   By a Minghui correspondent in Liaoning Province, China

(Minghui.org) According to data compiled by Minghui.org, a total of 82 residents in Dalian City were arrested for resisting the persecution of Falun Gong in the second half of 2015. Notably, 42 of them were seized after filing criminal complaints against former Chinese dictator Jiang Zemin for initiating the persecution.

A few of the newly arrested practitioners, together with several arrested prior to the study period, were sentenced to prison. In total, 16 were given sentences ranging from 3 to 8 years. Families of the imprisoned practitioners worry that they may face the same kind of abuse and torture that befell many others jailed for refusing to renounce their faith in Falun Gong. 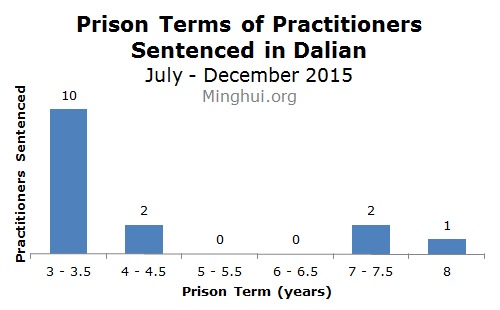 At the time of writing, 7 of the 82 arrested were tried but are still awaiting verdicts. Another 17 saw their arrests formally approved and are facing trial.

In addition to the arrested, 35 Dalian residents were also harassed for filing criminal complaints against Jiang. On September 8, 2015, three police officers broke into Ms. Wang Guiqin's home to interrogate her and ransack the place. Her mother was frightened and passed away only six days later. 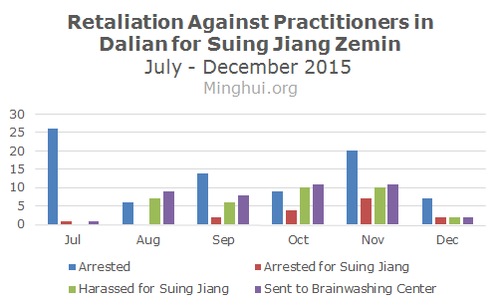 Fifteen women and one man were sentenced to prison after show trials. Most people received 3 to 4.5 years, with Ms. Xu Meihua given 8 years, and Ms. Chen Yazhou and Ms. Li Daorong each 7 years. Half of the sentenced have been transferred to Liaoning Province Women's Prison, while three are appealing their verdicts in detention centers.

Ms. Xu Meihua, 62, a practitioner from Ganjingzi District, was arrested on October 16, 2014, sentenced to 8 years in prison in May 2015, and taken to the Liaoning Women's Prison on October 27, 2015. At her trial on May 18, 2015, the prosecutor pointed to Falun Gong books and handouts that police seized from her home as evidence.

Ms. Chen Yazhou, a practitioner from Jinzhou District, was arrested and her home ransacked in July 2014. Jinzhou District Court sentenced her to 7 years in prison without giving any notice to her family. She was transferred from Yaojia Detention Center in Dalian to Liaoning Women's Prison in Shenyang City.

Ms. Liu Jingyu, 66, a practitioner from Jinzhou District, was arrested and her home ransacked on July 8, 2015. She was sentenced to 4 years on December 26, 2015. She has appealed to a higher court and is now being held in the Dalian City Detention Center.

Officials from her residential community went to Ms. Liu's home several times in the first half of 2015 and ordered her to write a statement, promising to give up her practice of Falun Gong. When she refused, an official named Wang Xin told her, “Then you have to take responsibility for the consequences.”

Soon after, Wang led several police officers and agents from the “610 Office” to her home and threatened her.

These newly sentenced practitioners are likely facing abuse that many others went through for refusing to give up Falun Gong. The following two cases are typical of what Dalian practitioners are subjected to while in prison.

Mr. Zhu Chengqian, from Dalian City, is now incarcerated in Liaoning Province No. 1 Prison. He went on hunger strikes to protest the persecution and was brutally force-fed. His is now in critical condition.

On December 28, 2015, Ms. Zhu's elder brother and family went to visit him at the prison. They tried to do so three times in the first half of 2015, but were not allowed to meet him. This time, due to their persistent demands, guards finally allowed his brother to meet with him for 15 minutes.

Ms. Zhu's brother saw him sitting there, unable to lift his head up. He was emaciated and could hardly talk due to weakness after 40 days on a hunger strike. He told his brother that he had been force-fed six times. He said, “If anything bad happens to me, it's because of their persecution. I will not 'transform' no matter what.”

When they finished talking, his brother saw that he had difficulty walking.

Mr. Qu Bin, 42, from Dalian City, is now held at Liaoning No. 1 Prison. This is Mr. Qu's seventh arrest and second sentence. He has not been allowed family visits, because he refused to give up his belief in Falun Gong.

Mr. Qu's wife was finally allowed to see him on December 28, 2015, only to find that his eyelids were red and swollen with extravasated blood.

She asked him what had happened. Before he could reply, a guard monitoring their conversation warned him, “Don't give me any trouble.”

Another 17 practitioners saw their arrests formally approved and are awaiting trial. They include:

The following practitioners were previously held at a local brainwashing center following their arrests: