(Minghui.org) Although she now lives in Sydney, Australia, Ms. Chen finds it important to reconnect with her fellow Chinese countrymen. “As a Falun Gong practitioner, I know that many Chinese have been poisoned by the ongoing hate propaganda from the Chinese Communist Party (CCP),” she explained. “I feel that I have to tell them the real story about this peaceful meditation, so that they are not against Falun Gong's principles of Truthfulness-Compassion-Forbearance.”

Ms. Chen often goes to the Sydney Opera House, one of the most well-known Australian landmarks, where she talks to tourists from all over the world about Falun Gong. 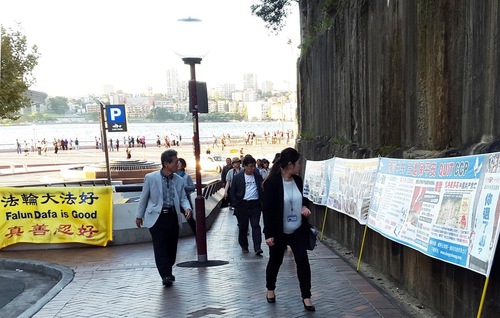 Importance of Quitting the CCP

Ms. Chen once met a tour group from Shanghai and began to chat with them. “I have heard about Falun Gong from a friend and she often did the exercises in a park,” said one tourist. She added that Falun Gong is not at all as the defamatory propaganda has claimed.

“Glad to hear that,” Ms. Chen said to her. “Since you know the Party is bad, do you know that many [Chinese] people have separated themselves from the regime?”“I am not worried about it, because I am a Christian now,” answered the tourist.

Ms. Chen explained that because people vowed to devote their lives to the Party when they joined these organizations, it is important to sever ties with the Party. “This also applies to the CCP's junior organizations such as the Communist Youth League and the Young Pioneers.”

The tourist agreed, and other people in her group also took informational materials. 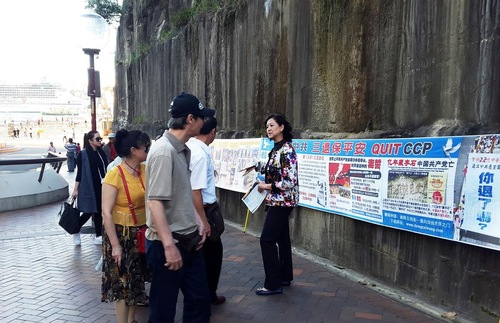 A practitioner (right) talks to Chinese tourists about the persecution of Falun Gong in China.

On another occasion, Ms. Chen greeted a Chinese tour group as they stopped at the Sydney Opera House. “It is very nice to meet you here,” she smiled.

“He is our supervisor [at work]. We all listen to him,” said one tourist, pointing to a man in the center of the group.

Ms. Chen explained to them that each person has to be responsible for their own life, and recalled the Chinese proverb which states that good is rewarded with good and evil meets with karmic retribution. “Because of its bad deeds, the CCP will be weeded out by heaven. We don't want to sink with it, right?”

The man nodded and said that he was willing to quit the Party. Several other people followed suit and also renounced their membership in the Party.

One tourist took a copy of each piece of printed information and sincerely thanked Ms. Chen: “Thank you for giving us so much information,” he said. “Please take care and keep up the good work.”

Through the efforts of Ms. Chen and other Falun Gong practitioners, many people have learned about Falun Gong and have expressed their opposition to the brutal suppression of Falun Gong in China.

Clive, who works at the opera house, said that his parents were from Shanghai and he was born in Australia. “They [Falun Gong practitioners] look very peaceful and it is hard to imagine why any government would suppress their belief,” he said as he signed a petition calling for an end to the persecution.

Banny Da Roza, in the retail business, accepted a pamphlet from a practitioner and began to read it. “Why would the Chinese Communist Party do this?” she asked, pointing to the information on forced organ harvesting in China. After listening to a practitioner explain the brutality and hate propaganda issued by the CCP, she signed a petition without hesitation. 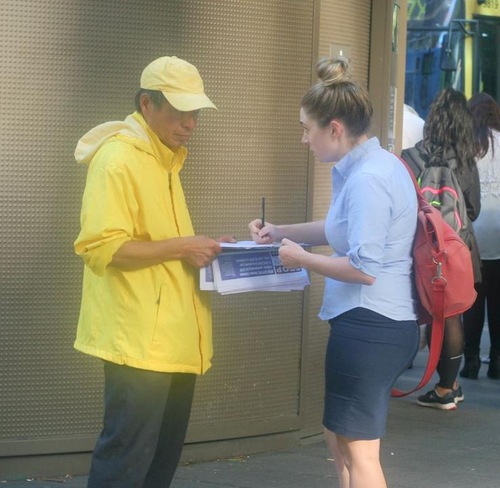 Manuela from Argentina said that she was interested in learning the Falun Gong exercises. “I'm looking for something relaxing and beneficial to my health. This seems to be a good choice for me,” she said. 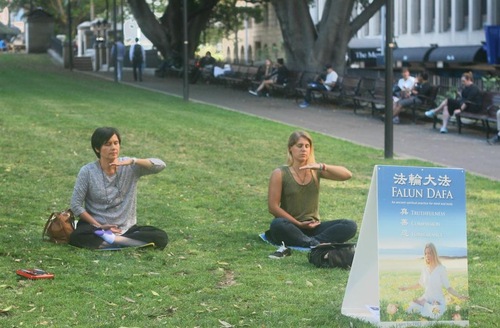 ““We Stand with You”: Warm Support for Falun Gong in Siberia”

“Improving Myself by Looking Inward”