From Too Weak to Work to Running a Business

(Minghui.org) Taiwanese Falun Gong practitioners frequently go to tourist sites to reach out to visitors and residents alike, raising awareness of the brutal persecution in China. Rain or shine, practitioners will be found at the Shilin Official Residence all year around. The Shilin Official Residence is the former residence of late Republic of China President Chiang Kai-shek in Taipei, and is a popular destination for visitors to Taipei.

Among the practitioners who often go to the Shilin Official Residence, Tung Kuo-chiang is there several times a week. 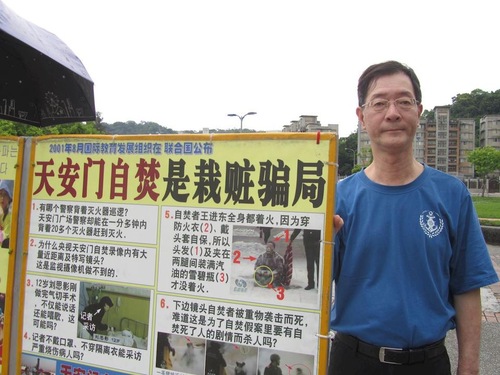 Those who know Tung Kuo-chiang are surprised to see him so energetic. This is because he was once very ill and was too weak to work. He is happy to tell people that his health turned around after he started practicing Falun Gong.

Kuo-chiang's parents were successful business people. Young Kuo-chiang was introverted but was friendly and likable and got good grades in school. However, he had poor health since he was born.

He often had fevers and suffered from allergies and infections. Kuo-chiang had to have injections and take medicines daily. His mother brought him to various doctors but none could diagnose his condition or offer much relief. His mother sought help in religions, including Buddhism, Taoism and Christianity, as well as folk remedies, but his health did not improve.

Kuo-chiang was easily tired and was unable to work. Because of his poor health he was often misunderstood as being irresponsible and a slacker.

Kuo-chiang kept a positive outlook despite his poor health. He was particularly curious about the meaning of life and was interested in biology in school. He majored in medical science in his undergraduate studies, hoping to learn as much as he could about life. He also studied Buddhist scriptures and participated in Buddhist ceremonies.

His pursuit of learning did not answer his questions about the meaning of life and instead, he was more perplexed.

Kuo-chiang's father had a stomach ulcer and kidney problems. His mother also had poor health as a result of taking care of their family of seven children. Both his parents were on daily medications.

In 1996, his parents learned Falun Gong after some friends recommended the practice to them. They both became healthy and energetic within a few months. Seeing their marvelous change, Kuo-chiang started practicing Falun Gong with his parents.

His appetite improved dramatically after he took up the practice. Within one month, he became healthy and did not need medicine anymore. He never imagined not needing medicine, as he'd grown up taking medicine daily. He was amazed that practicing Falun Gong for such a short time eliminated all his illnesses.

Kuo-chiang said with tears in his eyes, “Falun Dafa is great! My health changed a lot from practicing it. The principles in Zhuan Falun are profound!”

He recalled reading Zhuan Falun, the main book of Falun Gong, for the first time. He was stunned that even though the book is written in simple, straightforward language, it provided answers to his questions about the cosmos, life, and the purpose of human life. All his life-long questions were answered in the book.

Kuo-chiang said, “The connotations of Dafa are profound and boundless. I have benefited so much. By following Falun Gong's principles of Truthfulness-Compassion-Forbearance, I look inward when facing conflicts and understand what is right and what is wrong. This results in no negative thinking and helps me deal with everything calmly and wisely.”

Now, Kuo-chiang, who used to be too weak to hold a job, has started his own small business. In business or daily life, he follows the principles of Truthfulness-Compassion-Forbearance. His upstanding demeanor has had a positive impact on others.

In order to share the benefits of Falun Gong and to raise awareness of the brutal persecution of the practice in China, Kuo-chiang goes to the Shilin Official Residence several times a week. He holds banners, demonstrates the Falun Gong exercises, and distributes informational materials. He was initially hesitant to talk with tourists, as he was introverted and lacked confidence. Once, several tourists from South Korea and Japan asked for more information after reading the posters. Kuo-chiang answered their questions as he speaks fluent English.

“Now I know that truth-clarification is not difficult. You don't have to be talkative. As long as you are sincere about the wellbeing of the other party, you just tell them what you know,” said Kuo-chiang.

Kuo-chiang also talks with Chinese tourists about Falun Gong to dispel the negative propaganda put forth by the Chinese Communist Party (CCP). He is gratified when visitors from the mainland come to understand the practice and realize how terrible the persecution is. “They will have a safe future if their misunderstandings from the CCP's propaganda is eliminated. I am so grateful to be a Falun Gong practitioner. I am very fortunate.”