(Minghui.org) Over 270,000 people in Japan signed petitions around Human Rights Day, December 10, calling for an end to the persecution of Falun Gong in China.

This followed a series of events held in Tokyo in the last three weeks to raise awareness about the persecution and forced organ harvesting in China, which included a film screening, press conference at the House of Representatives, a new book release, and a discussion forum.

Human Harvest: China’s Illegal Organ Trade, a documentary examining the illegal organ harvesting industry in China, was screened in Tokyo for the first time on November 30.

Based on independent investigations by human rights lawyer David Matas and David Kilgour, the former Secretary of State in Canada, this documentary received the prestigious Peabody Award in the U.S. in May 2015. Both Matas and Taiwan physician Huang Shiwei attended the screening and answered questions.

Huang said it was in 2001 that he began to notice patients of his traveling to China for organ transplants. “As far as I know, more than 4,000 people have done so for kidney and liver transplants in the past 14 years. They were from Taiwan, Hong Kong, Macau, Malaysia, Singapore, and other countries in Southeastern Asia.” Similar cases have also been discovered in Japan as early as 2000.

Matas said many actions could be taken in Japan to stop involvement in forced organ harvesting in China. Yoshida Koichiro, former member of Tokyo government, The Tokyo Metropolitan Assembly, suggested a ban on organ transplant tourism to China. “This [forced organ harvesting] is like murder, and laws should be introduced to stop it,” he said. 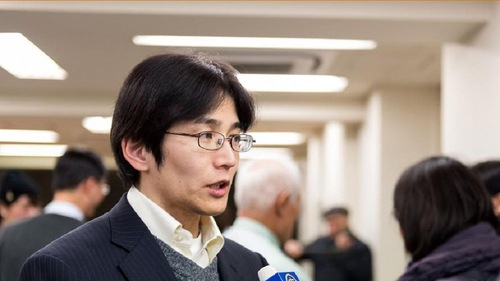 Kilgour and Matas presented their new findings on organ harvesting in China on December 1 at the House of Representatives. Hiroshi Yamada, a member of the House of Councilors, hosted the event.

The new report on forced organ harvesting includes evidence collected by the investigators, including transplant hospitals related to Japanese patients, related events to recruit more patients, case studies, and how large numbers of Chinese surgeons received training in Japan. “This situation needs to change,” said Matas, adding that the first step is to identify how many Japanese patients are involved in organ transplant tourism, followed by passing laws that prohibit it.

Yamada said many Japanese have traveled to China for organ transplants, making the issue of forced organ harvesting too important to ignore, “The public has not been well informed in the past and the parliament should follow it closely.” He said neglecting this issue is essentially allowing the killing of Chinese prisoners of conscience and Falun Gong practitioners for their organs, which should never happen.

An Unprecedented Evil Persecution: A Genocide Against Goodness in Humankind, was introduced in Japan on December 2. The book features articles by 19 experts on organ harvesting in China and the persecution of Falun Gong.

Kilgour and Matas, authors of the book, joined Huang at the new book release at the Clear Insight Publishing branch in Tokyo. Since August 2015, this book has been published in English, Chinese, Korean, French, and now in Japanese. Kilgour said they have been investigating this crime for more than 10 years and they will “continue to do so until China stops it.”

Hung said physicians and surgeons are meant to save people, instead of using their skills to conduct murder. “After World War II, those physicians and surgeons who participated in the genocide were among the first to go on trial, and they received the longest terms for their involvement. Ignorance and acquiescence led to the slaughter back then and we cannot allow it to repeat again,” he said.

Hiroshi Yamada hosted a forum on the afternoon of December 2 to discuss organ transplant tourism with experts from Canada and Taiwan.

Matas explained that, based on information published by the Chinese government, he and other investigators have examined these hospitals including the number of beds, employees, bonuses and so on. From the hospital bed turnover and the increase of transplant hospitals from 146 to about 300, the number of transplants was estimated to be between 60,000 and 100,000 per year, far exceeding the Chinese government's cited annual number of 10,000. Most of the victims are Falun Gong practitioners.

“These Chinese hospitals accepted a large number of overseas patients. Many surgeons have received training from Japan and other nations,” said Matas. In addition, China-Japan Friendship Hospital, a hospital established in 1984 with Japanese funds, conducted many kidney transplants, he said.

Emphasizing the need for legislative action in Japan, Kilgour said, “There used to be many patients from Taiwan participating in transplant tourism. Now laws have been passed to ban this. Similar actions were taken in Australia.”

“I Support You with My Heart”

One man from Ueno said he had heard about the suppression for several years. “It has been a long time and I thought the persecution had already stopped. Thank you for telling us about such an important matter.” 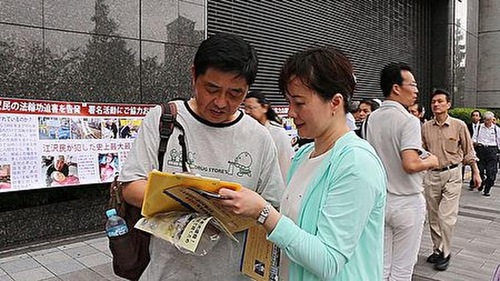 Over 270,000 people signed petitions in Japan around Human Rights Day.

An older man said he was sorry for what had happened to practitioners. “I am 70 and there is not much I can do to help you. But I will support you with my heart. Please keep up the good work!”

One woman who signed a petition said she heard about it from her daughter, “I was shocked and I felt I must do something about it.”