Since the state-sanctioned organ harvesting of Falun Gong practitioners in China was first exposed in 2006, several documentaries have been made to reveal this ongoing crime. Last week, volunteers in New Zealand, Australia, and Denmark screened two of these documentaries.

Human Harvest, a prestigious Peabody Award winner, was shown for the first time in New Zealand at the Rialto Theatre in Auckland on November 23. This documentary focuses on investigation into the Chinese regime's forced organ harvesting of prisoners of conscience by two Canadian independent investigators, David Kilgour, former Secretary of State for the Asia-Pacific region, and David Matas, a well-known human rights lawyer.

After the screening, city council member Cathy Casey hosted a forum, with David Kilgour present to field questions from the audience. 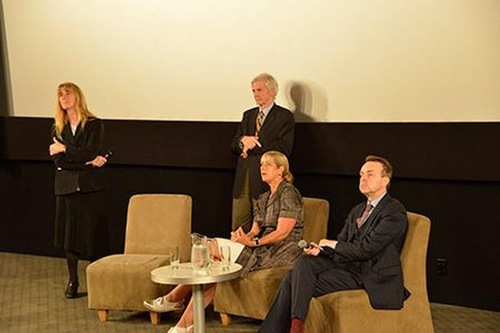 Cathy Casey, David Kilgour, Phillipa Jean Malpas, and Kerry Gore (from left to right) at a Q&A session after the screening of Human Harvest.

Dr. Phillipa Jean Malpas from the University of Auckland and human rights lawyer Kerry Gore also spoke at the forum.

Dr. Malpas studies medical ethics. When asked if the organ harvesting in China is a crime of genocide, Dr. Malpas responded with an unequivocal “yes.” She called on the public not to keep silent on this issue.

Key questions from the audience centered on what New Zealanders can do about the atrocities in China, and why the media has been so quiet on this. Some people in the audience suggested taking action on social media sites, such as Facebook. The host of the forum, Cathy Casey suggested bringing the issue up during the upcoming national elections next year.

On the same day as the screening in New Zealand, Human Harvest was also shown in Copenhagen, Denmark.

The Danish audience, which included people from all walks of life, held a lively hour-long discussion after the screening.

Dr. Geert, a local physician, has been concerned about the forced organ harvesting in China since he first heard about it three years ago. He has tried to attend every event related to this issue, and has kept all the informational materials. He questioned why the Danish media has been so passive on reporting this crime.

Lisbet, a coworker of Dr. Geert, was shocked by the facts revealed in the documentary, although she has heard about it from Dr. Geert. She thanked the host and volunteers for their courage in screening the film and for their ongoing efforts to raise public awareness of this crime.

Another recent documentary about the same topic, Hard to Believe, was shown at Dendy Cinemas in Canberra, Australia on November 22, in a special screening for local medical experts, scholars, lawyers, and politicians. 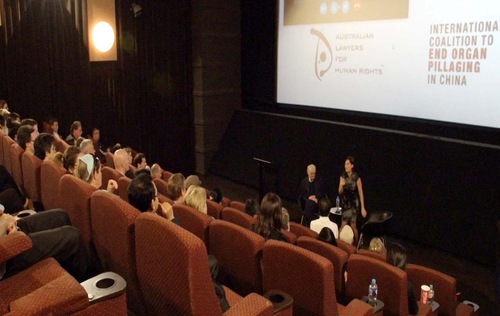 Discussion after the screening of Hard to Believe in Canberra. 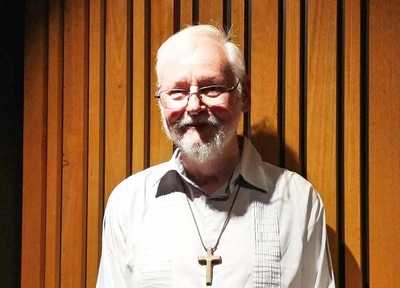 Pastor Ken Perrin has signed the petition calling upon the Australian government to take action to stop the persecution of Falun Gong. He is also trying to share this information with his church members.

During a discussion following the screening, Pastor Ken Perrin said he hoped that all world leaders would read the investigation report on the forced organ harvesting, and not keep their eyes closed, as he believes that genocide, which has happened before in history, is occurring again.

Holiday Parades in Australia and the U.S.A.

The Tian Guo Marching Band in Sydney, consisting of local Falun Gong practitioners, was invited, once again, to perform at the Christmas Parade in Gosford on November 26. The Christmas Parade is a traditional community event with 60 some years of history. 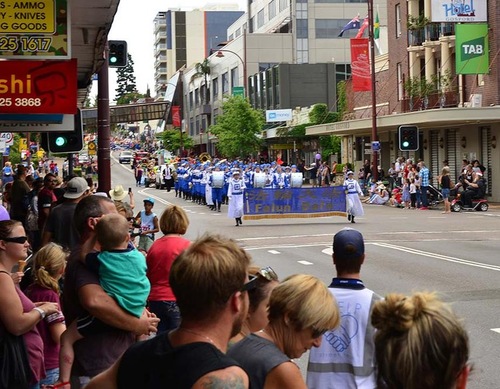 The Tian Guo Marching Band in the Gosford Christmas Parade.

Stephen Clarke, the Gosford Council’s official town crier, was glad to see the Falun Gong band, which was the only Chinese entry in the parade. “Their costumes are so beautiful,” he said. “We appreciate their unique music.” 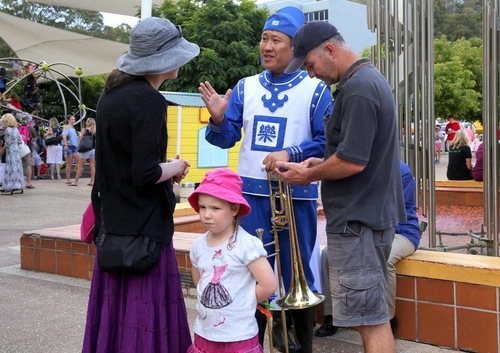 A young couple wanted to know more about Falun Gong after watching the band's performance.

On the other side of the globe, the Tian Guo Marching Band in New York performed in the Thanksgiving Parade in Stamford, Connecticut. 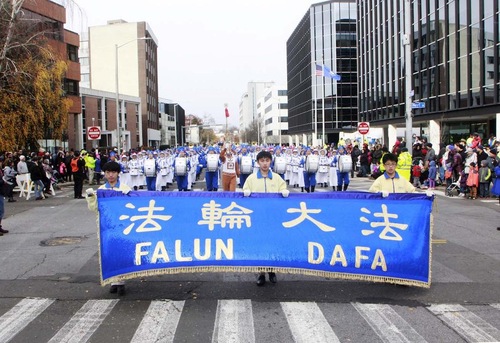 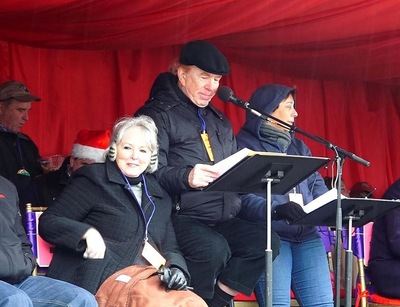 Alan Kalter, the parade MC and TV announcer from New York, told the spectators that the principal teaching of Falun Gong is Truthfulness-Compassion-Forbearance, and the name of the band, Tian Guo, which mean “divine land,” reflects the style and principles of Falun Gong.

In Hiroshima, Japan, practitioners participated in a local Communication Festival on November 19 and 20. They demonstrated the Falun Gong exercises and held a free workshop for people who were interested in learning the practice. 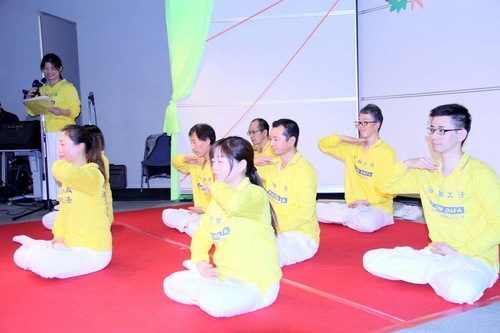 Exercise demonstration at a local festival in Hiroshima, Japan. 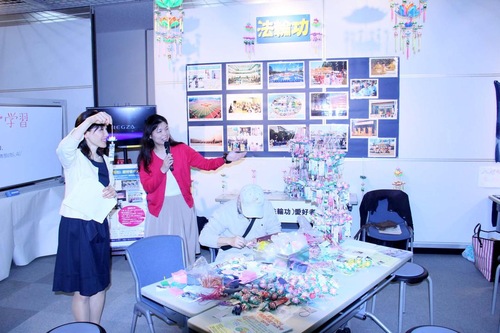 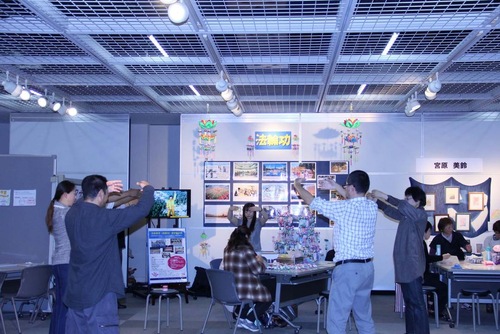 Teaching the exercises in Hiroshima.

Also in Japan, practitioners from Yokohama collected signatures against the persecution in China at a local tourist spot. Many Chinese tourists signed the petition to support Falun Gong's peaceful resistance. 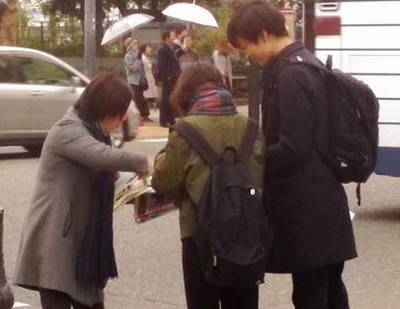 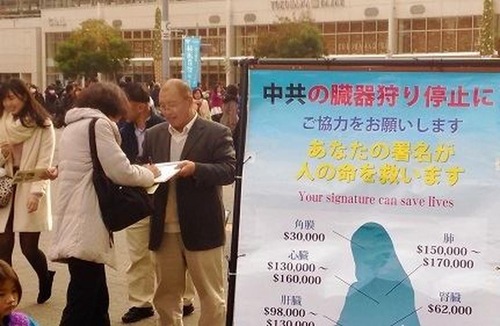 Practitioners in Slovenia started weekly free workshops at the Youth Center in Krško and at the Sports and Health Center in Mengeš in October, where they taught the exercises to all who were interested. 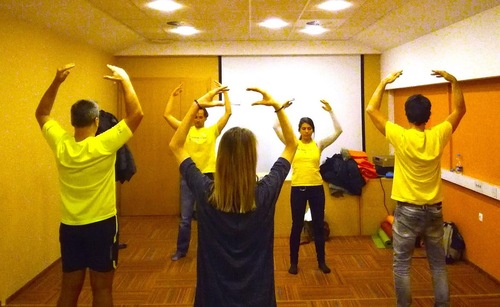 Falun Gong exercise workshop at the Sports and Health Center in Mengeš, Slovenia. 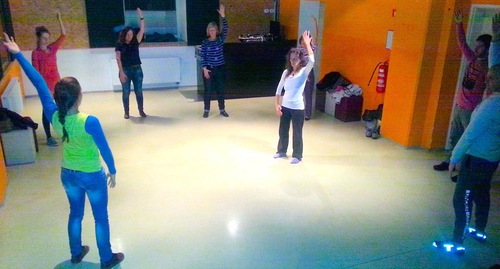 Teaching exercises at the Youth Center in Krško.

On International Night at Arizona State University on November 17, and the school fair at Tsinghua University in Taiwan on November 16, local practitioners set up booths, where they handed out informational materials and taught the exercises for free. 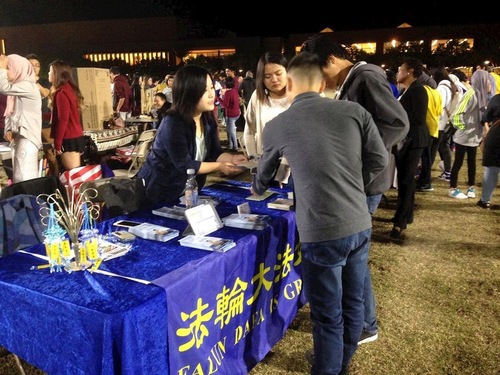 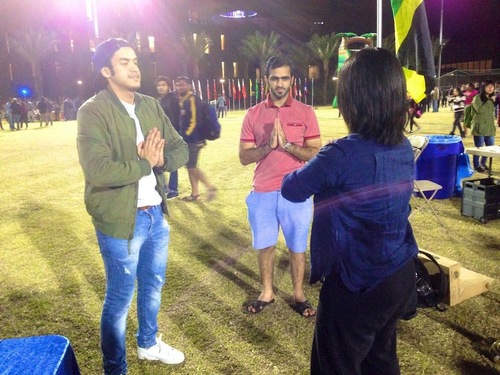 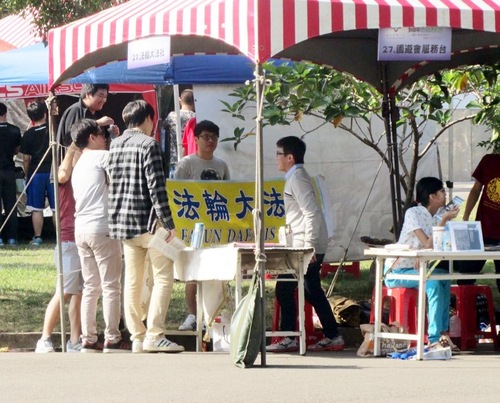