(Minghui.org) More than 1,000 practitioners attended the 2016 European Falun Dafa Experience Sharing Conference on November 6 at Veranstaltungsforum Fürstenfeld west of Munich, Germany. The host read a greeting from Mr. Li Hongzhi, founder of Falun Dafa, in three languages—Chinese, English, and German, in which Mr. Li wrote, “A Fa conference is meant for cultivation. What a cultivator cultivates is none other than him or herself.” 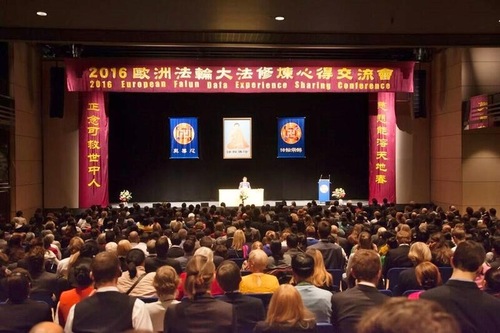 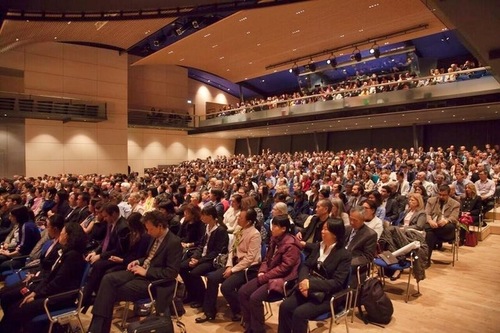 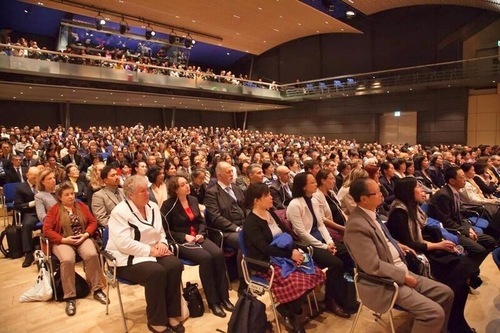 Eighteen practitioners shared their experiences and understandings on how they follow the principles of Falun Dafa, Truthfulness-Compassion-Forbearance. The practitioners were from Germany, Holland, Sweden, Spain, Ireland, Denmark, England, France, Hungary, Switzerland, Turkey, Poland, and Slovakia.

Twelve Members of the European Parliament (MEPs) co-signed a written declaration, WD48, on July 13, 2016, urging more actions against the state-sanctioned organ harvesting from living Falun Dafa practitioners in China. Ms. Wu from Denmark, one of the practitioners who contacted the MEPs about this initiative, shared her experiences related to it.

“Our purpose of doing this is to validate the Fa and to save people,” she said. Therefore, whenever encountering difficulty meeting the MEPs, she and other practitioners would calm down and look within to improve. During the process, they also realized that when they were able to let go of human notions, more wisdom would come out. 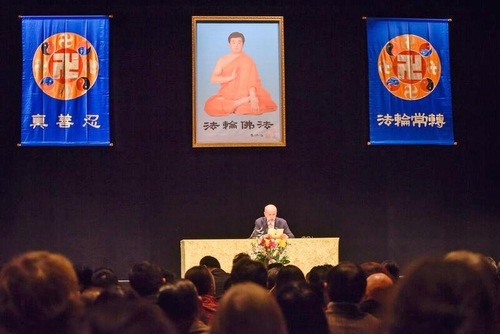 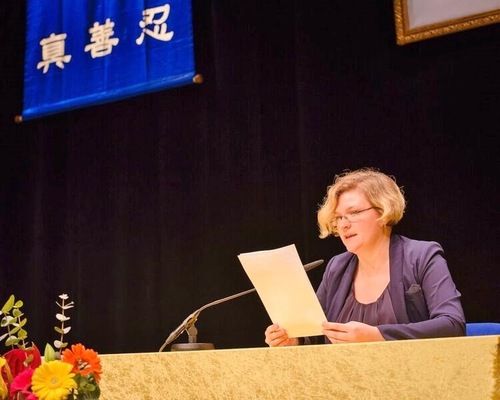 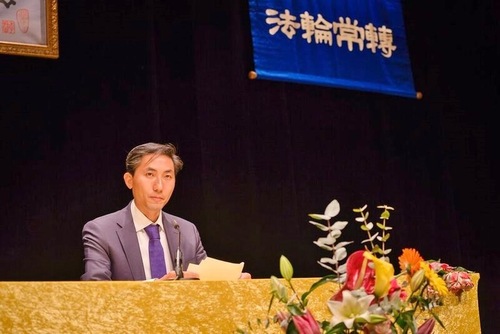 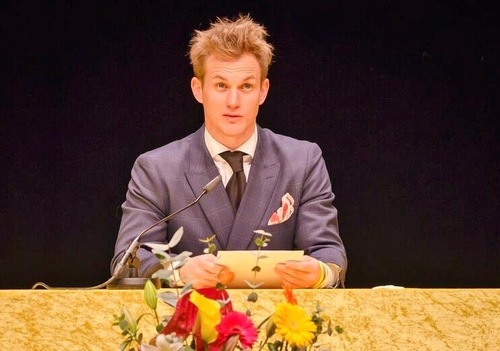 Eighteen practitioners shared their experiences and understandings at the conference.

British practitioner Hayden told his story of having faith in Master and the Fa. He suffered illness karma for many years and a recent layoff made the relationship between he and his wife even worse. “As a result, I had to move out and lived on my own,” he recalled.

With help from nearby practitioners, he spent more time studying the Fa and sharing experiences with them. At that time, some help was needed in Strasbourg France to clarify the facts of Falun Dafa to European Parliament members. Considering this as an opportunity to save people, Hayden made the trip, which resulted in his human notions as well as attachments diminishing dramatically.

“Several miracles happened since then. I was full of energy, and the illness karma that bothered me for 27 years disappeared. I also got a job offer at the Royal College of Art,” he added.

The Happiness of Cultivation Practice

Mr. Wu from Germany has been coordinating the Shen Yun project in German-speaking areas of Europe since May. At first he did not know where to start. But watching Shen Yun and seeing the genuine smiles on the artists' faces made him think a lot. “I know these artists have lots of training all the time, even during the touring performance period. And yet, they also look inward to do better, and their hearts are happy,” he said, “This is because they know that only when you sincerely wish other people good, can the happiness from the bottom of your heart move the audience and save them.”

Therefore, Mr. Wu started by working with other practitioners to resolve conflicts between them. As time continued, they were doing better and better, and many practitioners could work together seamlessly. Some of the regions he worked on have now signed contracts for Shen Yun tour performances and began selling tickets.

A Practice that Benefits Young and Old

Franklin, 80, said he had walked a long way before finding Falun Dafa. From a Christian in his childhood to an atheist as a young man, from questioning everything in his middle-age, to pursuing psychotherapy in the years after, he did not find the spiritual path he was looking for until two years ago.

Nonetheless, it is not easy for a person his seventies to let go of human notions. He said, “Gradually I overcame my comfort zone to make bigger progress. Although I decided not to travel far a long time ago, I did watch Shen Yun at both Stockholm Hamburg. In addition, I went to the New York Experience Conference this May.”

Franklin said that these are the best days of his life because, as a practitioner, he can always see the areas where he can improve and become a better person.

Pavel, 25, is a practitioner from Slovakia. When thinking of building a web page on alternative medicine three years ago, he did some research online and found the practice of Falun Dafa. Soon afterward he began reading the books and became a practitioner.

“It is always good to go to experience-sharing Fa conferences, because I can always see gaps between me and other practitioners.” Touched by the pure hearts and strong righteous thoughts of others, he said he is no longer worried about having enough time to cultivate as a new practitioner, “I know Master's arrangement is the best. I just have to be a genuine practitioner and do well the things I need to do.”

The conference concluded at 5:00 p.m., and many practitioners said they had learned a lot from the practitioners' sharing.

The Wolluer family also felt the urgency of doing better in cultivation practice. Fred, the father, said he was touched by sincerity of the practitioners. Laura and Michael, daughter and son-in-law, said they would overcome the attachment to comfort and clarify the facts about Falun Dafa to Chinese tourists at Neuschwanstein Castle.

Olive, the son who is studying as a graduate student in biochemistry, said he was spending more time studying the Fa. He said, “I think we all have the same goal, that is, being more diligent in cultivation practice and saving more people.”

“Germany: Rally Held in Front of Chinese Consulate in Munich Calls for Stopping the Persecution of Falun Gong”