(Minghui.org) Today's news from China includes incidents of persecution that took place in 16 cities or counties in 8 provinces. According to this report, 21 Falun Gong practitioners were subjected to mistreatment during their detention, and at least 8 were illegally arrested. 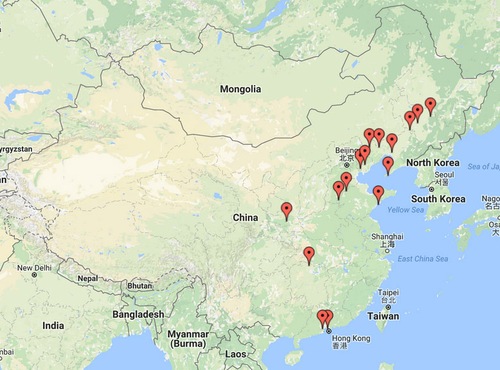 Officers from the Ningcheng County Domestic Security Division and the Tiexi Police Station, holding electric batons, went to Ms. Ma Guilan's home on the morning of October 20, 2016. They knocked on her door and claimed that they were staff from the local residential community.

Officers led by the deputy director of the Baiqi Town Police Station broke into Mr. Wang Jikong's home in Goubei Village, Baiqi Town, on the afternoon of October 18, 2016. They ransacked the place. Mr. Wang, 70, was taken to the police station for interrogation notes. He was later released.

The officers went twice to Mr. Jiang Yihong's home and ransacked it on the afternoon of October 18, 2016. Mr. Jiang was not at home. They took his mother Ms. Tan Yuling to the police station. She was released after being interrogated.

The officers returned to Mr. Jiang's home the following afternoon. Mr. Jiang was not at home. They tried to force his mother to sign some paperwork, which she refused.

Officers from the Liangjiashan Township Police Station went to Xinglong Village to harass Mr. Zhu Zhaohe and Mr. Wang Youhua on October 19, 2016. Both practitioners were not at home.

Ms. Cui Ronghua was arrested at home by officers from the Taoyuan Road Police Station on the evening of September 10, 2016. Her home was ransacked.

Ms. Cui was arrested and taken to the police station last year for suing Jiang Zemin, former head of the communist regime who launched and directed the persecution of Falun Gong.

Ms. Wang Yuqin, Ms. Lu Duomei, and Ms. Chen Yulan were tried at the Decheng District Court on the morning of October 13, 2016. They were brought into the courtroom with black hoods covering their heads.

She appealed to the Liaocheng City Intermediate Court. The intermediate court revoked the original verdict on September 22, 2016, and returned the case to the Guan County Court for retrial.

The Guan County Court scheduled a retrial for October 24, 2016.

Ms. Ni was arrested by Liu Yang, an officer from the Chengdong Police Station, on October 28, 2015.

Ms. Wu Jinhuan was arrested by officers from the Licun Police Station in Licang District on the evening of October 17, 2016, for distributing Falun Gong informational materials. Her home was ransacked. She was taken to the Jimo Detention Center.

Mr. Hu Ke, 19, was followed and arrested by plainclothes officers on the afternoon of October 18, 2016, for distributing Falun Gong informational materials in Henglan Town. The officers confiscated his computer and other personal items.

After Mr. Jiang Rongxin was arrested by officers from the Songyuan Police Station in Guanlan District, his blood pressure rose and he had a heart attack. He was taken to a hospital and then to the Jiuwei Detention Center in Bao'an District.

Mr. Jiang suffered a heart attack and high blood pressure again around October 10, 2016. He is now in critical condition. His family and lawyer are asking that he be released.

Officers from the Huanggezhuang Town Police Station in Fengnan District broke into the homes of Ms. Zhang Ruilian, Ms. Ma Cuixiang, Ms. Li Zihua, and Ms. Zhang Shuyin for harassment in October 2016. They tried to force the four practitioners to sign paperwork.

The four practitioners were arrested on December 15, 2015. Ms. Wen was released after she failed the required physical examination for detention. The other three practitioners are being held in the Tangshan City No. 1 Detention Center.

Mr. Tan Guodong, 78, was taken to the Jinshi Prison at the end of September 2016. Three years ago, he was sentenced to three years in prison, with a three-year probation for health reasons. This time, he was imprisoned, and his term was extended by six months.

Ms. Liu Yanping was tried by the Jinzhou District Court on October 20, 2016.

Officers led by Wang Huaifu, political instructor of the Wafangzi Town Police Station, broke into Ms. Wang Chunxia's home and arrested her on the morning of October 20, 2016. They confiscated Falun Gong books and other personal belongings. The officers took Ms. Wang to the police station for interrogation. The officers forcibly took her fingerprints before releasing her that day.

Mr. Li Chunsheng, Ms. Zhang Yuqin, and Ms. Liu Bailing from the Huanxiling Area were arrested by the local police when they talked to people about Falun Gong and distributed desktop calendars in Shixin Town on the afternoon of October 21, 2016. They are held in the Panjin City No. 3 Detention Center.

Yao Sheng and other officers from the Dongwu Road Police Station went to Ms. Wang Xiuzhen's home on the afternoon of October 17, 2016. They tried to force Ms. Wang to write a guarantee statement to stop practicing Falun Gong.